A little update on the ongoing search for planets. NASA confirmed yesterday that the Kepler telescope has successfully located two planets of Earthlike size and mass. After the 'twin' planet of Kepler-22b getting all the fanfare, this latest discovery has slipped by with little fanfare, yet it's just as significant, since these are the first confirmed terrestrial planets of comparable size to our own.

The two planets have been located in star system Kepler-20, which has now been thoroughly investigated and has previously revealed three larger planets. With five planets, Kepler-20 is quite a busy system, although not the most populous known (HD 10180 and Kepler-11 both have a confirmed six planets, still behind our own system with its eight major planets). Kepler-20 is about 290 parsecs away (that's nearly 950 light years) in the constellation of Lyra, and is a reasonably close match to our own Sun.

So, these two new worlds, designated Kepler-20e and 20f, are the smallest ever found. Detecting planets this small isn't easy. There's a good article here on the discovery, which explains some of the long process that was required to confirm the discovery. There's also a nice little animation illustrating the planetary system.

The previously trumpeted planet Kepler-22b has a radius approximately 2.4 times that of Earth, while the previous record holder of smallest exoplanet was K-10b, the first confirmed terrestrial exoplanet with a radius of 1.4 Earths. It's clear to see that the Kepler project has been slowly getting closer to an Earth-sized planet. Now it has been rewarded with two. K-20f is the larger of the two, at 1.03 Earth radii, while its sibling K-20e is only at 0.87 of Earth's radius; roughly the size of Venus. 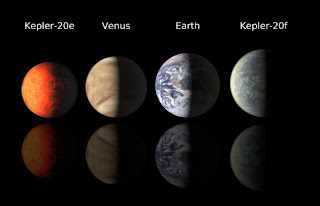 However, there's no use getting excited about alien life forms or comfortable planetary colony sites. All the planets found orbiting Kepler-20 do so much closer than Mercury does the Sun. K-20f is the outermost, and orbits in only twenty days. There is a slim chance it may retain an atmosphere of heavier chemicals - water vapour, perhaps - but K-20e, is in a six-day orbit, with an estimated surface temperature of 1040K, so there's no chance of it retaining any atmosphere.

It's a peculiar system altogether, really. Planet b is the innermost, followed by planets e, c, f and d - which means it's running big, little, big, little, big. The three larger planets are probably gaseous, and are somewhere in the super-Earth size band, smaller than Neptune - hot gas dwarfs. It's a far cry from our own system, with four terrestrial planets, two huge jovian gas giants and two smaller, colder gaseous planets, all much further from the Sun and from each other. It seems that the Solar System is by no means typical for the galaxy. It'll be very interesting to see what the next few planetary systems turn out to be like.

UPDATE: Only hours after I posted this, a further discovery was announced, detailing two planets found orbiting the star KOI 55 (aka KIC 05807616), a dying subdwarf. The two planets, KOI 55.01 and KOI 55.02 are even smaller than Kepler-20e, at 0.76 and 0.87 Earth radii respectively, and they have extraodinarily close orbits that last only a matter of hours. Betsy Green, one of the researchers on the project, has issued a statement saying that KOI 55 must have previously been a red giant star, having long since passed through this phase of its existence, and that the planets must have been drawn inside its mass during its giant period. Furthermore, to have survived this immersion in the star's outer layers, the planets must once have been gas giants, with their thick atmosphere's taking the brunt of the star's energy. The fluid layers would have been stripped away, leaving the dense metallic cores behind. Such planets, known as Chthonian planets, have been theorised before, but never definitively identified.

There's a detailed article on the findings here at the Daily Galaxy.
Posted by Daniel Tessier at 18:40