Things to look forward to in the Whoniverse

I'm supposed to be writing some fan-fiction, but I feel like I've swallowed a cactus and my brain seems to have turned to porridge. So I'm going to attempt to get myself in the Doctor Who mind set properly. I've rewatched The Doctor's Wife and listened to part two of Serpent Crest, and am now amusing myself by looking ahead to what's to come in the world of the Doctor.

The Radio Times has a nice preview ahead for the Christmas special, The Doctor, the Widow and the Wardrobe. I'm starting to really look forward to this one. I enjoy the RT articles on Doctor Who - they usually get the balance right, neither fawning over the show or mercilessly tearing it apart, and, while I might not necessarily agree with a review, I always feel the reviewer has been fair in their appraisal. RT previews often put a little hint in for diehards, letting them know of a reference to watch out for. It's a fun little fan game. Apparently there's a nod to a 1984 story in this one, so I'm hoping the Malus is hiding somewhere in the woods. Plus, there's a host of new images, including this marvellous one of Bill Bailey in a spacesuit: 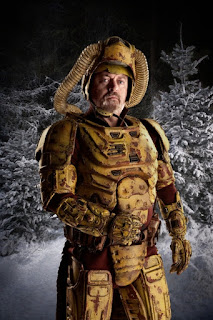 I adore Bill Bailey, and I'm pleased to see that he hasn't changed his classic bemused expression for his Who appearance. Whenever I see him on TV, he always looks as if he was expecting to be somewhere else, as if he's just walked into the wrong room.


There's plenty to look forward to in the upcoming year, too. While we still don't know exactly what form the next series will take, it looks as though we'll have to wait till autumn. While I agree with the above article that a Hallowe'en special is overdue (we almost got one with The Waters of Mars), perhaps a return to the Easter special would make the wait more bearable. A light, springtime adventure to keep us going, before settling in for a cosy, spooky set of autumnal episodes.

Big Finish have plenty of exciting things on the cards for 2012. Tom Baker is back as the fourth Doctor, following up his batty run in Paul Magrs's three series with some new adventures seemingly set between the fourteenth and fifteenth seasons. These will reunite him with Louise Jameson as Leela, something to very much look forward to, and while I like the Magrs stories with Mike Yates and Mrs Wibbsey, it's nice to look forward to some classic-styled adventures for Doctor 4. Plus, Geoffrey Beevers is back as the Master in one of them, which is always good news. Then there's the Fourth Doctor Lost Stories box set, with one serial for Tom and Louise and another for Tom and Mary Tamm as Romana. All tempting stuff.

I'm also hugely tempted by the spin-off series Counter-Measures, which takes the Intrusion Countermeasures Group from Remembrance of the Daleks off on new adventures. It's a Sixties period piece, described as "a mix between Doctor Who, Quatermass and Doomwatch" and it features the wonderful Pamela Salem, always Who's best example of mature, thinking-man's totty. Very excited about this. Of course, I still haven't found the spare cash to get Jago and Litefoot, the last spin-off I was hugely excited about, and that's set for its fifth series, so I've definitely got some catching up to do. 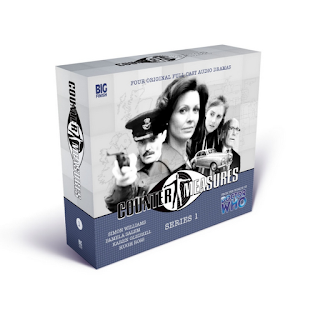 Where the money is going to come from is a problem. I've already ordered the new Eighth Doctor box set, which isn't due out for a year but is on a limited special offer, plus the super-cheap Sixth Doctor Downloads for a pound each, and  the upcoming third series of Iris Wildthyme. Big Finish really need to sit back for a little while and give us all a chance to catch up at our own speed.

Speaking of Iris Wildthyme, Obverse Books are very soon to bring out the latest Iris anthology, Iris in Purple. It's a bit overdue, but with these guys you know that's just because they mean to get everything absolutely right. I'll be reading and reviewing that as soon as it arrives on my doorstep. Obverse have been busy boys this year, as this blog entry from Stuart Douglas shows, and I'm sorry to say I still haven't ordered the Obverse Quarterly series. Another one to spend the Christmas bonus on, I guess. Not too mention the next Faction Paradox volume. My pockets can't take this. Tricky decisions to be faced regarding my frivolity expenditure, it seems.

Finally, the few classic Doctor Who serials not to be novelised are slowly being seen to. Not only is Gareth Roberts novelising Shada, but it seems that an audio novelisation of Resurrection of the Daleks is on the way. Mind you, I don't much care for Resurrection, but it bodes well for the superior Revelation, and hopefully my very favourite serial, City of Death. Still, I think the cover for Shada is dreadful: 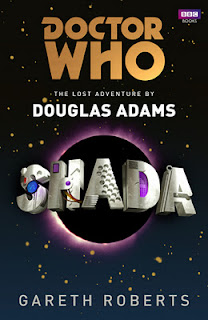 I can see what they've tried to do, with a Hitchhikers-y feel to it, it just doesn't quite work. It looks more like a kid's book than any of the kid's books the Beeb have brought out about the series. Still, who cares about the cover - it's the contents that counts.

I'm off to look for change down the back of the sofa...