Some interesting stuff has lately been reported about the asteroid Vesta. The spaceprobe Dawn has entered orbit of the rock and sent back its first set of data, confirming the long-held theory that Vesta has a layered, planet-like structure. The BBC , Nature and New Scientist articles go into more detail, but essentially it's been confirmed that Vesta is a remnant protoplanet, although why it never absorbed more of the matter around it to reach full planet-hood is unknown. Also pretty cool is further confirmation that most of the meteorites that have landed on Earth over the millennia have been chunks of Vesta, knocked out by some pretty whopping collisions early in its devlopment. If it hadn't been for its molten core, it would have shattered into many smaller fragments, instead of retaining its structure. 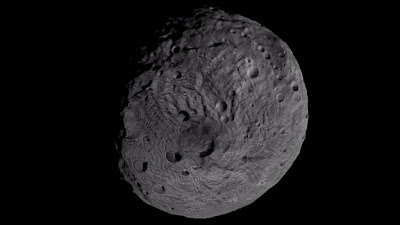 Vesta is the second largest body in the Belt (at least by mass - Pallas might be broader). It's nowhere near the size of the largest, Ceres; while Vesta makes up approximately 9% of the mass of the Belt, Ceres makes up over 30%. Ceres is considered both the largest Main Belt asteroid and the smallest dwarf planet. Considering its size, structure and spheroid shape, Vesta makes a good candidate for an upgrade to dwarf planet status. There's clearly plenty more to learn about our Solar System. I look forward to more telemetry reports concerning Vesta, and for some new info on Ceres when Dawn proceeds there in the near future.
Posted by Daniel Tessier at 12:50