Captain Kirk vs. the Romulans

The Mission: Investigate the attacks on  Earth outposts along the Romulan Neutral Zone.

Planets visited: None. We do get visual contact with Earth Outpost 4, one of seven such outposts built into asteroids along the Federation side of the Neutral Zone.

Looking at the chart we see in the episode, we can get an idea of the layout of this region of space. Strangely enough, although the crew talk of the planets Romulus and Remus, we see points on the map labelled as Romulus and Romii. Some fans have suggested that Romii must be the native Romulan name for Remus, or that it simply represents another designation, maybe ‘Rom II.’ However, the Neutral Zone is later established as being a light year across, and the Romulan homeworlds as being sister planets in the same system. The chart therefore shows that Romulus and Romii are about a light year apart, so they must be neighbouring star systems. So Romii is just another system, very near to the one containing Romulus (and also Remus).

Famous Firsts: First appearance of the Romulans. First role for Mark Lenard in the series.

Future History: Over a century before this episode, Earth forces fought a war with the Romulans. Spock describes it thus: “This conflict was fought, by our standards today, with primitive atomic weapons and in primitive space vessels which allowed no quarter, no captives. Nor was there even ship-to-ship, visual communication; therefore, no human, Romulan, or ally has ever seen the other.”

A lot of this has been retconned into submission by the Enterprise series, which is set during the lead-up to the war (and presumably would have shown it, if it hadn’t been cancelled). The technology we see in Archer’s time is more advanced than that which Spock describes; however, the series sticks to continuity by not having any human or Romulan force see each other face to face. Some Vulcans, however, were in contact with the Romulans, although this was part of a conspiracy so presumably wouldn’t be common historical knowledge. Spock mentions allies - Enterprise suggests the Vulcans, Andorians and Tellarites were also involved in the war on the side of Earth, and Star Trek Nemesis informs us that the Romulans used Remans as ground forces, which might also help explain the lack of human-Romulan contact.

Alien Life Forms: The Romulans make their first appearance. The crew are stunned to see that they look like… Mr Spock! (Actually, the first one they see looks like his dad.) Spock recommends attacking the Romulan forces on the basis that “Vulcan, like Earth, had its aggressive, colonising period,” and that any Vulcans who still lived this way would be extremely dangerous. The fact that they look like Vulcans throws some suspicion on Spock, especially from Crewman Stiles, whose family fought in the Romulan War. (Funny how nobody ever becomes suspicious when aliens who look just humans show up and start acting maliciously, isn’t it?) 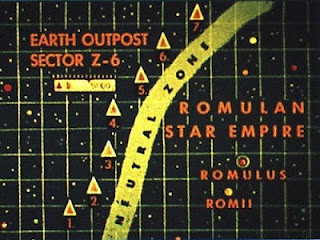 The Romulan society is clearly loosely based on the Romans: they rule an empire, wear helmets, have ranks like Centurion and names like Dacius, etc. Given how long Vulcans live, some of the older Romulans may have even fought in the war with Earth.

Future Treknology: The Romulans fly a ship called a Bird-of-Prey, which has been painted with an eagle design on its underside. It’s fitted with a cloaking device to allow it to become invisible, something previously thought practically impossible due to the energy requirements (another thing retconned by Enterprise, in which both the Romulans and Suliban use cloaks). It has to de-cloak to fire its new, powerful weapon, a device that fires an extremely powerful ball of plasma. Luckily, this has a limited range. It also carries nuclear warheads for sneak attacks. Scotty says the ship’s power is “simple impulse” and can therefore be outrun. He surely can’t mean it’s limited to an impulse engine, or it would be incapable of travelling interstellar distances.

Captain James T: Rises to the challenge on an extended game of cat-and-mouse with Romulan ship, despite balking at the concept of initiating war with the Empire. Uhura reports that Command will back his decision, so they clearly have a great deal of faith in him. He immediately defends Spock against Stiles’s accusations. The Romulan Commander admires him; in his last moments, he even declares that “In a different reality, I could have called you friend.” (A different reality, eh? Perhaps in a future movie…?)

Green-Blooded Hobgoblin: Does little to defend himself against Stiles’s accusations. He considers attack a logical choice of action in these circumstances. He doesn’t hesitate to rescue Stiles from the gas leak in the phaser room at the risk of his own life - although he does make sure to fire the phasers first.

Trek Stars: Mark Lenard, later to be better known as Sarek of Vulcan, plays the Romulan Commander. He’s fantastic as a man worn down by years of military service, sick of seeing his comrades killed in front of him. He gets to say things like “Danger and I are old companions” and genuinely makes it sound serious.

Sexy Trek: Kirk and Rand have a squeeze when it looks like they may be facing destruction at the hands of the Romulans. Kirk acts to marry two of his officers in the opening scene; the wedding is never completed, and it's painfully obvious that the groom will be killed during the course of the episode.

Verdict: Excellent. This is Star Trek as a submarine movie, a tense battle between two captains where phasers are fired like depth charges and war is fought against a silent, hidden enemy. The Romulan bridge evens seems to have a periscope. The episode is made by Kirk and Lenard’s performances as equal yet opposing commanders. 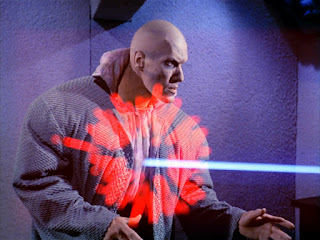 Captain Kirk vs. the Androids

The Mission: Recover a noted archaeologist from exile on a deserted planet.
Planets visited: Exo-III. Like Psi 2000, Exo-III was Earthlike until its sun began to dim, half a million years ago. The surface is now covered in ice and unfit for habitation. As the Exo sun dimmed, the population moved undergound, creating a mechanistic society in the caverns.
Alien Life Forms: Were the original inhabitants of Exo-III humanoid? Their building of androids suggests so. However, Ruk refers to them as “the Old Ones,” and given that scriptwriter Robert Bloch also wrote Cthulhu Mythos stories, we could be dealing with Lovecraftian horrors from the dawn of time. But probably not, he probably just liked the sound of the phrase.
Future Treknology: Before the Old Ones died out, they invented a process of creating autonomous, intelligent androids. The androids were so sophisticated that they eventually tired of their irrational masters and wiped them out. After millennia passed, only one android, a great big bloke called Ruk, was left. Superhumanly strong and with the most impressively deep voice, Ruk was discovered by archaeologist Dr. Roger Korby. Korby also discovered that the android making equipment still survived in working order. Korby was dying from exposure, so Ruk replaced him with an android. Korby went on to create a simplistic copy of his assistant, Brown, and a sexy female android called Andrea, before the Enterprise arrived.

Korby plans to repopulate the Galaxy with androids as a replacement for humanity. When he fails to convince Kirk to join him, he uses his android maker to replace him. This machine is a pinnacle of sophistication which involves strapping the subject to a table next to a lumpy ‘blank’ android, then spinning them both round really fast until the blank takes on the features of the original. Memories and personality are then copied, although Kirk is able to pass on mental suggestions that jeopardise the android’s work.

Korby seems a bit uncertain about his regard for androids, sometimes declaring that they shall replace the human race and at others claiming that human beings are superior, and androids are just things. Still, becoming an android has evidently sent him nuts.
Captain James T: Kirk refuses to have any part in Korby’s plans. He’s distrustful of him from the very start, and rightly so, yet he’s surprisingly sensitive of Nurse Chapel’s feelings for the man. His manipulation of his own android double, leaving it with the suggestion to call Spock an interfering halfbreed, is ingenious.
Shirtless Kirk Alert: He gets everything off for the android making process - and by the end of it there are two of him showing off the pecs.
Green-Blooded Hobgoblin: Spock immediately realises something is wrong when Kirk racially insults him, knowing that it must be a message that something is wrong. He does decry the term halfbreed as unsophisticated, though. Chapel asks him if he’s ever been engaged. He declines to comment, but the truth will come out in time. (See ‘Amok Time’ later.) He charges in to save the day at the end, only to look quite crestfallen when he realises Kirk and Chapel are actually fine on their own.
The Real McCoy: Dammit, Jim, he’s not even in this one! Neither, for that matter, are Scotty and Sulu.
Nurse! After some early appearances, Nurse Christine Chapel gets a major plot strand to herself. She’s an intelligent woman, dedicated to her career, but regrets leaving her fiance Roger Korby behind. Majel Barrett, who was married to Gene Roddenberry, the Trek creator, was previously Number One in ‘The Cage,’ and will return as Lwaxana Troi in TNG and DS9. She also provided computer voices all the way up to the 2009 movie, before her death, making her probably the most prolific actor in all of Trek. She also has amazing legs.
Sexy Trek: So, Andrea. Well, she’s gorgeous. If I had to design an android companion, it might well look like Sherry Jackson. Seriously, though, it’s all a bit gross. She responds to Korby’s commands to kiss and then slap Kirk without trouble. When Kirk kisses her later (and he really goes for it), she tries to slap him again! But she struggles because she “wasn’t programmed for [Kirk].” OK, so that means she really was programmed for Korby, whatever he might say about her just being a thing. She’s clearly been designed as a cyber-sex toy.
Cliché Count: The first appearances of some classic Trek clichés here. The first of many episodes featuring androids, the first time that Kirk seduces/confuses/turns an alien female with the power of his mighty kiss, and an early outing for artificial intelligence being confused to death, when Korby and Andrea die together as their programming crashes. We’ll see these things a lot.
Verdict: Good, straightforward fun. Although there are some questions on the nature of artificial intelligence, this isn’t the deepest episode of Trek, yet it’s a good, solid slice of sci-fi action.
Posted by Daniel Tessier at 23:57