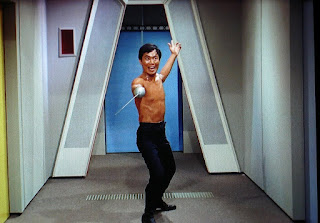 TOS 1.6: The Naked Time
or
Captain Kirk vs. the Sweat of Madness

The Mission:
Observe the disintegration of planet Psi 2000 at close range, and discover what killed the scientists stationed there.

Planets visited: Psi 2000: Once a planet much like Earth, now frozen due to the dimming of its sun. Now it is breaking up completely, undergoing unpredictable changes in size, mass and other properties. It is also home to a unique polymer of water, which infects humanoids, intoxicating them. This aggravates their emotional responses, and is passed from person to person via perspiration. Or, to put it another way: everyone goes sweaty and crazy.

Space Bilge: OK, I’ve just got to get this one out of the way right now: Crewman Tormolen is entirely to blame for the entire situation here. He beams down to the planet with Spock, both in full-body isolation suits to avoid contamination with whatever killed the scientists. Then, when he’s alone, in a stunning display of idiocy and unprofessionalism, he takes off his glove, touches one of the bodies, then touches his face. Is it any wonder he dies? It’s amazing the ship is even running at all with people like that on the staff.

Why don’t Uhura and Kirk contract the infection when they’re handling sweaty topless Sulu? It’s ages before they show symptoms.

Captain James T: Manfully holds himself together for a good while, before becoming thuggish and angry, before finally sobbing about how much he fancies Yeoman Rand. He gives Spock a good slapping to try to knock some sense into him; one slap from Spock sends him flying across the room.

Shirtless Kirk Alert: Nope, it’s Sulu this time. Kirk does get his sleeve ripped off though.

Green-Blooded Hobgoblin: Leonard Nimoy is clearly the best actor on this show. He’s amazing here in his portrayal of Spock as he's torn apart by his uncontrollable emotions, both ashamed at showing them and expressing a secret longing to let them show at all times like the rest of the crew.

Spock’s pulse rate and blood pressure are much lower than human normal.

Funny Bits: Sulu goes completely nuts, turning into a swashbuckling fencer, ripping off his shirt and running topless down the corridor. He attempts to ‘rescue’ Uhura. “I’ll protect you, fair maiden,” he exclaims, to which she replies, brilliantly, “Sorry, neither!”

Crewman Riley gets his Irish going, locking himself in engineering and ordering ice cream for the whole crew between bouts of drunken Irish caterwauling.

Cliché Count: Scotty gets to say “I can’t change the laws of physics!” for the first time.

Time Travel: When escaping from the gravity well of the planet, the Enterprise enters a time warp and is thrown back in time by 71 hours. This is the first example of time travel in the series, but it won’t be the last. This technique will come to be known as the slingshot effect and will be used several times in the future (off the top of my head, in episodes “Tomorrow is Yesterday” and “Assignment: Earth” and the movie Star Trek IV. The journey back in time causes the chronometer to roll backwards, which makes no sense - surely time should be moving in the same direction for the ship and the crew?

Verdict: Awesome. Unlike the later TNG version “The Naked Now,” this shake-up of the crew’s emotions actually lets us get to know their personalities better, brilliantly exploring hidden sides to their characters: Spock is torn between his Vulcan upbringing and his human emotions; Kirk feels cut off by his command; Sulu is stifled by his life in Starfleet; Nurse Chapel is in love with Spock. Not all of these elements will be fully explored in the future, but they set up much needed characterisation early in the series. Plus it’s truly funny in parts, without losing a real sense of jeopardy. 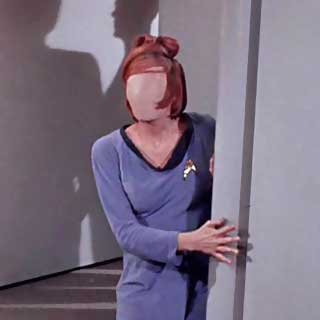 Captain Kirk vs. the Psychic Teen

The Mission: Transfer Charlie Evans, the only survivor of a spaceship crash on the planet Thasus, from the starship Antares to Earth Colony 5 (aka Alpha 5).

Planets visited: None, we see neither Thasus nor Colony 5.

Future History: UESPA is given as the organisation to which the crew is answerable. It stands for United Earth Space Probe Agency. It’s exact relationship to Starfleet, which was invented for a later episode, is uncertain, but it seems that they may be separate organisations which operate together for some missions.

Captain James T: Acts as a father figure for Charlie. Amusingly, for such a hot-blooded male, he gets embarrassed talking to Charlie about the facts of life. He isn’t afraid to stand up to the boy, even when he knows he has the power to destroy him, and correctly deduces when his power is waning. Even after all he’s done, Kirk defends Charlie when the Thasians arrive to take him away.

Green-Blooded Hobgoblin: Spock is surprisingly upbeat and emotional in this story; exchanging banter in the recroom and even putting up with a serenade from Uhura for the crew’s entertainment - which describes him as appearing “satanic.” Charlie takes a severe dislike to him after he beats him at 3D chess, and makes him spout poetry.

Charlie Boy: Robert Walker is excellent as Charlie, gaining the viewers’ sympathy in the early acts before turning the character into a potent threat. The young man’s adolescent nervousness and temper become a frightening trigger to his great powers. Apparently, Walker deliberately didn’t associate with the other cast members in order to maintain a sense of isolation for his character.

Some of Charlie’s ‘punishments’ are horrific, notably the sudden ageing of a young female crewmember, and a truly disturbing moment when he removes a laughing woman’s face, leaving her completely blank (a sequence that ends very suddenly, implying that it was perhaps originally longer but was cut back by censors). Seemingly, all the affected crew are returned to their original states by the Thasians, although they aren’t able to restore the dead crew of the Antares starship.

Sexy Trek: Charlie gets a crush on Yeoman Rand, slapping her on the asteroid and following her about, before she rebukes his advances in her quarters and he “makes her go away.”

Earlier, Rand tried to get Charlie to transfer his attentions to a younger crewmember, Tina. Personally, I preferred her, but Charlie turned her into an iguana.

Author, Author: This is the first script by the excellent writer Dorothy Fontana.

Alien life forms: The Thasians are a near-mythical race of beings native to the planet Thasus. All surveys of the planet have shown no native life, but the Thasians exist there as incorporeal energy beings. The Thasian who communicates to the bridge crew appears as the shimmering green face of an older man, claiming it to be his form of “centuries ago.” Their ship appears to made from the same green energy (it’s a fuzzy blob in the original episode, but given a more distinct, yet still nebulous, structure for the remastered version). They have incredible psychokinetic powers, which they granted to Charlie to allow him to survive as a child. He is terrified of returning to them, claiming they have no emotions, but it is clear he would never be able to live among humans.

Verdict: Another very strong episode for Star Trek’s early run. The combination of fine writing and careful characterisation by the actors keeps our sympathies with Charlie, even as we begin to fear him and his power. It could have done with a little more clarity regarding the limits of Charlie’s powers, but the sense of threat would perhaps have been lost. It’s tempting to wonder what happened to Charlie down on Thasus after this.