I'm sure most of you will be aware that Caroline John passed on June 5th. She was 71.

To any who don't know of her: Caroline John played Dr Elizabeth Shaw in the seventh season of Doctor Who, broadcast in 1970. Naturally, she also played numerous other roles throughout her career, but she will be best known for playing Liz. Much of her acting career took place on the stage, so most of her roles will have been seen by far fewer people than her time on Doctor Who. I recall her appearance in an early episode of Agatha Christie's Poirot (a wiki check reveals that it was 'Problem at Sea'). In this she appeared alongside her husband Geoffrey Beevers, who will also be forever remembered for one role by Doctor Who fans: he played the 'interim' incarnation of the Master in Tom Baker's penultimate story, The Keeper of Traken.

Liz was the ridiculously overqualified assistant to the third Doctor, Jon Pertwee, in his first year. Although she was brought in ostensibly to be UNIT's scientific advisor, the Doctor usurped her position and she was relegated to carrying test tubes and looking good in a miniskirt. Caroline John only stayed for one season - she left to have a child - and was replaced by the wonderful Katy Manning as the ditzy Jo Grant. Even so, her short tenure as a regular showed what an excellent actress she was. Liz came across as a believable character, with Caroline John bringing to life a well-written role. Liz had a strong mind and great self-confidence, sure in the knowledge that she was by far the intellectual superior to her commanding officer, Brig. Lethbridge-Stewart (Nicholas Courtney, also lost to us recently). But she had a fine sense of humour, which set her apart from so many of the aggressively strong female characters that had begun to appear on television in the late 60s and early 70s. She made an occasional glib comment about '"female emancipation," but unlike so many supposedly feminist characters, Liz didn't feel the need to broadcast her views. She was a talented female scientist and she didn't tell us, she showed us.

Liz would have been better served as a character as the scientific focus of a series itself, but she was created to be an assistant for the Doctor. Fortunately, John and Pertwee had some great onscreen chemistry. Unlike most companion characters, Liz never travelled in the TARDIS - indeed, she had trouble accepting it as a travelling device at all. She was a different sort of character, and although she had her origins in the super-brainy companion Zoe from the previous year, she became a very distinct character in her own right, even over a mere twenty-five episodes. Indeed, in her last story, Inferno, she spent much of the story playing another version of the character, the parallel universe Section Leader Shaw, who was distinctly different yet recognisably Liz.

Caroline John returned to Doctor Who on television twice, but neither occasion was terribly noteworthy. Once as a sort of spectral figure of Liz, in The Five Doctors, in 1983, the other as the Liz 'phase' of the companion run-down in 1993's god-awful charity skit/Eastenders-crossover, Dimensions in Time. What happened to Liz after she left UNIT and returned to academia is a source of much fan debate, and the expanded universe stories have portrayed various 'last stories' and contradictory fates for the character. Onscreen, the last we heard of her was in the SJA story Death of the Doctor, in which it is revealed she is unable to attend the Doctor's funeral because she is currently working on the Moon.

Caroline John didn't leave the role behind though. She appeared in BBV's direct-to-video series P.R.O.B.E, in which author Mark Gatiss created a new posting for Dr. Shaw - part of the Preternatural Research Bureau. Following news of John's death, I got hold of one of the films - the second of the four, The Devil of Winterbourne. Although clearly an amateur production, I was very impressed, and I loved the pipe-smoking older Liz! It's definitely worth digging out if you're a Whohead, and stars other familiar faces (or voices, in some cases), including Peter Davison, Louise Jameson, Terry Molloy and, of course, Mr John again, Geoffrey Beevers. It's also worth a look if you're a League of Gentlemen fan, as a chance to see a very young Mark Gatiss and Reece Shearsmith - although there's not a lot in the film that can be described as 'preternatural.'

Liz also returned in audio productions for Big Finish, in four releases of the Companions Chronicles series, the latest of which has yet to be released. Caroline John previously played Madame Salvadori in the BF audioplay Dust Breeding, which reintroduced her husband to his role as the Master, this time battling Sylvester McCoy's seventh Doctor. While it's a treat to hear her in a fruity role like Salvadori, it can't compare to having Liz back. The character certainly made an impression on many fans; for example, she was brought back as the Doctor's companion for the first few stories of The Doctor Who Project - also featuring the seventh Doctor facing the Master. (I'm also convinced that Noomi Rapace's character from Prometheus is named after her.) Fans can also hear John's excellent readings of several audiobooks based on three of the four the stories that made up her year on Doctor Who; the remaining story, The Ambassadors of Death, has not had its novelisation read for audio to my knowledge, and is also awaiting a restored DVD release.

Sadly, once Big Finish's final Chronicle for Liz is released, there will be no new material featuring Caroline John. One of the best of Doctor Who's many regular leads, she will be missed. My sympathies go out to her husband, children, family and friends. Big Finish have published a short tribute, and the very talented BabelColour has produced a short video tribute for her, available on YouTube. 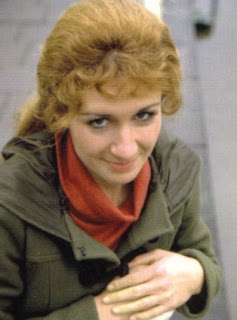 Email ThisBlogThis!Share to TwitterShare to FacebookShare to Pinterest
Labels: Doctor Who, Doctor Who Classic, legends