Episode Three of The Minister of Chance is now available for download, free of charge. All you need to do is click here, and you can get an hour-long audio drama in either iTunes-friendly or basic MP3 format.

What more can I say about The Minister of Chance? Well, it's a crowd-funded professional radiophonic production featuring some truly immersive soundwork and some fabulous concepts. The Minister is a defrocked Time Lord, originally played in the Doctor Who webcast Death Comes to Time by Stephen Fry, now regenerated into the tougher, but no less sardonic form of Julian Wadham. Apparently, these are in fact his third and fourth incarnations, leaving at least two more Ministers unheard. Don't worry, you don't need to be a Who Head to love The Minister of Chance; it takes place very much in its own corner of the universe, but what a fascinating corner that is. Doors access the bridges between worlds; powerful travellers stride across them, interfering in the affairs of lesser civilisations; warrior cultures ruled by witches invade and destroy societies based on rationality and science.

Episode Three, 'Paludin Fields,' sees the political situation of the nation of Tanto become more complex, and sets the Minister further on his path to confront his nemesis, the mysterious Horseman. It also introduces the wonderful Tamsin Greig as the enigmatic and irascible Sage of the Waves, and features an impressive cast of regulars: Jenny Agutter, Paul McGann, Sylvester McCoy, Lauren Crace, Beth Goddard, even Simon out of 'Trev and Simon.'

It's well worth a listen, and it won't cost you a penny. 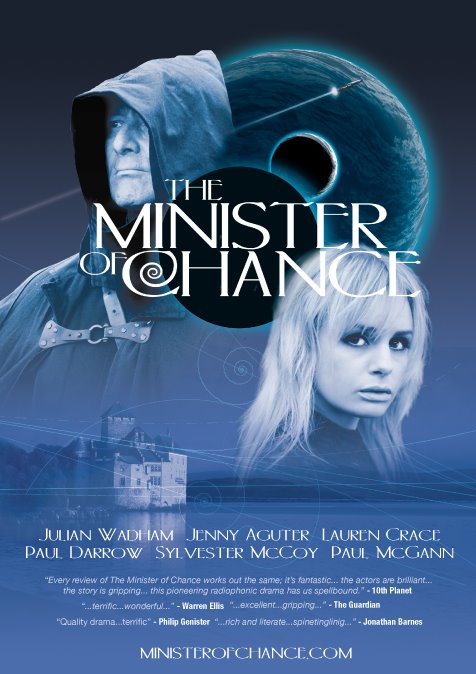 Email ThisBlogThis!Share to TwitterShare to FacebookShare to Pinterest
Labels: audiobooks/audioplays, Doctor Who, Minister of Chance