An impressive ten years after it first began, the Gallifrey audio series comes to a conclusion with its sixth set of episodes. Having begun as an intricate political serial detailing the crossing and double-crossing of the highest echelons of Time Lord society, the series took a diversion into a series of adventures in parallel realities. The fifth series is widely considered as a misstep by followers of the range, so much so that, I confess, I haven't actually bothered to download and listen to it. With the sixth series promising an explosive finale, however, I was tempted back to the range, and, for the most part, I am happy that I did so.


Gallifrey VI begins with Extermination, and with a title like that, even the cover illustrations are unnecessary to guess who's joining the fray. The Daleks previously invaded Gallifrey back in 2000 in The Apocalypse Element, the repercussions of which are felt here. Indeed, Big Finish doesn't make things easy for anyone who hasn't been following the plethora of Time Lord related material they and the BBC have produced over the years. This is high geekery, written for the sort of people who know a Prydonian from a Perigosto stick. In Extermination, Scott Handcock gets to play with the full toybox, having the Daleks invade a parallel Gallifrey inhabited by non-time active Regenerators in place of Time Lords. With the access this gives to the reality-spanning Axis, the Daleks are poised to take on a position of supreme power. Thankfully for the Multiverse, these Gallifreyans have poured their energies into weapons development in place of time technology, so Romana, Leela and Narvin have a chance of fighting back. The latter pf the three, played by Sean Carlsen, has developed significantly from the once untrustworthy head of the Celestial Intervention Agency, and is now a trusted member of Romana's inner sanctum. Leela, played, as ever, with perfection by Louise Jameson, is also much removed from the noble savage we once watched travel with the fourth Doctor. For all the wisdom she has gained over the years, however, Leela is recognisably the same individual as the Janis thorn-wielding warrior, and remains the heart and soul of the Gallifrey series.


It is Romana who gets the most exploration in this final serial, however. In Extermination, her treatment at the hands of the Daleks, both way back in Destiny of the Daleks on television, and later in The Apocalypse Element, are revealed to have significantly hardened her character. This is a woman who was held captive by the Daleks for decades, and still came back to rule the most powerful civilisation in the universe. If Romana is the leader upon which Gallifrey relies, then Lalla Ward is the lynchpin of the series' success. She puts in a particularly powerful performance here, especially in a scene that puts in a similar position to the Doctor in the celebrated episode Dalek – and shows much further than him she is prepared to go.


The second instalment, Renaissance, brings us the most celebrated and exciting element of this set: the new Romana. Now, don't cry spoiler – Big Finish have certainly not been quiet when it comes to their guest star, Juliet Landau, playing Romana's future self. I was a little wary of this casting; as much as I loved Landau's batty performance as Drusilla on Buffy, her English accent was hilariously off. Having an American play someone as upper-class English as Romana is questionable, but Landau is spot on (and nails the accent this time round). Having utilised a time-twisting villainess and alternative realities to bring Mary Tamm's Romana I back in previous seasons, having a future Romana turn up for the finale is an idea so obvious it's amazing BF haven't tried it sooner. The new Romana – going by the name Lady Trey (as in Romanadvoratrelundar) - is recognisably the same Time Lady but different enough to be interesting, veering from kooky, huggy and enthusiastic to icily calm and unnervingly ruthless. Indeed, it's Lady Trey's darker moments that remind us just how ruthless the Romana we know can be – they bring out both the best and worst in each other. She's a triumphant creation by actress Landau and writer James Goss. 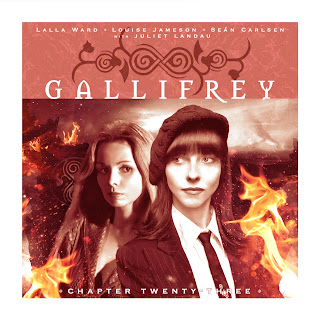 Indeed, Goss's writing is top notch throughout. Renaissance is a brilliantly structured story, moving from a mysterious, slow burn intro to a thrillingly exciting climax. Finally, we're back on the real Gallifrey, so events finally feel like they mean something again. Romana II and Leela have rarely been written so well; you can really believe the friendship between these two very different but equally strong women. Events move with great haste, both Romana's vying for the top spot and each one scheming to exile the other – if you thought two Doctors together could be bitchy, you;ve heard nothing yet. Narvin gets less to do in the foreground but his loyalty to the office of the President gives him some serious scenes. Again, a detailed foreknowledge of Gallifrey and Doctor Who is a must; not only does Goss pepper the script with quotes and misquotes from well-remembered stories, but events throughout are clearly headed in one direction, and that's towards the unmentionable.


OK, so Big Finish never come out and say “Time War,” but, as with the eighth Doctor set Dark Eyes, it's obvious that's where this is heading. As well as the obvious visual clue on the cover – new series-styled bronze Daleks, for once – the story alludes to the destruction of Gallifrey throughout, with Lady Trey hailing from a time when Gallifrey has fallen, determined to shatter the Web of Time and rewrite events to suit the Time Lords. And if that wasn't exciting enough, there's a mysterious figure watching over Romana – perhaps her regeneration isn't too far away? 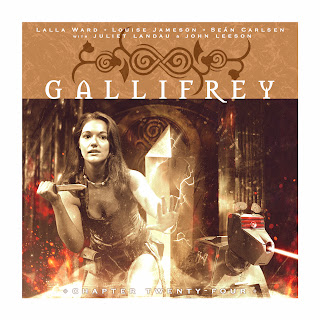 And then... hhmm. Ascension is a great episode in an of itself, but as a finale, it takes some enormous liberties with what has gone before. Pretty much all of Renaissance is undone by the events of Ascension, with writer Justin Richards choosing to invoke the Gallifreyan virtual world of the Matrix to overwrite events, before pushing a huge reset button and wiping out much of the series beforehand. As resets go, it does make sense and packs some real dramatic weight in its moral questions, but as with dream episodes like Amy's Choice or Voyager's infamously frustrating time travel episodes, it robs much of the story of its impact and point. Which is a shame, because otherwise Ascension is good fun, with a huge amount happening and plenty of fascinating ideas. If anything, there's too much going on at once, and as with previous excursions to the Matrix, it's not always clear what's real and what's not. Nonetheless, it does provide Gallifrey with a clear and distinct ending, while at the same time setting up the eventual, inevitable call to War. A qualified success then, depending on your ability to stomach a plot reset.

Point One: Ascension ends with Romana having supposedly defeated the Daleks, only to reveal that Narvin has sent an agent back to intercept the Doctor and send him onto Skaro, setting up the events of Genesis of the Daleks. Not every fan's cup of tea, but the sheer cheek of this made me woop. Narvin is not only responsible for one of Doctor Who's most beloved serials, but, since that story is now considered the Time Lords' first strike in the Time War, he's potentially responsible for the War and the end of Gallifrey itself. And Big Finish can stop pretending that just because they don't say the words “Time” and “War” together, that's not what they're talking about.


Point Two: Lady Trey. It's revealed, in one of Ascension's more frustrating plot twists, that the future Romana is nothing more than a Matrix projection set up by Romana II's near future self. This is all a bit confusing, but it is implied that Trey is a projection of a potential incarnation of Romana, which raises the possibility that the Landau incarnation might one day come to exist.

We've seen future versions of Romana before. Paul Cornell introduced a spectacularly amoral Romana III in the EDA novel The Shadows of Avalon, who might have escaped the (first) destruction of Gallifrey in The Ancestor Cell. Then again, events concerning the War in Heaven and how they relate to the main timeline are unclear at best. Messingham's The Tomb of Valdemar included an elderly future (fourth?) incarnation of Romana, who regenerated, at the novel's close, into a young, dark-skinned successor. The third Romana was written as being played by the late Louise Brooks, but is similar enough to Lady Trey that they could both represent the same incarnation. Alternatively, the Landau incarnation could follow on from the two Valdamar incarnations (presumably making her at least Romana VI).
Posted by Daniel Tessier at 13:18