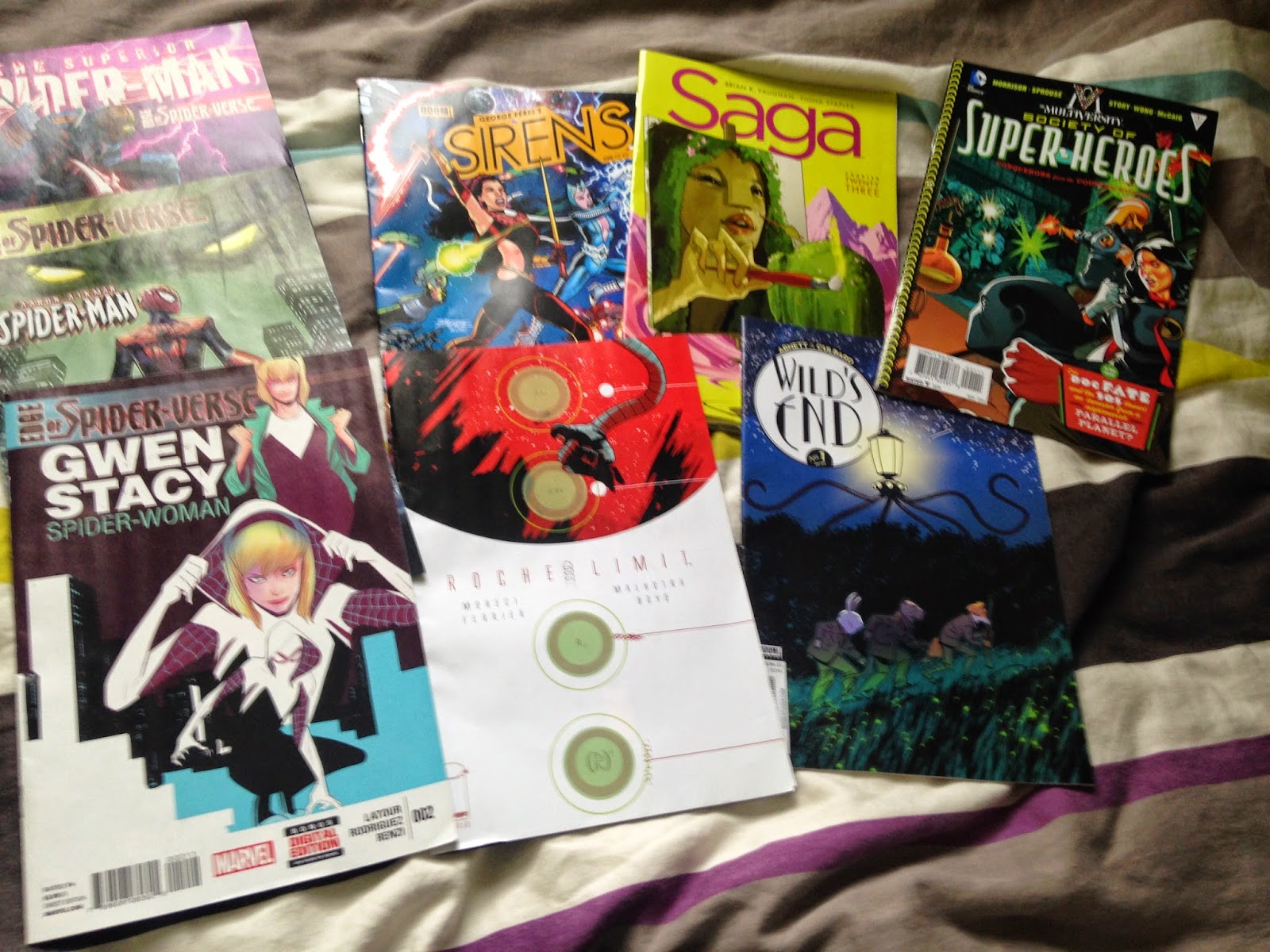 So this is really everything from the end of September. I'm busy, well behind on stuff. Still, here we go. Much Spider-Verse. More to come.

Issue 2 took a little while to get hold of; it sold out overnight at my local shop. Not surprisingly; this is the Gwen Stacy issue, whose reputation was a sky high before it even printed. It lives up to the hype, though. A really fantastic superhero comic, one of the best Spider-Man comics in ages. In an alternative reality where Gwen was bitten by the radioactive spider rather than Peter, things unravel quite differently. Peter is unmasked as the Lizard and bumped off in the first couple of pages, in a flashback to imaginary previous issues. Issue 3 takes a similar approach, written as if it is just the latest issue of a long-running series, The Spider-Man. This one is manga-inspired, with a Nippo-American Spider-Man, Dr. Aaron Aikman, in a complex armoured Spider-suit.

Of the two, Gwen's issue 2 is the better, being a genuinely well-told Spidey tale that just happens to be about the ass-kicking Spider-Woman Gwen Stacy. Robbi Rodriguez's artwork is excellent, perfectly matching Jason Latour's story style. Nonetheless, Dustin Weaver's issue 3 is very good, a fine, surprisingly downbeat sci-fi story. Both are linked to the overall Spider-Verse story, but without it overbearing the individual stories. Really excellent stuff here.

And the other "Edge" story for the month, I think this is the last issue of Superior. Again, this is really very good, and pushes the overall Spider-Verse set-up forward significantly. We have a cybrog Spider-Man, Spider-Man India, Spider-Man Noir, Spider-Monkey (!) all joining forces with Otto Octavius and his team. Karn and his twisted sisters of the Spider-hunting clan turn the whole thing into a massive brawl, but this is, if you will, a superior scrap. It raises the issue that most of the alt-Spidey's are variants on Peter Parker (even the monkey) and that the other Spideys might see the mission in a very different way. It's followed by a brief chapter on the background of the Spider-hunters on Earth-000, battling monstrous Spider-gods. Really something else.

Another solidly told issue of Saga. It's still hard to know what to say about this other than it remains a brilliant installment in a powerful sci-fantasy story. It definitely doesn't feel like it's treading water anymore; things are building up to a big climax this month. I still can't praise Staples's artwork enough. How can someone make a purple-skinned bat-girl look so attractive? Looks like the Robot Kingdom is on the verge of collapse, as is Alana and Marko's marriage. There's some brutal stuff in this issue, but it's tastefully, intelligently told.

Am I the only one who doesn't rave about Perez's artwork? I honestly don't think it's all that. This is his new baby, a sci-fi epic featuring strong female heroes and villains across time and space. Plenty of bang for your buck with Book One, and this is building up to something quite epic, with elements strewn throughout history from the 1st century to the deep future. Yet, it just isn't moving me.

The Multiversity: Society of Super-Heroes (DC)

Another excellent one-shot in this series. "Conquerors of the Counter-World" features Doc Fate and his Society of Super-Heroes, a sort of pulp-era Justice League thrown against their altogether crueler, more deadly counterparts from another Earth. The Earth of the SOS is seemingly a retro-tinged world, contemporary but akin to our 1940s. Their evil alternates from Earth-40 invade, leading to a vast and terrible war, as The Immortal Man is pitted against his own counterpart, the monstrous Vandal Savage. It's brilliantly told, powerful stuff, contrasting the pulpy aesthetic with the reality of the horrors of the forties. And it all seems to building up to something truly massive in the series finale.

Tee hee! This is wonderful. Dan Abnett's new title for Boom! is basically a War of the Worlds/Wind in the Willows crossover. I've been reading a lot of Abnett lately - also bought the Rocket & Groot compendium - and he can do talking animals like nobody else. There's surprising conviction to this, something that could be a throwaway joke played deadly seriously. Culbard's artwork is perfect for the project, setting up a strangely believable country village just about to experience a Martian invasion. Really one to treasure.

The beginnings of what promises to be an excellent new sf series by Michael Moreci and Vic Malhotra. Set on the colony Roche Limit, on a planetoid orbiting an impossible spatial anomaly, this is a potent mix of noir, horror and high concept science fiction. Taking in everything from organised crime to women's rights in its first issue, it looks like the heavier sf stuff is on the way, judging by the final panel. Really, this is very good, and since it's a limited series, I'm confident there's a strong story to come, rather than a rambling ongoing series.

I'm really quite enjoying "The Q Gambit." While to begin with I thought they'd missed a trick by not having Kirk meet Picard (although there are still three chapters left for this to happen), Sisko and DS9 are a much better fit for new Kirk and the modern version of Star Trek. This version of the 24th century is a particularly bleak place, the galaxy carved up between the Dominion and the Klingons, the latter of which have conquered Earth. Naturally, Worf is the king of Earth - he's always a monstrous despot in this alternative universes, have you noticed? One anomaly is that Bashir is working as a medic - how did he get his genetic enhancements in this timeline? Continuity quibbles aside, this is a decent adventure. 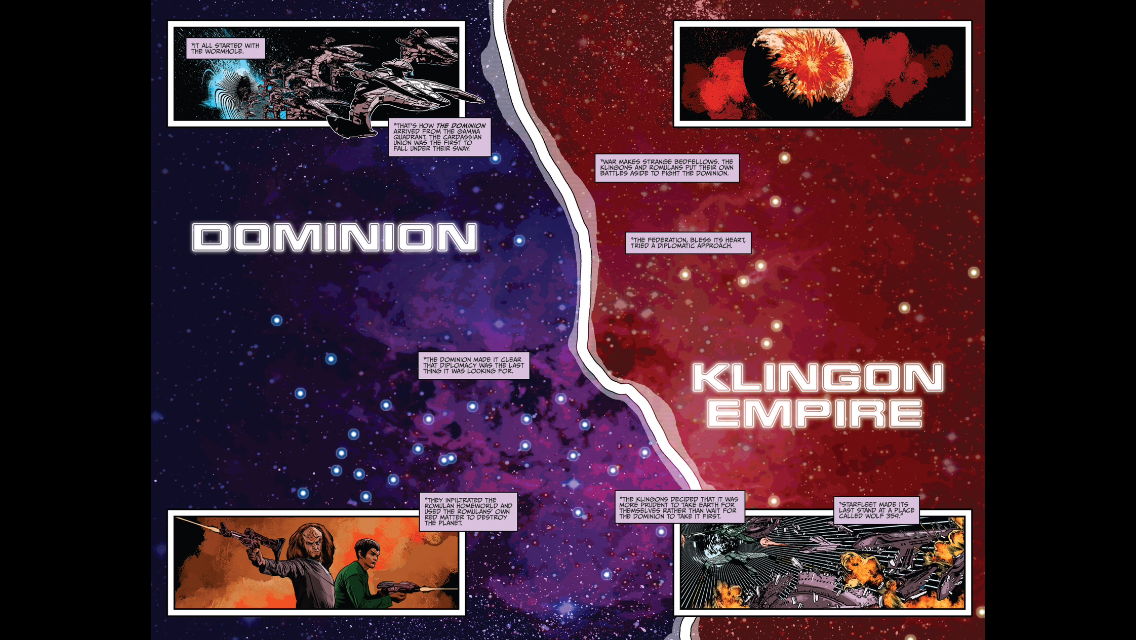