After two episodes that combined clever ideas with genuine laughs, the third episode of Red Dwarf XI gets the first criterion right but doesn't quite hit the second. There are some great elements here, and once again, Naylor's script revolves around some brilliant concepts, but fundamentally, "Give and Take" just isn't especially funny. 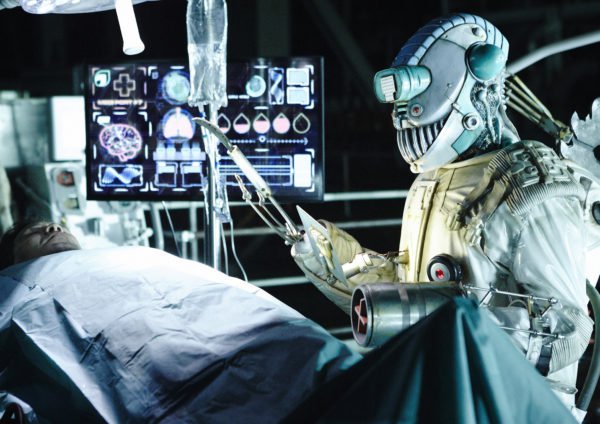 There are a few good laughs, the best of which being the drive room scene, which includes the dialogue around Kryten wiping Rimmer from his memory bank. This is one of the clips that was shared before the series started, and it is a belter. After that though, there's not many good laughs to be had. It's a fairly average episode on that score. Where it does rate above other episodes, surprisingly, is horror. The deranged surgeon droid Aschlepius is creepy as hell, and the sequence where he menaces Lister and the Cat works very well. It's not long before the episode moves back to the comedy. The Cat's selfishness has returned to its spectacular Series I levels, and this leads to some memorable exchanges. Snacky the snack droid is pretty poor though, and we've got enough talking snack dispensers on Red Dwarf. It's not a bad episode, all told, just an average one.

Once again, there's a link back to a previous episode, although rather subtler this time. We've already seen a stasis booth allow travel back in time, way back in Series II's "Stasis Leak," so the dodgy engineering on display here to turn such a booth into (yet another) time machine fits in with the dubious science of Red Dwarf. The time loop involving Lister's kidneys is cleverly done, although it lacks any real peril, because we know that the plan has already worked. There's also a huge logical conundrum: whose kidneys were in the dish in the first place? Lister's kidneys were only missing because the Dwarfers went back in time and removed them in the first place. It's a classic time loop, but doesn't explain the kidneys that get accidentally blasted. Perhaps Aschlepius detected that Lister was missing his organs and got some out of storage to transplant?
Good Psycho Guide: Three chainsaws

Best Line: "Oh, there's a folder in here called "Captain Bollocks!" Could that be you?
Posted by Daniel Tessier at 21:53