"Krysis" sees Red Dwarf XI hit a high with the best episode of the year so far. It has a gloriously simple and effective central idea, that of Kryten hitting his midlife crisis, and runs with it to a bizarre and poignant conclusion. The script moves from a brief but classic bunkroom scene into the main plot rapidly, with plenty of funny moments for each of the Dwarfers but always focusing on Kryten. Series X allowed the characters' age to show, with this series (and the next, from what I've seen) following that train of thought. Lister seems fairly comfortable with himself, the Cat is supremely self-assured (who can blame him in that glorious pink suit?) and while Rimmer might seem the obvious choice for a middy, he's so neurotic permanently it would make little difference. 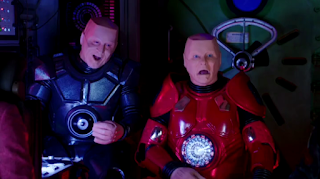 So it's Kryten who gets to face the crisis, and I guess that makes sense, as he's the one who's actually had to experience millennia of solitude, hard work and existential dread. We might consider this the latest step in his evolution from servile android to, well, gobbier, angrier servile android. His new red sportscar look and impromptu dance-off skirt the line between funny and naff, but that's the point with a midlife crisis. It should look embarrassing.

Pitting Kryten against his more accomplished predecessor gives this storyline legs. Dominic Coleman is perfect as Butler, the effete and genius mechanoid. His delivery has a touch of de Niro's Captain Shakespeare (from Stardust) to my ears, and arrogant as the character is he's likeable and seems to be taking real joy in everything he does. I'd be happy to see him again in a later episode, especially as he brings out the very worst in Kryten. The old Series 4000 really is part of the Red Dwarf crew: a somehwat deranged old bastard, like the rest of them.

The final act takes an unusual turn for the series, delving into a more philosophical area before turning it into a very funny scene with more than a hint of Hitchhikers to it. Conversing with the universe itself is not something I expected the series to give us, and it sets Kryten on a rather heartwarming resolution. It all adds up to a rather wonderful episode.

Continuity bollocks: Kryten here gives his age as 2,976,000 years old. Given that he was created in 2340, this places the current series in AD 2,978,340, with possible allowances made for time dilation, the most accurate date we've ever had for the setting. Clearly, Holly was rounding up a bit when he said he kept Lister in stasis for three million years.

Pretty astonishingly, mechanoids can be expected to last for six million years. Butler is described as Series 3000 mechanoid, which is something of a continuity howler. In the sixth series episode "Out of Time," we learned that the Series 3000 droids looked like realistic humans, but were recalled. Perhaps some of them were fit with new, Series 4000 styled skins? Less problematically, the Nova 5, Kryten's ship, turns out to be the name of a series of ships, with the Nova 3 originating a century before.

We also meet a new breed of GELF, the Sakinyako, who aren't dissimilar to the Kinatawowi.

Best Line:
"I've got an ingrowing toenail, it's killing me!"
"Thank it for me."