THE ADVENTURES OF SUPERGIRL

THE LAST CHILDREN OF KRYPTON

Supergirl kicks off its second season with a much-needed acceptance. The first run pussyfooted around the absence of Superman in a distracting fashion that just drew attention to the fact the Man of Steel was always hiding offscreen. Finally, he swoops in to help Kara face some celebrated Super-foes. So we get a new Superman, a new Lena Luthor and a new Metallo... and it really works. The dialogue is as corny and laboured as ever, but it's delivered with such well-meaning earnestness it's still impossible to not love this nonsense.

There's a lot going on in these episodes, with the decks being given a good shuffle for the new season. Cat Grant is signing off, and while it's all very beautifully played, the series really isn't going to be the same without Callista Flockheart's impeccable queen. Instead, we now have Kara working as a mild-mannered reporter, a development I'm not keen on. Must she be exactly like Clark Kent? Predictably, her boss is tough and impossible to please, but seemingly without any of the charisma or redeeming qualities her previous boss had... so he's just an arsehole. Meanwhile, the writers take a huge backtrack on Kara's relationship with James, presumably because they've realised he's actually quite dull.

In a series that has so far struggled to produce effective male characters (not that this isn't a refreshing reversal), Tyler Hoechlin is fine casting as Superman. While he doesn't have the cinematic charisma of Henry Cavill, he brings some of the purer character of Christopher Reeve or Brandon Routh. His joyful team-up with Kara is infectiously fun, even if they do start to become a bit nauseating, and the show's creators wisely allow Supergirl to retain top billing. Equally wisely, the Kara/Clark relationship is used to examine the Kara/Alex sister relationship. It works far better than a mere star cameo.

Superman's presence also brings out the best in characters such as Winslow and J'onn J'onnz. The Manhunter is initially at odds with Superman for his use of kryptonite, and while he eventually comes round to his way of thinking, I'm completely with J'onnz on this one. The Earth was just invaded by an army of Kryptonians - of course they need to keep some kryptonite on standby! On the villain side of things, I'm sure we can expect the lovely Katie McGrath to return to show a more sinister side to Lana Luthor, but it's only in the second episode that we get some genuine threat. Metallo is the immediate problem, but now Cadmus have revealed themselves to the world there's a new sense of danger to the core cast. However, I was quite convinced that the mysterious alien survivor who so violently awakes at the episode's end was to be Cadmus's planted Superboy clone, something I've since learned is completely wrong. Still, we'll meet him properly in the next episode.

Metallo is a perfect example of the DC school of villain names. He's made of metal, do you see? Fiendishly clever. There were a few Metallos before the classic cyborg version debuted in the late fifties. Both John Corben and his brother Roger existed as Metallo at different points, each of them saved after a terrible incident left them at death's door. Their bodies replaced by mechanical exoskeletons and powered by a heart of kryptonite, both versions of Metallo became recurring nemeses for Superman. As well as the usual super-strength and near-invulnerability you'd expect from a cyborg, Metallo's kryptonite core emits radiation harmful to Kryptonians. In some versions, such as Supergirl's, he can fire beams of kryptonite energy from his heart. Later versions have been upgraded by such villains as Brainiac and Neron to have new abilities, such as a T-1000-esque metamorphic power, or the ability to absorb other mechanical items into his being. Some versions became absolutely gigantic. 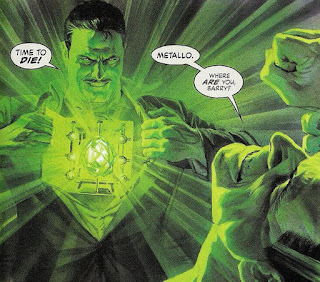 The New 52 imprint rebooted Metallo as the John Corben in the supersuit "Metal-0," and linked his origins to the experiments of John Henry Irons, aka the superhero Steel. The John Corben Metallo has been a foe in several TV series featuring Superman, including Superboy, Lois and Clark and Smallville. Supergirl is unusual in forcibly creating a second Metallo so that both Superman and Supergirl can be battled in their own base cities.
Posted by Daniel Tessier at 23:05