WHO REVIEW: 2016 Xmas Special - The Return of Doctor Mysterio

It's been a desolate year for Doctor Who fans. A whole 365 days to wait between episodes, the longest gap we've had since the series was revived back in 2005. All we've had to fill the void in the meantime was the disappointing spin-off Class and the animated release of the fan favourite The Power of the Daleks. (At least, that's the case onscreen. Doctor Who has been exceptionally well-presented in other media this year, with six incarnations heading their own Titan comicbook series and a whopping eleven in Big Finish audios.) Still, we do have the now-traditional Christmas special, now such a mainstay that its absence from the BBC schedules is unthinkable.

The Return of Doctor Mysterio (named for the series' Mexican title, a name Peter Capaldi reportedly adores) is a straightforward adventure, light of complexity and high on fun. It doesn't feel particularly “special,” although its status as the only episode of the year gives it a little more clout. It isn't even especially Christmassy, with the festive trappings limited to the opening scenes. Still, after the exceedingly festive Last Christmas in 2014, a couple of years of less snow-covered adventures is no bad thing. It's an episode with nothing more sophisticated to say than “look, it's Doctor Who does superheroes!” and that's fine. I don't understand the view of some fans who attack this idea. Yes, it's derivative, but Doctor Who has often been at its best when it was copying other things. Do fans complain about The Brain of Morbius being “just Doctor Who does Frankenstein” or The Enemy of the World being “just Doctor Who does Bond?”

Specifically, this is Stephen Moffat's love letter to the Richard Donner/Christopher Reeve Superman films, although there are nods to other properties. Moffat has spoken at length about how Clark Kent is his favourite superhero, specifically the man behind the Superman, and it's easy to see why. Lois and Clark is a timeless story that asks us to accept a ludicrous premise – that a woman can't recognise a man in two different guises – in order to play a farcical love story. It's exactly the sort of thing that's up Moffat's alley, and Doctor Mysterio plays out pretty much as you'd expect it to. It's perhaps an oversight, though, to more or less ignore the modern superhero movie genre, something that is ripe for its own parody. Nonetheless, it makes sense for a Christmas Day treat; Superman – The Movie is exactly the sort of feelgood family film people sit down to watch together on the day. 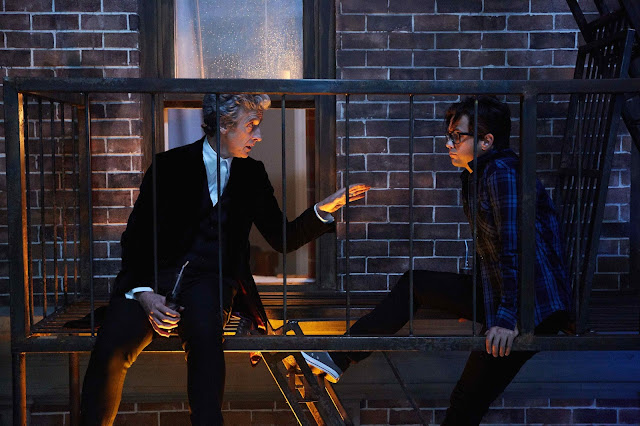 As always, success hangs on the writing and the cast, which come together to produce a very enjoyable hour. As is traditional, the American characters are not played by American actors; Justin Chatwin is Canadian and Charity Wakefield is from very near my bit of England. They both inhabit their roles perfectly. Chatwin plays Grant as a kind, witty if unconfident gent, very Clark Kent indeed, although his mannerisms (and costume) as the Ghost are more Batmanesque, all steely earnestness and deadpan delivery. His power set is, however, 100% Superman, and this remains the main basis for the character. Wakefield embodies her pseudo-Lois Lane just as well, someone so focussed on certain aspects of her life that it's jut about believable she can miss something “too stupid to be allowed to continue.” Of course, a nanny is just about the worst possible job for a part-time superhero to take on, but that's all part of the conceit, and Moffat's script enjoys poking fun at these small absurdities.

The casting of Grant's younger selves is absolutely spot on, with Logan Hoffman and Daniel Lorente working perfectly as the boy and teen versions respectively. They share some excellent chemistry with Capaldi, who is finally being allowed to use his natural flair for kids in his performance as the Doctor. The high school scene is a particularly lovely little scene, but it's kid Grant who'll stick in my memory most. With that much comicbook art on his walls and a very snazzy set of dinosaur jammies, he's the coolest kid ever to appear on Doctor Who.

It's a very nice touch correlating the absence of Doctor Who with the Doctor's twenty-four year time-out with River. The real surprise here is how well Nardole works. As I've said before, I like Matt Lucas, but he was wasted in The Husbands of River Song with a stupid, one-note comedy character that wasn't very funny. This is isn't quite the revamp that Donna Noble got, but the refined new Nardole actually works very well as a companion. The comedy moments work better, and Lucas adds a real pathos to the serious moments. Nardole acts rather like a low-key agent in this episode, who keeps the Doctor focussed and points out his errors. I'm not convinced he can work well throughout a whole season, but we'll see how it runs.

There's a nice about-face regarding the villains of the episode. Adetomiwa Edun (another Brit) plays Mr Brock, blatantly set up to be the grand, Lex Luthor-esque villain, before the alien/German (delete as applicable) Dr Sim (Aleksander Jovanovic) pulls his brain out. It was a surprise to see the head-splitting aliens from last year's special return, but it was written right there, in the name Harmony Shoal. This is, of course, about three thousand years before the previous episode, making it even more of an expected and skewed two-parter. Also, I had hoped the brain aliens would be the Morpho brains from The Keys of Marinus, but that's ridiculously obscure. That'd be like bringing the Movellans back, or something.

Continuity Corner: The Shoal's plan, to fake an alien invasion to cover up their own operation, is almost exactly the same as the Slitheen's in Aliens of London, right down to replacing political figures by putting zips in their heads. Yet some people think it's a Watchmen reference.

The Doctor states that, after many attempts to conquer the Earth, none has ever succeeded. Clearly he's forgetting the first such example in the series, The Dalek Invasion of Earth, which ran smoothly for ten years before he turned up.

The Doctor's device to reduce time distortion in New York would seem to be his attempt to clean up after the events of The Angels Take Manhattan. Being alone post-Clara, he's probably feeling lonely and is thinking of Amy and Rory again. The opening scene with young Grant seems to take place before The Husbands of River Song.

“With great power comes great responsibility,” is, of course, a direct lift from Spider-Man. “Go get 'em,” just needs a “tiger” to match up.


“I prefer mild-mannered.”
Posted by Daniel Tessier at 20:07