You could be forgiven for expecting something rather special from this, Kevin Smith's first episode of Supergirl. After all, his directorial debut on The Flash, season two's "The Runaway Dinosaur," was a thing of beauty. What's more, as the title hints, "Supergirl Lives" is loosely based on Smith's script for the troubled and long-dead feature film Superman Lives, although, from what I've read of that production, the only thing that has really survived is Kara being left powerless due to the lack of a yellow sun.

What we actually get is a fairly low-key start to the semi-season, even as it spans light years. Much of the episode takes place on Slaver's Moon, a hellish planetoid bathed under the light of a red dwarf star, leaving both Kara and Mon-El little better than ordinary humans. (As inhabitants of the same system, it makes sense that they react the same way to stellar conditions. For all we know, Slaver's Moon might even be in the Kryptonian system, although it's probably unlikely.) Much of the purpose of the episode seems to be tying up the loose ends from the previous episode "Survivors," with the villainous Roulette still on the loose. The alliance of Roulette and the Dominators, while tying various elements of the Supergirl/Arrowverse together, feels like an odd mix and doesn't really work.

Where the episode succeeds is in the development of two of its recurring male characters. Jeremy Jordan has really come into his own as Winn, now that the character has been allowed to get away from the confines of CatCo and become more than a second-tier love interest for Kara. Winn's latest role as sidekick to the Guardian is more believable than James becoming the superhero himself, but as a distinctly un-buff, un-powered individual, it's entirely fitting that Winn would be overwhelmed by the threat and violence of the situations in which he finds himself. Jordan portrays Winn's journey from post-traumatic stress through reluctant heroism to true bravery rather wonderfully.

Chris Wood gets more likeable as Mon-El with each episode, and this instalment sees him finally accept his fate as a superhero without losing any of his layabout charm. As well as finally kicking his story into high gear (with more developments in his relationship with Kara to come as a result), the aliens searching for him at the episode's close raise interesting questions about his background. Do we know the truth about his life back on Daxam? There should be some fun revelations to come later in the season.

The real star of the episode, though, is the stupid comedy alien called Joe, who appears to have wandered in from a children's series filming on the same planetoid. 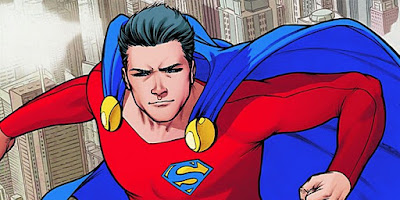 HALK KAR TO LAR GAND TO MON-EL TO VALOR

Mon-El, like many DC characters, has a long and storied history that has been reworked and rewritten many times over the years. The basic idea of the character, a sort of pseudo-brother to Superman, was initially used in 1953's Superman #80, with the story "Superman's Big Brother." In this, an amnesiac alien crashlands on Earth and is found by Superman. Since he has material from his father, Jor-El on his person, Superman jumps to the conclusion that this alien is his elder brother. It turns out that this superpowered gent is Halk Kar, an alien from the planet Thoron, and not a Kryptonian after all.

DC recycled this idea eight years later, in Superboy #89. The Superboy title explored Clark's pre-Superman heroic adventures, and the story ran along very similar lines as the above, except that the alien was named Lar Gand and was from the planet Daxam. Again assuming him to be a long-lost Kryptonian brother, Clark named the alien Mon-El, because he landed on a Monday. As well as introducing the Daxamites, this story gave us the information that they are fatally allergic to lead, but unaffected by Kryptonite.

Mon-El gets dumped in the Phantom Zone to arrest his lead poisoning, but later escapes and becomes part of the futuristic Legion of Superheroes. In the massive continuity reshuffle of Crisis on Infinite Earths, Superboy was retconned out of existence and Lar Gand was rewritten as the hero Valor, taking some of Superboy's place in the DC bakcstory, The 90s version of the character was M'Onel, after the Zero Hour reboot which created a new version of Superboy with a whole new backstory. Further retconning during the Infinite Crisis brought back some of the earlier elements of the character and made him Mon-El again. This version joins the Legion of Superheroes himself before finally becoming a Green Lantern. The latest version, of The New 52, seems to be a hotchpotch of different continuity elements.

All this means that only the fundamentals of the character have been brought over to Supergirl and Chris Wood's role. We don;t know the truth of his mysterious past just yet, although I'd lay a fiver on his real name being revealed as Lar Gand.
Posted by Daniel Tessier at 19:40