TOS 2-23) Patterns of Force
or
Captain Kirk vs. Space Nazis

Alien life forms: The Ekosians and Zeons  are two humanoid races who inhabit the planets Ekos and Zeon respectively. They seem to be indistinguishable from humans, and from each other. The Zeons are technologically more advanced than the Ekosians, and a number of them arrived on Ekos some years ago in an attempt to "civilise" them. The Ekosians did not welcome the Zeons, and treat them as second-class citizens. Since Gill came to power, the Ekosians have been run as a Nazi state, unaware that Gill is from another world. The Zeons are being rounded up and exterminated, but there is a resistance movement.

Future History: John Gill is considered one of the Federation's greatest historians. Sent to Ekos merely to observe the culture, he has perverted it into a replica of Nazi Germany, right down to the uniforms and weaponry. While Gill sits as Fuhrer, it;s his right-hand man Melakon who wields power, keeping Gill drugged and subdued and communicating his wishes through soundbites. "Gill" has now ordered the "Final Decision," an attack on the planet Zeon and the complete extermination of the Zeon race. Just in case any of this was too subtle, the Zeons all have Hebrew-derived names, like Isak and Abrom.

Future Treknology: The Zeons have quite primitive interplanetary craft. Gill (and perhaps the Zeons, to begin with) has evidently pushed Ekosian technology forward, as they now have nuclear weaponry and the beginnings of space travel themselves.

Kirk and Spock have transponders injected into their skin to allow them to be beamed up should they not report in. An extremely wise precaution that they really should have used as standard. However, they dig out the implants to use the rubidium crystals within to create a laser beam from the lightbulb in their cell in order to affect escape.

Captain James T: Gill tutored him at the Academy. He evidently admires the man, describing him as "gentle," but even Kirk isn't immune to the allure of a well-tailored Gestapo uniform. For once, Kirk doesn't try to shag the sexy blonde he's assigned to work with. He could easily get the Enterprise to intercept the Ekosian warfleet but refuses to go down such a destructive route.

Green-Blooded Hobgoblin: How perfect does Spock look in his beanie? Spock's alien appearance draws attention from the xenophobic Ekosian authorities, even with his cunning beanie disguise. (The fact that Nimoy is Jewish makes these scenes rather more potent than they might otherwise be.) When Spock stands on Kirk to begin his escape attempt, it looks for all the world like he is taking as long as possible on purpose. He also starts to enjoy "gambling" with his life. Spock's lash-marks are, of course, green. He uses the nerve pinch no fewer than three times, and "mind probes" Gill.

The Real McCoy: The entire set-up is worth for when Bones beams down in SS uniform, demanding to know what the hell is going on. Shirtless Kirk Alert: It's a twofer, as both Kirk and Spock get their tops off. And whipped. This is bordering on slash fic.

Trek Stars: Valora Norland plays Daras, femme fatale who poses as a high-ranking Nazi but is secretly part of the resistance. She gives an excellent performance and isn't reduced to Kirk's fox of the week.

Space Bilge: Kirk and Spock consider the odds of a parallel society like this developing of its own accord virtually impossible. This is after previously visiting space Rome and a perfect duplicate of Earth.

Quote, Unquote: "To the logical mind, the outlook is somewhat gloomy."

The verdict: A good, old-fashioned "Nazis in America" tale, and about as subtle as they ever get. The script twists itself into a propaganda piece for the Prime Directive, when the actual lesson is the far from surprising "Nazism is bad." Still, it works well, with some excellent costumes brought out from the archives so it looks more expensive than it actually is. There's another side to this beneath the surface, with both Nimoy and Shatner being from Jewish backgrounds. With Nazi elements becoming more prevalent in the US and even dominant parts of society sliding towards that way of thinking, "Patterns of Force" takes on a new edge. Gill isn't as bad as Trump.


TOS 2-24) By Any Other Name
or
Captain Kirk vs. the Galaxy Beings

The Mission: Answer a distress call from an uncharted planet.

Planets visited: An inviting class-M planet with red foliage and a purple sky. The aliens crashed on the planet upon entering our galaxy, so it must be very close to the galactic edge (it's an hour away at warp 11). There's a large moon or sister planet in the sky, at least in the remastered version. It becomes their new homeworld at the end of the adventure.

Alien life forms: The Kelvans - alien beings from the planet Kelva in the Andromeda Galaxy. In ten thousand years, their home galaxy will be rendered uninhabitable due to rising radiation. Despite professing to be beings of pure logic, they also live to conquer and expect subservience from other species. Rojan, their leader, describes them as "creatures of outer space," unused to open environments on planets, but this may be due to their 300-year-long generational voyage rather than a clue to the Kelvans' normal lifestyle. In their natural form they are immense beings with a hundred tentacles, each capable of undertaking a separate complex task. As Kirk points out, they'd have trouble using a turbolift, and in order to use the Enterprise to return to Andromeda they have taken on perfect human forms. However, they are overwhelmed by human sensation, each member of the team using a different experience to overcome them. 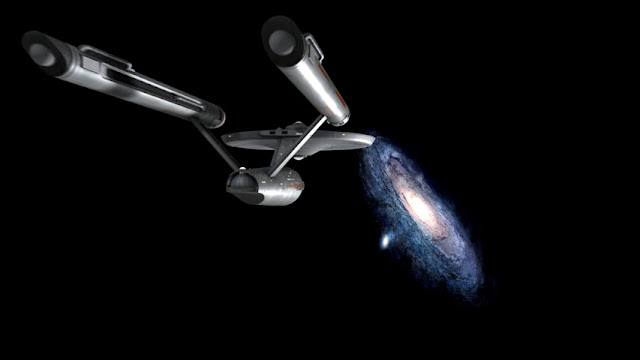 Captain James T: He immediately sympathises with the Kelvans' plight, and suggests that they could pick one of the many planets nearby to colonise. Even after overcoming the Kelvans and retaking the ship, Kirk still offers to talk to the UFP on their behalf. On the other hand, Kirk is exceptionally creepy in this episode, aggressively seducing the top female alien, Kelinda. He says he rarely hits a woman (rarely, not never) and proceeds to snog Kelinda into submission, leading to some of the most cringeworthy dialogue Star Trek has ever delivered.

Green-Blooded Hobgoblin: Uses a mind probe to try to trick Kelinda, but is overwhelmed by the bizarre alien images and unknown colours and mathematics of the Kelvan mind. Vulcans can put themselves into a deathlike trance, handy for selling the old "sick prisoner" trick.

The Real McCoy: The good doctor blags that Spock has "Rigellian casava fever," whatever that's supposed to be. He doses up one of the Kelvans with stimulants till he goes off on one against his commander.

Great Scott: The Kelvans eat food cubes, and while the weird multicoloured food on the Enterprise doesn't look much more appealing, Scotty decides the way to a Kelvan's heart is through his stomach. He proceeds to get one utterly fucked on Saurian brandy ("It's green,") and sundry other beverages. He manages to drink the alien under the table - just.

Phenomena: In a nice bit of continuity, the Kelvans' ship was damaged when crossing the energy barrier at the edge of the Galaxy, which previously caused trouble back in the pilot episode. Kirk gives a very offhand, "Yes, I know, we've been there," when presented with this information. He might as well yawn.  No form of transmission can penetrate the barrier, but no prepared, the Kelvans can adjust the Enterprise to survive the voyage through. Flooding the nacelles with positive energy would cause the ship to be destroyed by the negative energy of the barrier. Unlike the first trip through the barrier, there are no ESP effects on the crew.

Future Treknology: The journey to the Andromeda Galaxy (2.2 million light years, fact fans) would take thousands of years at maximum warp, but the Kelvan's engine modifications can reduce this to a mere three centuries.

The Kelvans utilise a little box on their belts to immobilise their victims. It emits a neural field that neutralises voluntary nerve impulses, freezing people in place. It is also capable of reducing a human being to its constituent elements, arranged in a neat polyhedral shape. Reversing the process seems to lead to no ill effects, but crushing such an object destroys the victim forever.

The verdict: Pretty classic Trek. If you can forgive Kirk's extreme loucheness, this is cracking aliens-learn-humanity stuff. The shots of the ship travelling through intergalactic space in the remaster are gorgeous. The stunt work is some of the sloppiest ever, though. Watching this, it's hard not to want to know more about the Kelvans. They should bring them back in their natural form. We have CGI now!