Perhaps my favourite thing about The Flash is there embracing of Gorilla Grodd, the best of DC's villainous gorillas. (That there're even multiple villainous gorillas to choose from is a wondrous thing.) In the season two episode "Gorilla Warfare," Team Flash unceremoniously dumped Grodd in the parallel universe of Earth-Two, hoping to wash their hands of him.

Naturally, that didn't go to plan. Earth-Two has an entire city of telepathic gorillas, and Grodd landed rights on their border. Unsurprisingly, a power struggle ensued, between Grodd and Solovar, the great white gorilla who rules Gorilla City. I am so happy that this nonsense makes it to TV in 2017. The first episode takes our heroes on a mission to the African jungles of Earth-Two in search of Harrison Wells, although central Africa does look a lot like a wood in Vancouver. (There's a nice moment lampshading this with some balls about arresting climate change on Earth-Two, but really, there's no way they could afford major location work after spending all their money CG gorillas.) This is tremendously fun, with lots of OTT pseudo-Roman gorilla battles.

The second episode continues Grodd's plan to take revenge on Central City, roping in Gypsy (underwhelming Jessica Camacho) to open rifts to Earth-One. As much as having gorillas running round the city is a sure-fire win, I enjoyed this episode less. It's too bound up with Barry's ongoing mistakes and guilt, and the most interesting part -having him decide to kill off Grodd for good - is dropped in favour of his taking the moral high ground. If you're going to make him flawed and make questionable decisions, go all the way with it. He can't even let Solovar kill Grodd, although naturally the showrunners want to bring the monstrous ape back again next year.

Beyond the gorilla shenanigans, this two-parter exists to bring Jesse Quick back onto the showin order to run her romance with Wally. Quite why she's so enamoured with the stroppy little bastard is anyone's guess, but Violett Beane is pretty adorable so it's no bad thing having her around. Plus, we get the return of proper Wells, Earth-Two version. It's great fun watching likeable, hipster HR rub up against short-tempered genius "Harry" Wells, but mostly I'm pleased to have sexy Wells back for a couple of episodes. (His channelling of Grodd in the prison scenes is weirdly hot, and I'm not the only one who thinks that.")

Other than the Wells family relations, the best character in this two-parter is Julian. Tom Felton is such a great addition to the recurring cast; he steals every scene that allows him a line. I'm finding the Savitar plotline rather dull, but Julian himself is a great character. I love seeing get his Indiana Jones on for his excursion to Earth-Two. Plus, after his continual mentions of the Philosopher's Stone in preceding episodes, we get perhaps the greatest in-joke yet. They must have pissed themselves writing the Planet of the Apes line. 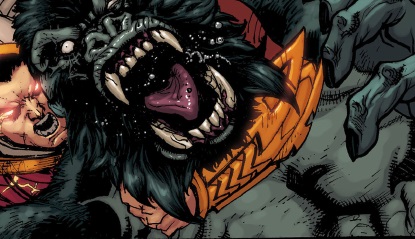 Gorilla Grodd goes right back to 1959, with his debut appearance being in The Flash #106. In the original continuity, Grodd and his fellow Gorilla Citizens were granted their super-intelligence by a radioactive meteorite, later retconned as a spaceship, which crashed into the African jungle. Solovar was part of the story from the beginning, having constructed Gorilla City with extraterrestrial help, and telepathically warning Barry Allen of Grodd's plans of world domination. Over the following years, Grodd made numerous appearances and enacted various schemes. He was frequently involved with other members of the Flash's Silver Age rogue's gallery, and such teams as the Injustice League and the Secret Society of Supervillains.

Grodd has made a major return in the New 52, as king of Gorilla City, having killed and devoured his father (in this version, the gorillas believe that eating the brains of their enemies embues them with their knowledge). It seems that these gorillas were enhanced by the Speed Force itself, further tying their destiny up with that of the Flash. Grodd has made a number of TV appearances over the years in various animated series, in particular as a recurring foe in the wonderful Batman: The Brave and the Bold, even joining forces with other simian villains such as Gorilla Boss and Monsieur Mallah. in the wonderfully fun episode "Gorillas in Our Midst" (which also features Detective Chimp). On TB&TB, Grodd is voiced by John "Bender" DiMaggio, while on The Flash he is voiced by David Sobolov.
Posted by Daniel Tessier at 22:08