Scream for Shalka - the REG Doctor returns in Nine Lives!

Waaaay back in 2003, when Doctor Who was celebrating its 40th anniversary, there was a very exciting announcement. Doctor Who was coming back, with a modern new direction, and a new, ninth Doctor! Before that though, there was another announcement. Doctor Who was coming back as an online cartoon serial, with a new, ninth Doctor played by Richard E. Grant. The excitement around the new TV series killed the thing dead, but Scream of the Shalka, that first, solitary web serial still has its fans.

One area the REG Doctor, or the Shalka Doctor, lived on is in fanfic. Now, after this very, very long break, there's been an upsurge in interest in that Doctor. Shalka was released on DVD last year, and Obverse Books have released a volume analysing the serial as part of their exhaustively researched Black Archive range. And now, we have the pleasure of announcing Nine Lives, a fiction anthology for charity, featuring the Richard E. Grant Doctor in stories written by such luminaries as Rachael Redhead, Kara Dennison, Stuart Douglas and Paul Driscoll, plus more... Scott Claringbold is the editor and there's wonderful cover art by Paul Hanley. Oh, and I have a story in there too: "Frozen Time," a chilly chapter in which the Doctor encounters an old, old enemy...

Pre-orders are closed as I write this, due to a heartwarming and surprising early run of orders, but the book will soon open up for orders again once printing is a go. It's on sale for £12 from Red Ted Books (plus postage, natch) and all proceeds go to the Stroke Association and the Multiple Sclerosis Society. 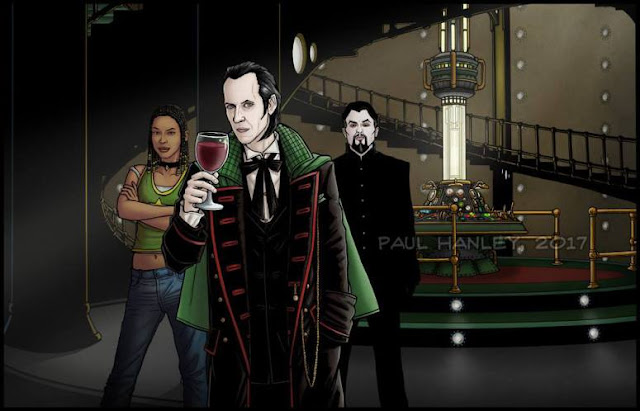 Email ThisBlogThis!Share to TwitterShare to FacebookShare to Pinterest
Labels: charity, Doctor Who, fanfic