It's hard, as a British person in the 21st century, to understand how many American states remained racially segregated until the latter half of the twentieth. That's not to say racism and illegal segregation don't exist today, or where I live, but the widespread and legally enforced separation of black and white populations has never existed here. The echoes of racial segregation can be seen throughout the United States today, and this is hardly surprising, considering that it was a simple matter of fact for so many people still alive today. While racial segregation is now illegal in the US, we can already see a modern form of segregation, against same-sex couples and transgender individuals, taking shape under the guise of "religious freedom laws." They're even trying to keep people from using public toilets again.

So Hidden Figures is a timely piece, both last year's bestseller by Margot Lee Shetterley and this new film adaptation. I confess to not having read the book (yet, it's now high on my too-read list), but the film was something I was eager to see as soon as I heard about it. Part of this was down to the excellent cast, but mostly it was a desire to see an underexplored side to the space race, a major part of 20th century history which has always held a fascination for me.

Hidden Figures centres around three African American women, working for NASA in 1961, on the eve of manned spaceflight. Katherine Goble (nee Coleman, later Johnson), played by Taraji P. Henson, was and is a remarkable woman who displayed one of the finest mathematical brains of the 20th century. (Katherine Johnson, now 98-years-old and described by all who meet her as "sharp as ever," received the Presidential Medal of Freedom two years ago and attended this year's tumultous Oscars with Henson.) Katherine is the central character of the film, but a great deal of focus is also given to her friends and colleagues, Mary Jackson and Dorothy Vaughan. Jackson, played by Janelle Monae, was one of the most notable engineers at NASA and a tireless advocate for equal workplace rights. Vaughan, played by Octavia Spencer, taught herself computer programming language and became a frontrunner in the field of computing. They were, respectively, the first black female engineer and supervisor at NASA. Of the three, I was previously aware of Vaughan and Goble/Johnson, but I hadn't heard of Mary Jackson until watching the film.

The cast are uniformly excellent. As well as the three leads, the cast includes Kevin Costner as the director of the Space Task Group, Kirsten Dunst as Vaughan's departmental supervisor, and Mahershala Ali as Jim Johnson, Katherine's suitor and then husband. Although given relatively little screentime, Ali is magnetic, and it's hardly a surprise to me that he was become the first Muslim actor to win an Oscar (for Moonlight, one of my must-sees for March). There's also a role for the now ubiquitous Jim Parsons's, as chief engineer Paul Stafford, who comes across as a straight version of his usual cerebral, socially inept characters. Glen Powell is suitably charismatic as the legendary astronaut John Glenn, albeit reduced in age somewhat for the film. 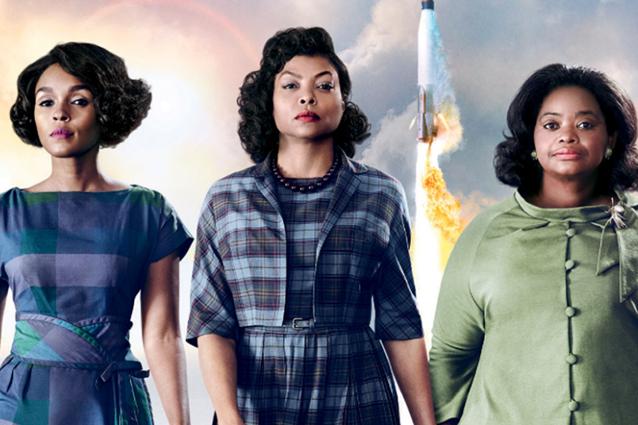 For all the support they have from the wider cast, though, the strength of the film lies with the leading actresses, in particular Taraji P. Henson. She grounds the film with a performance that paints Goble as both an exceptionally gifted woman and a very straightforward one, someone who is both down-to-earth and looking to the stars. Janelle Monae adds a sassier, sexier side as the highly intelligent engineer Jackson, displaying a refusal to ever submit to the unfair treatment of her state, while Octavia Spencer makes Vaughan the most fundamentally likeable of the trio, coming across as a quietly brilliant and highly compassionate woman. Both Jackson and Vaughan are portrayed as more ambitious than Goble, who is simply so remarkably intelligent that it is ludicrous that she shouldn't be included in the most important meetings of the Mercury programme, and proves herself indispensible.

This was a time when the word computer meant someone who sat and performed calculations with pencil and paper. In a time when we each carry a supercomputer in our pocket and there's serious talk about private leisure flights to the Moon, it's amazing to see the first men travel to space, and the very first, cutting-edge IBM systems installed at NASA (taking up a huge office space). But it's the attitudes that are the most alien. A big chunk of the film is taken up with Goble's treks across the NASA grounds to find a toilet she is allowed to use, a drawn out, repetitive sequence that hammers home both the tragedy and absurdity of the situation. Jackson has to petition to be allowed to attend an all-white college in order to gain the qualification necessary to apply to become an engineer. Black people live in fear of being stopped by a white policeman, unsure what will happen if they say the wrong thing... well. maybe some things haven't changed.

A film like this is bound to romanticise the facts somewhat. Even a little surface research shows that the screenwriters have altered the facts somewhat. The three women had already made significant strides in their careers by 1961, but aligning these events with the first manned spaceflights makes it all the more momentous. John Glenn really did insist that Goble check the calculations before he made his first orbital flight aboard Friendship 7, but it wasn't the breakneck, white knuckle rush that it's portrayed as here. Most notably, it was Mary Jackson who had to trek across campus to find a washroom, not Katherine Goble. She just used whichever lavatory she pleased. In reality, it seems that NASA, although far from perfect, was more equitable than is shown here. Nonetheless, the film works, because even if the facts don't quite align with what we see, it's making an important point. NASA may have been making strides forward, but America as a whole was lagging behind. The events play out against a background of civil rights protests and violent repurcussions. This was the society these women lived in.

While it tweaks events, the script doesn't play too loose with established facts. I was pleased to see that Alan Shepherd and Gus Grissom got their dues as the first and second Americans in space, before the glamour of Glenn's 1962 orbital mission. (Legendary as he is, there are those who erroneously think Glenn was the first man in space; he was the fifth.) It's a pity we couldn't hang on a little longer for the flight of Valentina Tereshkova, the first woman in space, but that would stretch the narrative out to mid-1963. While dominated at points by these world-changing events, this is a very human story, and as much is made of Goble's personal life and her romance with Jim Johnson as the mathematics, space flights and social upheaval. Genuinely excellent, this is a must-see.


As an aside, Lego have announced they are to release a "Women of NASA" set, which includes Katherine Johnson; Sally Ride, the first American woman in space in 1983; Mae Jemison (the first African American woman in space in 1992, and someone whose life I'd love to see made into a film; Margaret Hamilton, software engineer and one of the greatest computer scientists of the 20th century; and Nancy Grace Roman, the astronomer who helped create the Hubble Space Telescope.