It takes a certain cheek to call an episode “The Pilot” at the beginning of a programme's tenth, or even thirty-sixth, season. It's a statement of intent: Steven Moffat has called the episode a reboot, and while this is overstating it, there's a clear design to make this a new starting point for the series. To an extent, this works. We've got a new companion, who acts as the viewpoint figure the series has been missing for some time, through whose eyes we discover the elements of the programme. The kids who started watching Christopher Eccleston and David Tennant are grown-up now, and a new generation of children are starting to tune in. Doctor Who has a sort of soft-reboot built into its concept, with a continually changing roster of companions and Doctors, and the occasional slate-clean is good for its continuation.

On the other hand, this is the last season for both Capaldi and Moffat. The decision to make this a new starting point seems willfully perverse with Chris Chibnall taking over as showrunner, and a new Doctor joining at the same time. While there are callbacks a-plenty in this episode, it works reasonably well as something standalone. On the other hand, during the upcoming series, we have Ice Warriors, retro-Cybermen and two versions of the Master to look forward to. All wonderful fun, but hardly a fresh start.

There were several attempts to bring back Doctor Who in the long gap between the TV movie and “Rose,” and more than one of them had the Doctor grounded, living and working as a professor in some dusty old college. (Usually, they were proposed with an eye to having an older Tom Baker return to the role, and Moffat's already done that.) It's a perfect set-up for an introduction to the character, putting him in a position of authority but also making him interesting, a little distant, and with plenty of opportunities to impress. It's a nice touch making Bill, not a student who's impressed him with her intellect, but another outsider who's impressed him with her enthusiasm (and also recognising that not everyone can afford to go to university).

I wasn't keen on Bill based on her brief appearances in trailers and so on. She just came across as gobby and a bit dense. It goes to show how poorly done those trailers were. Pearl Mackie is extremely likeable as Bill, and by the episode's end I was thoroughly sold on her. Bill is, admittedly, a bit of a re-run of Rose (with a touch of eighties Ace thrown in), but she's different enough to make an impression herself. It's gratifiying to have a character who's genre savvy, not only pointing out the obvious sci-fi-ness of everything that's going on around her, but immediately rationalising everything as a clever effect. After all, a clever knock-through is a much more logical explanation than a dimensionally transcendental timeship. Also, although everyone has made way too big a deal of it, it's great to have a companion who's happily, uncomplicatedly gay. Plus having an actor of colour, playing someone in foster care... there are lots of different ways to live a life in Britain today. I didn't care much for Bill's jokes about models and fat women; those were low shots. 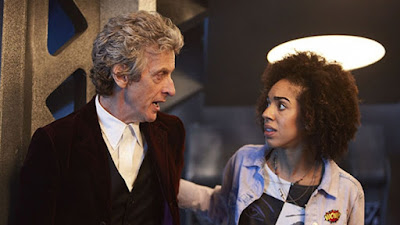 I'm also now completely sold on Nardole. He works perfectly as an assistant and valet to the Doctor. He exists as a sort-of cushion between the Doctor and the outside world, easing his interactions. It's looks like they've been good for one another, with the Doctor's hardened exterior softening and Nardole becoming more Doctorish (his explanation of the TARDIS' nature is cribbed almost exactly from the fourth Doctor's explanation in The Robots of Death).

The alien threat for the episode is a clever one, albeit highly derivative (we've seen living water in “The Waters of Mars,” a mimic in “Midnight” and a ship in need of someone with wanderlust to become its pilot in “The Lodger”). It's an arresting visual and a witty but easy-to-grasp concept, and leads to a clever, non-violent resolution. It drives me mad that both Bill and the Doctor take an age to realise what's wrong with the reflection. I understand that the script can only move as fast as the slowest member in the audience, but Bill's meant to be intelligent and the Doctor's a genius. It's infuriating. 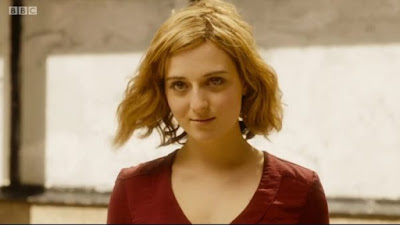 The problem with being sic-fi savvy, of course, is expecting storylines to go a certain way. I was convinced that Heather (a lovely performance from Stephanie Hyam) was going to be an alien of some kind, just as Bill was convinced that the star in her eye was evidence of an alien possession. In the event, she was an ordinary girl, until she fell victim to the sinister puddle (and why would you want to get a “defect” like that fixed? It looks amazing!) We were also forewarned that the Daleks were going to appear in this episode, so naturally I spent much of the episode wondering how they were involved with the whole thing. I assumed that the spacecraft that left the oil and scorch marks was of Dalek origin (the last time we saw a landing pattern like that was in Remembrance of the Daleks). As it happens, the Daleks were nothing but a brief sideshow, presumably only included so as to incorporate the little scene from over a year ago that introduced Bill. Quite why the Doctor thinks it's a good idea to hide out in the midst of a Dalek assault isn't clear, but it's a fun aside and drops that last essential element of the series into the episode.

“The Pilot” is the best opening episode for quite some time, probably since “The Eleventh Hour” way back in 2010, which remains one of the best episodes in the revived series. As much as I enjoyed much of the last season, the series needs a shot in the arm, and maybe a new companion was just what it's been waiting for. I am optimistic for the remainder of Capaldi and Moffat's last run. We shall see what is kept within the Vault, and why it's important enough to keep the Doctor grounded for fifty years, although I hope it doesn't override the individual episodes' stories.

Title Tattle: “The Pilot,” although clever, is the most generic possible title for an episode. There must be a thousand American series that have begun with an episode called “Pilot,” even when they're not actually pilot episodes. It is, however, a better name than the working title “A Star in her Eye.”

Links: The Daleks are seen battling the Movellans, a race of androids we saw in 1979's Destiny of the Daleks. By this stage, the two armies had become locked in stalemate due to their logical natures (it was suggested that the Daleks were, at this point in their history, entirely mechanical). It's a cute little aside for fans, and in no way intrusive for normal people. They just look like fun disco aliens. The Doctor states that they've gone into the past here, although that probably means from the perspective of their previous stop-off, 23 million years in the future.

Among the many little callbacks in the Doctor's study are photographs of two of the most important women in his life: his late wife River, and his (presumably late) granddaughter Susan. Capaldi has made no secret of his desire to see Susan return to the series, so perhaps this is foreshadowing of her eventual arrival later in the season.

The Doctor's moonlighting as a lecturer calls back to his old friend Professor Chronotis, a Time Lord from the previous generation who retired to live as a don at Cambridge. This was in Douglas Adams's notoriously unfinished serial Shada, many elements of which he reworked for his Dirk Gently books. He also pitched a story which would have seen the Doctor retire from adventuring and settle down on Earth, possibly as a tutor. (Adams also wrote Destiny of the Daleks. Any Hitchhikers references I didn't spot?)

The Doctor again tries to wipe his friend's memory, and again gets shouted down. It's good to see that Moffat clearly thinks that this is pretty unconscionable behaviour on his part. It calls back to the end of the previous season, where he intended to erase Clara's memory of him, only to get the tables turned. This was almost two years ago now and the missus had completely forgotten about it. This is the difference between people who watch things normally and people like me.

Best line: “No one's from space. I'm from a planet, like everyone else.”
I've been shouting this at sci-fi shows for years.