REVIEW: Guardians of the Galaxy Vol. 2

The first Guardians of the Galaxy film was an unexpectedly huge hit for Marvel in 2014, rocketing a fairly obscure comicbook team to A-list status and cementing Chris Pratt's position as a superstar. The sequel continues the story mere months after the end of the first installment. It's fair to say that Vol. 2 delivers more of the same: imaginative galactic locations, snarky characters, zippy one-liners and a retro-flavoured soundtrack. However, sometimes, more of the same is exactly what's wanted. If it ain't broke, as they say.

However, for me at least, Vol. 2 actually surpassed the original. While I can't say yet if it'll have the same rewatch value as the first film, it builds on the character relationships established in that movie to give the story a strong emotional centre. As Gamora says, the Guardians aren't friends, they're family, and that's what Vol. 2 is, at heart, about: family.

The big guest star of the film is Kurt Russell, an actor who's never anything less than utterly watchable in any film, playing Star-Lord's long lost father, Ego. Russell's now old enough to give a powerful performance as a noble, patriarchal figure, and while he's begun to appear in such roles, only Marvel and James Gunn would have signed him up to play a planet. For the most part he's a relatively modestly-appearing humanoid avatar, although he elevates himself to his true god-like status in the film's climax. It's no big surprise when Ego turns out to be the villain of the piece; it's signposted pretty clearly from his first appearance and all but Quill are unconvinced by his seeming benevolence. He's the first villain to really convince in the Marvel movies since Tom Hiddleston's Loki, with other films drafting in fine actors but giving them paper-thin roles to play. Russell's performance as Ego is a mix of terrifying power, amorality and regret, and it makes for a far stronger antagonist than Lee Pace's Ronan in the first film.

It's no stretch to imagine Chris Pratt's Peter Quill as his son, and Pratt gets a stronger role here than the dashing ne'er-do-well of the first film. There's some real depth to his lonely, outsider status, and it's easy to see why he is so eager to accept his place with Ego. His sudden turning on his father is the film's most powerful moment, with Pratt giving a fantastic performance. Of course, while Star-Lord is an outsider, so are his fellow Guardians, and it's this that makes them his true family. Outsiders all together. Dave Bautista gets most of the funniest lines as Drax, who is less literal, but even stranger and unpredictable than before. Bautista is clearly revelling in being a fan favourite, but he also gets his own strange relationship, with the adorable Pom Klementieff as Mantis. Essentially Ego's pet, she's a sad, rather beautiful character, both powerful and pitiful.

Zoe Saldana gets much better material to work with than in the first film, with Gamora holding a great deal of her own adventure in the depths of Ego's planet as she deals with her own family issues. Karen Gillan returns as Nebula, adopted sister to Gamora, and she gets to be far more than the faceless assassin of the first film. She's a deeper, more real character, and this makes her sexier and more dangerous than she ever was in the previous film. While she is set up as a villain early on, there's far more to her story here, as we learn the extent of Thanos's maltreatment of her and her relationship with Gamora is explored. The sisters enjoy some of the best development of the film's characters, and as it looks certain we'll see Nebula again, I look forward to seeing how their damaged relationship can be developed further. 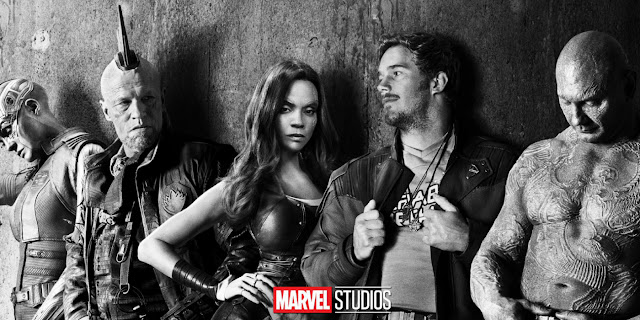 Rocket and Groot are present and incorrect, with the duo's friendship inverted from the first film. Groot is now Baby Groot, possibly the most marketable movie alien since the Ewoks and a highlight of every scene he's in. Groot was Rocket's muscle in the first Guardians, but now the tables are turned, with Rocket acting as Baby Groot's protector and teacher. Everyone looks after Groot at some point though; he's the team's little ward and needs constant supervision.

The real star of the film, though, is Michael Rooker. Returning as Yondu, Rooker gives an astonishingly sympathetic performance given that he's playing an interstellar mercenary and murderer. His story is violent but beautiful, as we follow his fall, rise and greatest moment throughout the film. At the heart of it, of course, is his relationship with Quill, again tying into the central themes of family and proving that Star-Lord didn't need to search the Galaxy for a father figure.

For all that, though, the basics are still here. The script is smuttily hilarious, the violence cartoonishly OTT, and the visual effects absolutely beyond compare. Really, aside from the odd moment that looks a little too cartoonish, I don't recall another space opera that looks quite this good. It's gorgeous, a riot of explosive colour. CG rendering has even reached the point where a creature like Rocket actually looks realistic. The soundtrack isn't as rocking as the first, although douze points for starting the film with "Mr. Blue Sky," one of my absolute favourite songs.

There's a huge amount to pick apart here, too, from secondary villains the Sovereignty and lesser but still massively entertaining roles from Sylvester Stallone and Sean Gunn, the latter who, as Kraglin, gets more screentime than expected and will also clearly be coming back for another trip round the Galaxy. (In a film about family, it's perhaps appropriate that one of the most likable performance comes from the director's brother. He also does Rocket's motion work on set, making him one of the unsung heroes of the production.)

Volume 3 is a way off yet, and before that, the Guardians will be appearing in Avengers: Infinity War, where they will, presumably, finally go face-to-face with Thanos. However, I doubt that film could top this one's cosmic ensemble. This is a film that, while dealing with a genuinely universe-toppling threat, still manages to be about the most personal of concerns. Ten out of frickin' ten.
Posted by Daniel Tessier at 16:56