Series ten, so far, represents a real return to form for Doctor Who. Not every episode is an instant classic, but we don't need twelve unmitigated wonder-episodes. Good, solid episodes of Who that may not be perfect but give us plenty to enjoy and talk about. "Knock Knock" is not, by any stretch of the imagination, an original piece of work, but it's supremely effective as a chilling, family-friendly horror story.

"Knock Knock" is, really, a very straightforward haunted house tale, with the twist being a sci-fi explanation for the "ghosts." This isn't remotely original in itself; Doctor Who did this back in 1989 with Ghost Light, and plenty of other productions and stories have taken a similar approach. It's sci-fi by the back way in; a fantasy episode through-and-through with some minor scientific trappings. In fact, I don't think we've had a less scientific episode of Doctor Who for quite some time. It wouldn't have played out much differently if the woodlice had been replaced with actual dryads.

There's a slight theme developing here, with the Doctor, for the second episode, admitting he's not sure if the strange-creature-of-the-week is terrestrial or alien, not much caring, and just getting on with taking care of the problem. It's fun to see him theorise about gaseous entities and dryads and whatnot and then happily leave without ever finding out what he was actually dealing with. Earlier Doctors would be driven mad by not knowing.

This is another fine episode for the Doctor and Bill's developing friendship. Every companion needs an episode that brings them back to Earth, giving them the opportunity to use their new time-traveller's nous in their own environment. This is Bill's, and it reinforces the generational gap between her and the Doctor. For the first time since Eccleston's tenure, the Doctor is being presented as explicitly of the older generation to the companion. Even Twelve and Clara didn't have this, being presented on a more equal footing due to Clara's ever-growing importance to the Doctor's life. The Doctor is positioned explicitly as a teacher to Bill, and while they're friends, he's exactly the wrong sort of person to be hanging around her new digs with her studenty friends. It's the first time he's been called "Grandad" and it's been more than just a throwaway joke. There's a reinforcement of the traditional Doctor/companion relationship, that of an old man and his long line of granddaughter substitutes, with the more recent romantic element removed from the equation by the actors' ages and the companion's sexuality. Whether this is building up to Susan's reintroduction as hoped, or just a return to first principles, it's a new dynamic for the fans of the modern series.

While Bill gets to run her own strand of the storyline and acts as a capable adventurer, none of her housemates are especially interesting. All likeable enough, and the cast all put in perfectly good performances, but none of them have enough time spent on them to be anything other than bug-bait. Only Harry (Colin Ryan) gets to do much, acting a short-term substitute companion to the Doctor and coming pretty well out of it (he just wants to get out of there, which, on the face of it, is a very sensible option). Otherwise, though, these kids are there just to get killed off, which they do very effectively, although they are also miraculously restored at the end, and while this is a fantasy story, I find it harder to believe that people can get better from being devoured by crustaceans or absorbed into wood. 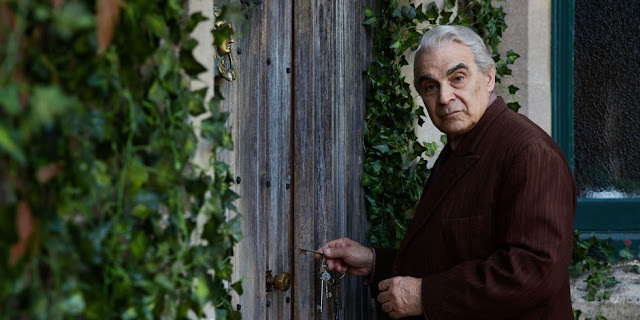 Any episode like this stands on its performances, and the stand-out one here is, of course, David Suchet. One of our most beloved actors, having him appear in an episode of Doctor Who is a huge treat for fans. As the Landlord, he runs the gamut from respectable yet mysterious, through to sinister and quietly threatening, to, eventually, childlike and pitiful. Also deserving of praise is Mariah Gale as Eliza, who manages to give a moving performance from beneath layers of prosthetics and CG animation. As for the twist about their relationship, I feel it works well, adding a stronger emotional element to the story than it otherwise had.

While there's not much of originality in the set-up, it's hard to fault a story about a man-eating house for its creep factor, especially when it's done as well as here. The effects and soundscape come together beautifully to create a very unsettling episode. If you have access to BBC iPlayer, I recommend watching the Doctor Who Enhanced version, which boasts 3D "binaural" sound. I'm not up on the technical aspects, but it does make for an immersive and disquieting experience. On the visual side of things, the creepy-crawlies are bound to give plenty of people the creeps, although their most effective moment, crawling into Shereen's foot, was cribbed directly from the 1999 version of The Mummy, which did it far better. Although, in fairness, that would hardly be acceptable for the family audience the series is going for.

The episode is also replete with foreshadowing. Bill learns in passing that the Doctor is a Time Lord, which might set up some more of his kind turning up later in the season, while his almost accidental mention of regeneration is clear preparation for Twelve's upcoming departure. Is the Doctor aware that regeneration is on the way, or is his saddened look at the mention a more general malaise? Then there's the biggest revelation about the contents of the Vault yet. I'm going to put my pound in and say it's Missy in there, but we'll find out soon enough.

Title Tattle: This is, to the best of my recollection, the only episode of Doctor Who that shares its name with an episode of The Real Ghostbusters.

At no point in this episode does anyone do the "Knock knock!" "Who's there?" "Doctor!" "Doctor Who?" joke. What a missed opportunity.

Links: The creeptastic house that provides the location for the episode is Fields House in Newport, which stood as Wester Drumlins back in 2007's classic episode "Blink." David Suchet also stayed there with his family one Christmas.

Harry is intended to be the grandson of Harry Sullivan, the fourth Doctor's companion in Doctor Who's from late 1974 through 1975. Played by the late Ian Marter, Harry accompanied the Doctor and Sarah Jane from Robot to Terror of the Zygons, with a return appearance in The Android Invasion. Writer Mike Bartlett intended that Dr. Sullivan be young Harry's other grandfather, not the one who nicks bits of the Great Wall with his boyfriend, but the lines concerning it were eventually cut.

The Doctor refers to the Time Lords as his species, which is arguable. Although the terms are often used interchangeably, it's usually agreed by fans that his species is Gallifreyan, with the Time Lords being the higher caste of the society. We also know from "Listen" that admittance to the Time Lords isn't a given. However, the various extra biological add-ons for the Time Lords might mean they essentially qualify as a different species to common-or-garden Gallfireyans.

Best line: Nardole: "You don't have to go to outer space to find monsters. There's plenty of things that want to kill you right here on Earth."
Posted by Daniel Tessier at 11:45