This review contains big SPOILERS! Click below the break to read. 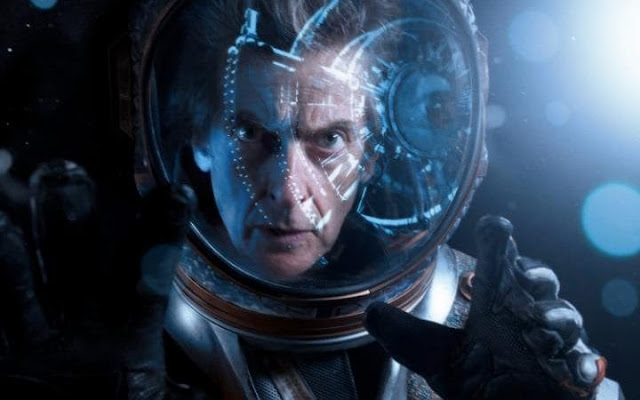 Well, that was a blinding episode, wasn't it?


Actually, it seems a little unfair to the Jamie Matheson's strengths that this episode is going to be remembered almost solely for the shocking cliffhanger ending. At time of writing, we don't know if the Doctor's blindness is going to last for one episode or the rest of the season, but I have a feeling it'll be the latter. I suspect we are seeing the beginnings of his regeneration - a slow accumulation of damage that eventually necessitates a transformation. In fact, given how much of a disability blindness will be for the Doctor, and how he is trying to keep it secret, we have to wonder why he doesn't trigger a regeneration already. Does the Doctor not consider blindness to be that incapacitating? Or is there something about his next regeneration that means he doesn't want to face it?

There's so much more to the episode than the shock ending, though. Matheson has stated that he wanted to present a more realistic portrayal of the dangers of space, and it's hugely satisfying to see exposure to space treated in such a feasible way. Although I wasn't expecting the Doctor to be permanently blinded, I fully anticipated his suffering from blindness following his prolonged exposure to the vaccum. He might have a respiratory bypass system, but he can't withstand the effects of zero pressure without ill effect, and eye damage is one of the most significant. Huge props to the writer for pointing out the danger of holding your breath, the very last thing you should do if you're about to be exposed to a vacuum. A particularly fit and healthy human being can be expected to maybe survive two minutes of vacuum exposure, not without significant damage, but only if they breathe out first!

From the outset, this presented a more real take on space travel. The cold open, introducing two believable characters only to kill them off, made a story point of the silence of space. From there on, the ever-present danger of exposure to space is the main threat faced by the characters. Indeed, this is an unusual episode with no villains per se. The automated spacesuits present a threat, becoming monsters when they're carting around the corpses of their “biological components” as they stalk the corridors of the space station. They can't be considered villains though, they're not sophisticated enough. They're just tools of a faceless corporation, who would be the villains of the piece if they ever made any kind of appearance. The closest we get to an antagonist character is Velma, and she's an automated voice.

It's another episode that works on the strength of its central cast, with Capaldi and Mackie still displaying fine chemistry while at the same time finding new things to do with their characters. Just as Bill is beginning to get a little comfortable with the space/time adventuring, she is exposed to seemingly certain death, left completely helpless by the suit that controls her movements. Mackie is exceptional in this episode, portraying utter desperation, fear and then resignation as she confronts her fate. Her performance, and the material, are bringing out the best in Capaldi's performance as well. The Doctor is becoming, not exactly overconfident, but ever more rash and desperate in his actions. He takes a huge gamble with Bill's life, and she only survives because he's lucky enough to have guessed the suit's power level correctly. Given how often he's wrong, it's a terrible game to play with her life. But he also risks his own life and faculties to save her, and pays a huge price.

Matt Lucas also gets his best episode, showing new and unexpected sides to Nardole. It could be said that his character has been portrayed inconsistently, but we have seen so little of him that he's basically a clean slate. The guest cast all do well with their roles, but they are all incidental characters and there isn't that much to them. I really dislike Mimi Ndiweni's character, Abby, who seems to be exist just so that there's someone to be aggressively obstructive to the Doctor.

“Oxygen” is a strong episode that combines genuine science fiction concepts with an unsettling horror vibe, and even if some of the walking corpses do look a bit “Muppet-y,” there's some truly horrible design on display here. After the anti-right wing message of “Thin Ice” we have a none-too-subtle but absolutely biting anti-capitalist story. This is turning out to be the most socialist season of Doctor Who in years.


“Am I? That explains the bruised shins.”

“We're fighting the suits.”
Posted by Daniel Tessier at 19:51