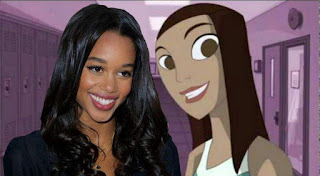 Liz would appear to be the MCU's version of both Liz Allen, one of Peter Parker's many romantic interests in the comics, and Valeria Toomes, daughter of the Vulture. Liz was the primary live interest of Parker in the Spectacular Spider-Man's first TV season., where she was portrayed as mixed race rather than the comics' traditional apple pie American blonde. In the Ultimate Spider-Man comics, Liz becomes Firestar, the superhero who was part of Spider-Man and His Amazing Friends. Sony was previously planning a spin-off movie featuring a team of female superheroes, and while it looks like this has been cancelled, if it ever gets the go-ahead again, Firestar would be a likely inclusion. Liz also has links to Flash, Ned and Harry Osborn in the comics, and is the stepbrother of the villain Molten Man, although she doesn't appear to have any siblings in this version. Valeria Toomes tries to distance herself from her father's activities in the comics, and eventually works for SHIELD. Again, it's easy to see this becoming part of the narrative if the character returns to the MCU in the future. 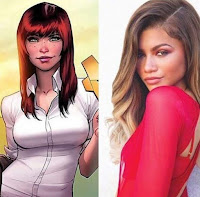 Michelle Jones likes to be known as MJ, confirming that she is the equivalent of Mary Jane Watson, albeit as a new and very different character. While she doesn't have much in common with Peter Parker's girlfriend and sometime wife, she does act as an observer character keeping him on his toes in the same way, and making her MJ hints very strongly that the two of them will get together in the future of the MCU. I'd lay good money that the next Spidey film will see them develop something of a romance, but will also introduce Gwen Stacey (or an equivalent character) to complicate matters.

Donald Glover plays petty criminal Aaron Davies, and mentioned having a nephew in the borough. That nephew is Miles Morales, the second Spider-Man of the Ultimate Comics universe and currently one of two Spider-Man, along with Parker, in the mainline Marvel comics. Glover voices Miles in the Ultimate Spider-Man animated series, and campaigned to play Spider-Man during the run-up to The Amazing Spider-Man. Director Watts was aware of this and cast Glover in his movie, setting up Miles for potential inclusion in the MCU in future.

Jacob Batalon's character Ned is probably named after of Ned Leeds, a recurring character in the comics, although he has no official last name in the films yet. In the comics, he is a friend and rival of Parker at the Daily Bugle, and is eventually brainwashed to become the third villain known as the Hobgoblin. There is virtually no chance that Ned here is going to live the life of Ned Leeds in the comics, and hasn't much in common with that character. Exec. producer Eric Hauserman Carroll states that Ned is a composite of several characters, but the character he has most in common with is Ganke Lee, best friend of Miles Morales. Ganke goes by the name Ned as an alias. 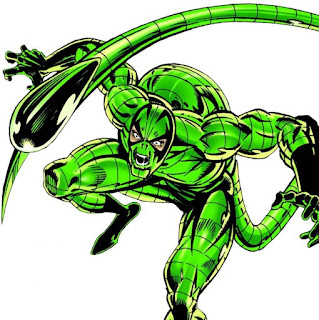 The criminal called Gargan is best known in the comics as the Scorpion, hinted at, not exactly subtly, by the scorpion tattoos on his neck in the film. The version in the film is based on the Ultimate comics version of the character, who was a petty criminal. As well as being a recurrent villain as the Scorpion, he becomes one of several characters to take on the Venom symbiote, and even acts as Spider-Man for a short time, albeit in a not-very-heroic way. Given that Sony have resurrected their plans for a Venom movie, I think it's highly likely we'll see Gargan as either the Scorpion in the next Spider-Man film, the new Venom, or both. The rights issue is complicated around reusing characters from this film, however.

The film features two versions of classic Spider-Man villain the Shocker, who wields gauntlets that produces sonic shockwaves. In a nice touch, the gauntlets leave a yellow residue on his jacket sleeves which approximates the look of the comic version's costume. Initially it is Jackson Brice, better known as Montana, who wields the gauntlets and the name Shocker, taking the lead from the Spectacular Spider-Man animated series, which combines the two characters. He doesn't last long, and is replaced by Herman Schultz, the traditional holder of the title.

Sony's previous Spider-Verse lineup included Sinister Six, which went on the backburner along with much of their plans, in spite of a lot of set-up being included in The Amazing Spider-Man 2. However, with the Venom movie back on the cards, we might see Sinister Six enter production after all. The Vulture was an original member of the Six, with the Shocker joining the Sinister Six and Sinister Seven at different points. The Scorpion never technically joined the Sinister Six, but Mac Gargan was part of the team during his time as Venom, and he was a member of the equivalent group, the Insidious Six, in the classic 90s Spider-Man cartoon, and a couple of versions of the team in the Ultimate Spider-Man cartoon series. As all three villains survive the events of Homecoming, there's a pretty good chance they'll be in the Six should the movie eventually materialise.

Michael Chernus's character, Phineus Mason, is better known as the Tinkerer, an inventor of great skill who has provided numerous comicbook villains with technology and equipment, and has been affiliated with the Sinister Six, the Ultimate Six and the Masters of Evil in various iterations. In Homecoming, he adapts Crossbones's weaponry into Shocker's gauntlets and creates the Vulture's flying armour from Chitauri and Stark technology. His whereabouts are unconfirmed at the end of the film, so it's a cert that we'll see him again. Odds on he creates the Scorpion suit for Gargan.

Among the many names listed in the credits are some notable inclusions among Liz's group of friends. Jorge Lendeborg plays Jason Ionello, J. J. Totah is Seymour O'Reilly and Ethan Dizon is Tiny McKeever, all part of the general gang of popular dickheads in classic Spider-Man comics and animated shows. More surprisingly, traditional Parker-love interest Betty Brant is listed, played by 16-year-old Angourie Rice. Betty Brant is normally based at the Daily Bugle during Parker's journalist career, rather than a kid as she is here. Tiffany Espenson plays Cindy, who is likely a reference to Cindy Moon, who has quite recently been introduced as the superhero Silk in the comics, a character who was bitten by the same spider as Parker.

Most of the teachers are basic background Spider-Man characters, but Coach Wilson, played by Hannibal Buress, dates back further, to Stan Lee's 1955 creation Meet Miss Bliss, in the pre-Marvel days. The headmaster of the school, Principal Morita, is seemingly a descendant of Jim Morita of the Howling Commandos, and is played by Kenneth Choi, who played the earlier Morita in both Captain America: The First Avenger and Agents of SHIELD.

Director and producer Kirk Thatcher appears briefly as an ageing punk on the streets, reprising his cameo from Star Trek IV: The Voyage Home (he's the arsehole on the bus who Spock nerve-pinches). This conclusively proves that the MCU and Star Trek share the same universe.

Some guys just doing their job 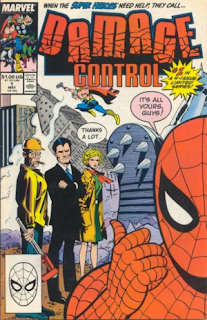 Damage Control, the clean-up company here owned, like everything else, by Stark Industries, first appeared in 1988, gaining their own title in 1989. They've appeared several times since then, leading their own comedic adventures while also being significant players in major Marvel Comics events. This is there first appearance in the MCU, although the film makes it clear that they've been doing the hands-on work behind the scenes since Avengers Assemble, although previously we've only seen SHIELD agents cleaning up battle sites. In the comics, the company was initially jointly owned by Tony Stark and Wilson Fisk, and given the timescale here, there's no reason this can't be true of the MCU. It's founded by Anne-Marie Hoag, played here by Tyne Daly, and the character is the current owner of the company in the comics. Two years ago, ABC ordered a pilot for a Damage Control live-action TV series from Ben Karlin, intended as a comedy series set within the MCU, but so far there has been little news on this. Given the appearance of the company in Homecoming, it's quite likely the series will be developed at some point.
Posted by Daniel Tessier at 22:00