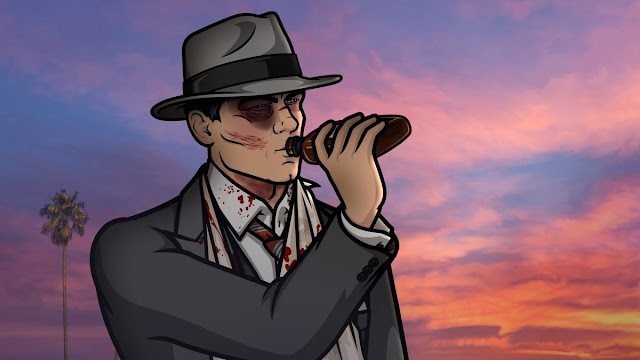 Archer is possibly the best, most definitely the funniest, animated series of the 21st century so far. Over its now eight seasons, it's moved from international espionage, through adventures under the sea and in outer space, to season-long adventures in cocaine smuggling and the PI business. And now, it's become a film noir, albeit a batshit crazy one.

Season seven ended with Archer grievously wounded, face down in a swimming pool. As we enter season eight, subtitled Dreamland, we find he has been lying in a coma for three months. In his head, he has conjured up his own fantasy world, set in 19-something (probably about 1947; amazingly, this is the least anachronistic season yet). Like the previous run, Archer is part of a PI agency, only this time, it's just him and his partner. Or at least, it was.

Following the death of the great George Coe in 2015, Archer's long-suffering valet Woodhouse has been absent from the series (although he was recast for a single season for Archer Vice). In a surprisingly touching sentiment, Dreamland is not only dedicated to Coe, but the death of Woodhouse is the driving plot point, occurring both in “reality,” and in Archer's fantasy, in which Woodhouse was previously his partner. Which is a hell of a step-up, even if he was still a heroin junkie.

The season-long arc revolves around Archer's quest to discover who is responsible for his partner's murder. It's the most coherent storyline we've yet had from a season of Archer, which was pretty all over the place even during the Vice story, but as Archer himself says, he does have a tendency to get sidetracked. Limiting the run to only eight episodes helps, of course; there just isn't room for too much meandering adventure. Archer's fantasy world is populated by fictionalised versions of various characters from the series, including all his former-ISIS chums. Some of the changes are fairly minor and predictable: Cheryl/Carol is now Charlotte Vander-Tunt, even richer than her “real” counterpart and just as unhinged; Lana is a lounge singer who you don't want to mess with, and Mallory is the owner of said lounge, the Dreamland club, and also a mob boss. Known simply as “Mother,” she slips into that role extremely comfortably.

Other characters are changed in unexpected ways. Cyril, always a dick but pretty sympathetic in a pathetic sort of way, becomes an out-and-out villain as a crooked cop. Pam undergoes a sex change, albeit with the same face and voice, as his partner Detective Poovey. Her personality is much the same as usual, albeit less sex-crazed. Then there are characters who slip into the postwar environs just perfectly: Ray is a musician for an otherwise all-black band, and Krieger is Krieger, as always. A very welcome addition to the regular cast is Jeffrey Tambor as Trexler, Mother's opposite number once again as a rival crime lord. Oh, and Barry's back, although now he's called Drake and he's more insane than ever. (Other Barry's back as well.) Seriously, his storyline comes to the fore in the final two episodes and he is absolutely terrifying.

Everything is done in Archer's signature style, with action, violence and inappropriate humour to spare, and the animation is gorgeous. Although the story is more concise, there are still plenty of bizarre non sequiturs. It's a weird set-up, all told, with the story never quite clear about how much is real or not. Everything is supposedly in Archer's head, but not only does he have flashbacks to WWII, there are long scenes that don't involve him, and involve knowledge that is kept from him. There's even a running joke concerning Poovey's fantasy involving a dozen Chinese whores (really, it's easier to watch it than to explain it), which is supposedly a fantasy in the mind of a fantasy character. Possibly, just possibly, this really is a parallel universe, which just might be born out by some of Archer's dialogue in the last episode. If so, it makes the events mean something more. Because, after all the developments and twists, there's no real resolution. I wasn't expecting Archer to wake up, but for there to be some kind of psychological resolution for him. Even after a thrilling adventure, it all feels a bit inconsequential.


Which might not matter if Dreamland focused more on humour than story. Try as it might, this season just isn't as funny as the previous ones were. While the last few seasons haven't quite lived up to the original ISIS years, they've still been pretty hilarious, while Dreamland feels a bit tired joke-wise. The adventure makes up for this, but only until that last episode, where it all feels a little pointless. Season nine has already been revealed to continue Archer's fantasy, in a new setting as Danger Island. Maybe we'll get some kind of closure with the tenth, and final, season. Or maybe there'll be a different fantasy setting with every episode. Personally, I'm still holding out for a Trek-themed “STARcher.”

This review was typed in Georgia.
Posted by Daniel Tessier at 21:05