I now have my hands on Space Dandy (thanks, Helen!) so I can finally complete my Dandy Space Logs. Here's the penultimate entry, with the two most romantic episodes in the Dandy canon.

To shake off her meathead ex, Scarlet hires Dandy to be her stand-in boyfriend.

He's Dandy, Baby: Dandy thinks he's worth way more than 750 woolongs per hour. He's a decent skier and a hell of a swimmer. He does have a tendency to get overexcited and steal things off nearby children, such as toboggans and binoculars, but he insists it's just borrowing. While on the beach with Scarlet he flirts with other girls, and later takes her to BooBies, where he flirts with Honey. On the other hand, he can be pretty gallant, offering to give Scarlet a piggyback home when her shoe is broken, fighting off an alien spider (and destroying her apartment in the process), and standing up to her ex. While he's with Scarlet, he's a lot luckier, catching a bunch of new aliens (see below), although it's actually Scarlet who captures the bunch at the ski resort. 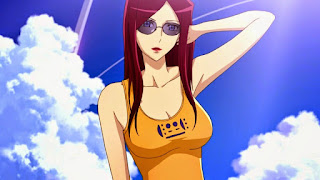 The Scarlet Woman, Baby: Scarlet broke up with her hunky boyfriend Dolph months ago but she's been unable to shake him off, although Dandy points out that she hasn't been completely straight with him. Her solution is to take her paid holiday and hire Dandy to pose as her boyfriend. She draws up a contract and a rigid schedule of fun, and specified that there be no unsolicited physical contact (i.e. no kissing) initiated by Dandy. Although they continually aggravate each other, Scarlet and Dandy do start to develop feelings for each other. It's pretty likely she picks his outfits for the trip as well, unless he's secretly into the preppy, knotted sweatshirt look. Scarlet looks pretty amazing in her swimsuit (it manages to stay just the right side of fan service). Both Scarlet and Dandy are huge fans of a star called Chuck, who starred in such movies as Karate Kommandoes.

When Dolph turns up, he's flying a huge mecha, and blows up half of the orbital they're on out of jealousy. He also tries to hypnotise Scarlet, which is pretty damned evil. Fortunately, he's arrested on charges of assault and stalking, and is banned from going within ten thousand parsecs of Scarlet.

They're Sidekicks, Baby: Having spent a week hunting an alien on Dandy's say-so for no reward, Meow and QT basically bully him into taking Scarlet's job.

I Know This Planet, Baby: The planet Trendy is a moon-like rock, but it is covered in pressure domes that house different environments, including a ski resort and a beach. There are orbital stations as well, including Yamashita Colony, where you'll find Cafe Bar Crystal. There's also the Orbital Escay, an escalator that takes visitors into orbit to watch fireworks. Trendy has Trendy police, who are pretty trendy.

They definitely speak English in Dandy's universe (at least in the English dub, of course).

At the ARC, we catch a glimpse of a gigantic metallic alien from nebula M78. As well as being a real nebula in Orion, this pegs the alien as being an Ultraman. 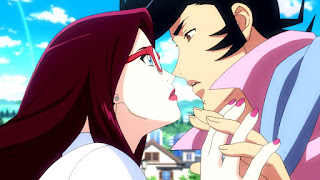 Dandy also catches a giant cuttlefish alien which goes for 5000 woolongs, and a bunch of aliens at the ski resort that look like a snowman, an oni and even Santa Claus.

Scarlet is freaked out by a spider in her bathroom.. which is fair enough, because it's the horrifying head-spider-thing from The Thing.


The Bottom Line, Baby: A very sweet, heartwarming episode, although those closing scenes on Yamashita are a gutpunch. Everything is back to normal at the end, of course, although you can't watch this without desperately wanting Dandy and Scarlet to get together.

Ten years ago, Dandy was in a relationship with Katherine, which ended poorly when she decided she would rather be with Paul. Oh, and Paul is a two-dimensional life form, and Katherine four-dimensional.

He's Dandy, Baby: Dandy is still stung from his break-up with Katherine, although it's now long enough ago for him that the details of the relationship are fuzzy. Katherine offered to tell Dandy the secret of warping, but he declined. For one thing, he'd rather work things out for himself, and for another, he's heard warping can make you go bald. Ten years later, he's been warping across the universe chasing rare aliens, and has discovered the truth for himself. In the subs, he states he has "two hundred pasts and futures." In spite of his heartache, Dandy goes to extraordinary lengths to help Katherine, although the chance to stick it to Paul probably plays into it as well. Still, this is the most mature we've ever seen Dandy. Katherine is the only one who can see the different iterations of Dandy separated by warping. 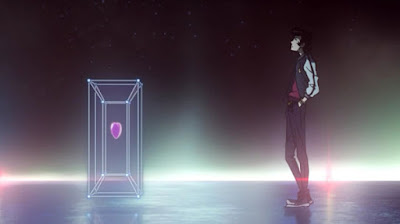 Fourth-dimensionals: Katherine manifests in the 3D universe as a rotating tesseract, her only distinct feature a beating pink heart. She no longer has any love for Paul, citing two dimensions as just too much of a difference, and although she clearly still has feelings for Dandy, understands that they exist in two entirely different worlds. As a four-dimensional being, Katherine has a different conception of time and reality to mere third-dimensionals.

Second-dimensionals: Paul is the prince of the 2D universe, having ascended to the throne and let it go to his head. Well, I say head; he appears as nothing more than a blue rectangle with a crown on. Paul has spent the last ten years pursuing Katherine across the dimensions and has brought his entire universe crashing through our own in order to finally track her down.

Phenomenology, Baby: An unknown energy source appears in orbit of the planet Abbot, heralding the eruption of the 2D universe into our 3D continuum. The 2D universe is vast, but finite, displaying immeasurable energy and mass, and appears as a flat plane travelling through space. The Gogol Empire musters a fleet of ships to attack the invading universe, but their 3D weapons have no effect on the 2D topology. In theory, it should be easy for Dandy to take Paul by surprise and drop in on him from his higher-dimensional vantage point, but Paul is canny enough to roll up his home 'brane and hide in its innermost point. Dandy uses a huge pair of shears on the Aloha Oe to cut through the dimensional membrane and pierce the layers, sending destructive spatial shockwaves through Paul's universe. In order to power the warp drive that warps his universe into ours, Paul has captured a one-dimensional universe, which erupts when hit by Dr. Gel's weapons, unleashing further energy.

The secret of warping: there's no such thing as warping. When we warp, we just move through the space between universes, switching from one universe to another where we exist at a different location. Dandy's understanding of this sets him apart from other 3D beings.

They're Sidekicks, Baby: Neither Meow nor QT can see what Dandy sees in Katherine. As far as they can see, she's just a box.

You're My Candy Girl, Baby: Dandy takes Katherine to BooBies, naturally, where she chats to Honey. Honey's keen to know what it's like being Dandy's girlfriend, but is more interested in making Paul her Prince Charming. It's Honey who comes up with the idea of punching through the rolls of the 2D universe to get to him.

There's Bad Guys Too, Baby: Dr. Gel is determined to discover the source of the energy surge, and his ship is then absorbed into the 2D universe, becoming 2D itself. Bea is absolutely terrified by the idea of being stuck in an other-dimensional realm, or becoming lost between dimensions, but Gel is thrilled. "The happiest moments of a scientist's life," he says, "are when he faces the unknown." He goes after the source of the 2D universe's power in typically violent style, though, and when he unleashes the 1D universe, he and Bea are reduced to a one-dimensional state, nothing more than sound waves on a single line. They are then absorbed into a zero-dimensional universe, lost forever to the singularity.

The Bottom Line, Baby: Space Dandy at its most heartfelt and thoughtful at the same time. This is a dazzlingly imaginative episode with some remarkable visuals. Although it takes its inspiration from Flatland, the classic work by Edwin Abbott (hence the planet Abbott), it uses the idea to riff on video games (especially Space Invaders and, of course, Galaga). Only Dandy could turn this into such an affecting tale of romance.
Posted by Daniel Tessier at 17:46