A belated review of the most recent complete run of Doctor Who comics to feature the eleventh Doctor (I may cover Ten and Twelve later, we'll see). Titan Publishing's "Eleventh Doctor, Year Two" ran from late 2015 to the end of 2016, but I've been catching up via the UK reprints in Tales from the Tardis, which appear on stands about six or seven months later. The storyline has also been published in a series of trade paperbacks: The Then and the Now, The One, and The Malignant Truth, so there's no shortage of ways to read the story. 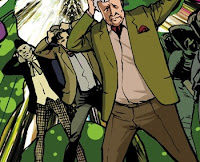 And a truly excellent story it is. The full "year" comprises a fifteen issue storyline, from "The Then and the Now, Part One" through to "Physician, Heal Thyself," charting an epic adventure that crosses the Doctor's timeline from the depths of the Time War to the high times of the eleventh Doctor. Written by Rob Williams and Si Spurrier, the series features a number of artists, although for me, Simon Fraser's idiosyncratic style suits the story best. Regardless, there's a consistency to the story's art in spite of the mix of artists, a rare feat for an ongoing strip with different artistic contributors. It's a story that deserves a strong visual style, as it demands that the story sticks in the mind.

If you're not a fan of the Time War mythos that has become so important in modern Doctor Who, you won't enjoy this series. Although the Time War was an essential part of the backstory of the ninth and tenth Doctors, the series moved on from it during the time of the eleventh, only for it to become the driving force of the fiftieth anniversary special. The comic series revives this focus, bringing the eleventh Doctor and his comic strip companion Alice Obiefune into contact with the his war crimes. The Doctor doesn't even remember the apparent genocide at his own hands, and it is most certainly impossible for elements to be spilling out from time-locked events into his relative present. Nonetheless, the Doctor and Alice are pursued through time and space by the eponymous Then and the Now, a warping ripple in humanoid shape that is both a bounty hunter and a walking temporal paradox. 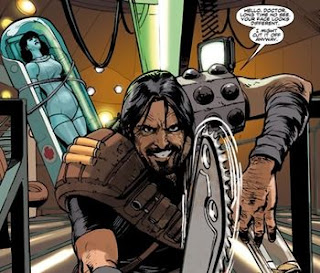 It isn't only Alice that joins the Doctor. On the course of his travels he is joined by various other adventurers, not least of whom is Abslom Daak, Dalek Killer! Anyone who's read my reviews of the seventh Doctor comics will know that I'm not a fan of Daak. He's a one-note joke on the sort of macho 90s antihero that is unbearable unless written with considerable finesse. Thankfully, then, here he is written with finesse, becoming a far better foil for the eleventh Doctor than he ever was for the seventh. It actually works very well, since the eleventh Doctor can be just as manipulative as the seventh, and has no qualms in using Daak as a blunt instrument.


Another blunt instrument the Doctor is fond of is River Song, whom he breaks out of prison to ehlp him on his mission to track down the truth of his own past. Then there's the Squire, a frankly wonderful new creation. The Squire is an elderly space knight who supposedly acted as companion to the Doctor during the War. The Doctor, however, has no memory of her, and the truth behind his faithful companion's past is just one of the mysteries he has to explore. 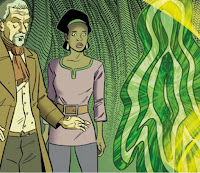 Events conspire to drag the Doctor and his team throughout the continuum, from a Sontaran battlefield to the prison asteroid Shada. The current crisis is entwined with the Doctor's past, and two whole issues go by without the eleventh Doctor's appaearing at all. Alice is drawn back, in an apparently impossible manoeuvre, to the depths of the Time War, to come face-to-face with the War Doctor, who then leads the storyline until future and past catch up. The War incarnation is not alone, however. Needs must as the devil drives, and he has allied himself with the Master, here presented in a previously unseen incarnation that appears as dark-haired young boy, which is even more sinister than it sounds. 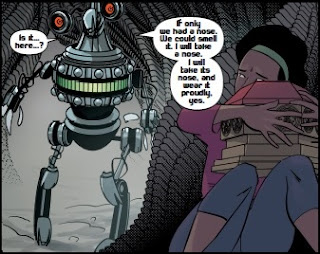 Where we find the Time War, we find Daleks, and this story presents the worst, most monstrous Daleks ever. The Volatix Cabal are an elite group of Dalek mutants created to fight the Time Lords, not unlike the Cult of Skaro, except that these Daleks have taken creativity and individuality to its extremes. Twisting their bodies and minds into horrific shapes, they have driven themselves insane, and seek to spread pain and fear throughout time, screaming "ExterminHATE!" wherever they go. They are an absolutely absolutely terrifying creation, and their distorted forms are the enduring image of this story. However, Abslom Daak was born to kill Daleks.

In a story that twists and turns into paradox after anomaly, the Doctor faces consequences of his hardest choices. I often felt during the early 21st century series that there was scope for more exploration of the fallout of the Time War and the Doctor's actions within in, and these comics are a perfect example of the stories this approach can generate. Showing the Doctor in his worst but most interesting light, Titan's "Eleventh Doctor, Year Two " is a superior Doctor Who comic.
Posted by Daniel Tessier at 13:30