Irony: an episode about a society in which criticism has been banned being the most critically panned episode in recent years.

The central idea is pretty promising. A society in which no one is held accountable for anything, no one learns how to do their jobs because positive criticism is illegal, where no one can insult or belittle anyone, no matter how idiotic. This could have been a Hitchhikers-eqsue satire. This could have been a timely attack on the fragile nature of people's egos and the tendency of people today to take anything as an offense. It could have gone down the route of Incompetence, Naylor's old stablemate Rob Grant's novel, where no one could be dismissed or barred from a position no matter how ill-suited or unable they were. We might have expected a few pokes at a certain notoriously incompetent and idiotic POTUS, except that these episodes were written and filmed before that world-damning election.

What we got was a bunch of people in children's television "crazy" costumes acting like irritating prats, and not the class of irritating prat that we're used to getting with Red Dwarf. It was a bit of a warning sign when the promo photo released was of Johnny Vegas in a baby pink police uniform, but he's actually the best thing in this episode. As the Crit Cop, Vegas's performance is just the right combination of frustrating and likeable, and his style fits in nicely as part of the Dwarf's world. (It's easy to imagine Vegas playing a crewman on the Red Dwarf back in pre-accident days, and he's apparently a big fan of the series, which is nice to know.) He's a damned sight better than Jamie Chapman as Captain Ziggy, although, to be fair to him, he had pretty poor material to work with. 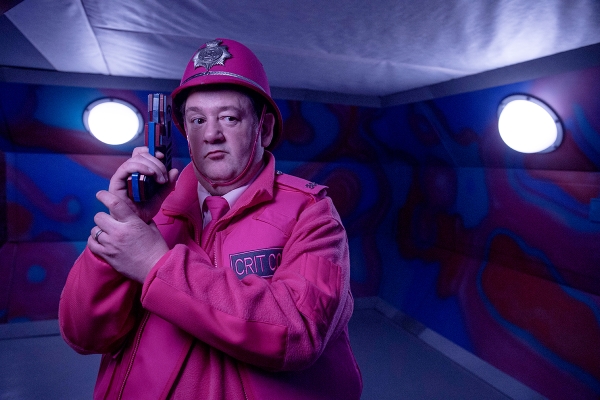 The better parts of the episode centre on Rimmer. The opening scene on the newly-christened Planet Rimmer (actually a moon rich in the valuable isotope Helium-7) is a corker, and it's easy to see why it was chosen as for early release as a teaser. Later in the episode, when the Dwarfers have been arrested and sentenced to "draining" due to their critical nature, Rimmer's inner critic proves too powerful for the process and manifests as a scar-faced, skin-headed alter ego.

This scary bugger was also seen back in the trailers and appears in the opening titles, and I had expected him to turn up in the final episode, "Skipper," which is a Rimmer-centred one that promises the potential of variant Rimmers. However, although it's a suitably unnerving performance from Chris Barrie, the scary Rimmer is exists for a fairly quick joke and is dispatched pretty quickly. Also, why does the scar on his face form a letter P? Is it just a random shape, or is it supposed to mean something? Why not a big H? 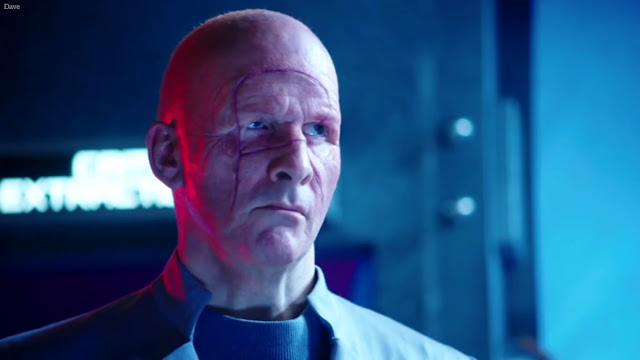 The episode is paced much better than the previous couple; it has a central idea that it explores and deals with it in the time allotted without any tangents that overstretch it. The problem is, it just isn't very funny. Even thinking of a best line is going to be a challenge on this one. Still, Suz liked it. It reminded her of work.

Title-Tattle: The timewave of the title is an interesting concept that could have fueled a sci-fi adventure for the team. However, after five minutes of Kryten expositioning about it, it's forgotten about as soon as the SS Encomium is washed up. I get the feeling this episode started out being about the timewave but drifted during writing.

Something I learned: An encomium is a Latin-Greek term for a piece of work that praises someone or something. Along with the Samsara in 10.2 (referring to the karmic cycle) and last week's Vespasian (after the Roman emperor who rose from peasantry), Naylor is getting terribly clever with his ship names.

Continuity Bollocks: Rimmer suggests the Helium 7 will be worth a fortune if they ever get back to the 23rd century. So their original century still hasn't settled down then - no one can agree if it's the 21st, 22nd or 23rd century. The Encomium originates from the 24th century, and it's got to be said, the idea of Lister as the last human being alive has pretty much died off now - as well as these guys, the entirety of the Red Dwarf crew is out there somewhere following the end of Series VIII. 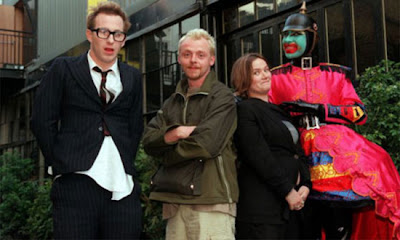 Best line: "In the same spirit of benevolence, I've also graciously agreed to lend my name to the star this moon orbits, which from this moment shall be known as Sunny Rim."
Posted by Daniel Tessier at 13:33