After a disappointing third episode, Series XII gets back on track with a hugely enjoyable story that gets just about everything right. After three episodes with significant guest casts, "Mechocracy" gets back to core Dwarf. It's Lister, Kryten, Rimmer and the Cat as the only humanoids onscreen, with only vending machines and other appliances as supporting characters. The story sees Lister allow a computer virus to infect Red Dwarf's system, leading to an "abandon ship" situation to which the vending machines are not invited. Long story short, the AI-run machines on the ship go on strike, so Rimmer and Kryten compete to become their president and thus control Red Dwarf. 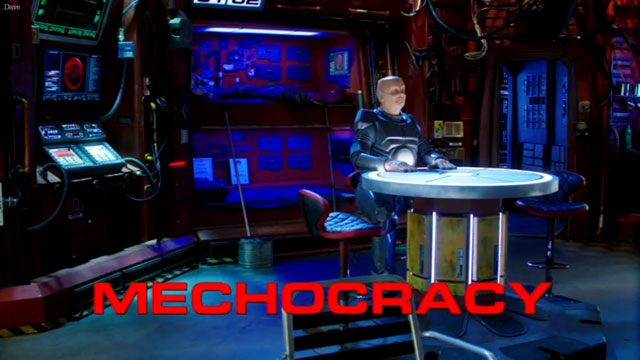 The episode starts atypically. It's just Kryten, sitting facing the camera, doing nothing. Somehow, Robert Llewellyn manages to make two minutes of face-making laugh-out-loud funny, and it's all the set-up for a genuinely brilliant long gag about the latest lesson in Kryten "mechanoid development programme." It's a brilliant, old-school start to an episode that's more concerned with character interaction than science fiction tropes.

It's impressive that Naylor is able to come up with new dynamics for the four Dwarfers after all these episodes. The episode sets up some clever interactions between Kryten and Rimmer, and notably Rimmer and the Cat, two characters who are rarely on the same side in spite of their similarities (they're both utterly self-centred and self-absorbed, after all). There's also a running sideplot concerning the Cat's adoption of reading glasses, a nice element that's one of a few nods to the cast's ageing that the series has made since the tenth run.

I'm loving all the callbacks to the classic run that we've been getting this series, and while it's very easy for things like this to get out of hand and spoil the story, this episode plays it about as far as it can while still getting away with it. While the vending machines and skutters, a major part of Series X but calling back to the first two series, are a significant presence here, this episode calls back loudest to 4.4, "White Hole." To begin with, the virus and the imminent black hole situation calls back to the dead ship and the planetary collision course in that classic episode, and before the half hour's out, Talkie ruddy Toaster's back. After my mini-complaint that David Ross didn't come back to play a mechanoid in "Siliconia," he's back to voice the bread-obsessed maniac. The effects team even recreated the toaster's-eye-view shot. 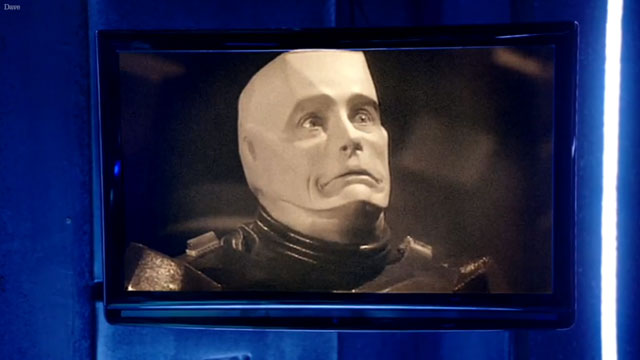 On top of this, both teams (The United Future Party and the Lovely Fluffy Liberal Alliance) employ smear campaigns that make liberal use of clips from classic episodes. It's wanky fan service but it works in the context of the episode and adds a little something for us old school fans. Alongside all that, though, is some pretty on-point satire, as the Dwarfers skewer the political points-scoring system. It's not exactly The Thick of It - it's not even Spin City - but it's a source of some big laughs and it's a nice venture into satire, something that Red Dwarf doesn't tackle all that often. Although this was written and filmed over a year ago and so its targets have been dated a little, people are still banging on about Brexit over here, and the abortion debate in the States, and in fact, now that we've seen some of the consequences of 2016's political events, stupid vending machines who'll vote for any sugar-coated bullshit are more tragically funny than they might have been a year ago.

"Mechocracy" is also a perfectly paced and well-structured episode, ending with a strong closing gag and not once feeling like it is taxing its runtime. A real high point for the series so far.

Continuity Bollocks: Apparently, Rimmer has wiped out the crew and got himself killed twice. Is this a reference to the mysterious consequences of Series VIII? Or are they just referring to his second death in 3.5, "Timeslides?"

Best line: (Rimmer, on yellow alerts) "It means someone's in danger, and it isn't you. A perilous emergency you can kick back and enjoy."
Posted by Daniel Tessier at 15:43