It's been a good few years since I last saw Neil Hannon perform. Uninterested in going along to the Foreverland Tour in 2016 - the last album being, let's be honest, rather boring - I was excited to see the Divine Comedy again. It had been too long, and the new album was said to be something of a return to form. Office Politics sees Neil embrace the sillier side of his music again, crafting a concept album about work, life and technology, and indulging in a passion for synth pop; a genre he's always played with, but lately and suddenly pushed to the fore. Office Politcs, then, sees a bunch of styles thrown together in a way that shouldn't really work, but somehow does, united by a tongue-in-cheek pretentiousness. Which is exactly what the best DC albums always were. 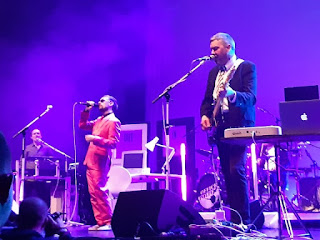 The best album tours throw in a bunch of old favourites, of course, and so the Brighton Dome performance could only really start one way. It had to be "Europop," one of the band's first singles in its earliest iteration but here performed in its reworked electro version from 1993's Liberation. Sporting a pink suit which fit the atmosphere of Brighton better than it fit him, Neil performed in an office set with talented support. Playing with the set is a new approach based on the performances I've seen before, with Neil using the setting to tell a story of a working life from joining the company to the ritual discomfort of the office party. 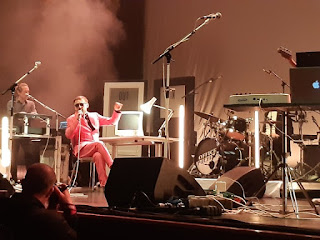 Both singles from the album were of course featured: the catchy, privilege-poking "Queuejumper" and the adorable "Norman and Norma," the hit of the album for me. However, the songs that worked best live were the less celebrated ones from the album, particularly the tragicomic "Life and Soul of the Party," and its follow-up, the gorgeously 80s ballad "Feather in Your Cap." It was probably a mistake to perform the two pretentious hard-synth pieces in succession; after dragging through the sub-Kraftwerk "Synthesiser Service Centre Summer Super Sale," the audience weren't particularly in the mood for the more upbeat but still synth-heavy "Infernal Machines." However, the wistful "You'' Never Work in the This Town Again" and "I'm a Stranger Here" regain a lot of DC's classic charm and worked beautifully live. 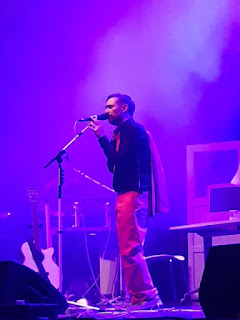 Neil Hannon's other calling, of course, has been writing theme tunes for sitcoms, and his theme for the non-existent comedy series "Philip and Steve's Furniture Removal Company" is even more of a standout oddity live than on the album. It was the old favourites, though, that kept the atmosphere buoyant, with the obligatory but always beloved "National Express," "Something for the Weekend" and "Generation Sex" getting rousing renditions. I was pleased to hear several favourites from Absent Friends, including a heartfelt performance of the title song, probably the best single piece of the evening. "Commuter Love" and "Come Home, Billy Bird," fit so perfectly with Office Politics' themes that it would have been foolish not to include them.

Switching between new and classic material kept everyone happy, and we were crying out for the second encore.
Bowing out to "Songs of Love" and "Tonight We Fly," Neil steadfastly refused to sing "My Lovely Horse" from Father Ted. Well, it was worth requesting, that man in the audience. He has sung it before at gigs, after all - when I asked him.


All photos sneakily papped by my sister Rebecca Tessier.
Posted by Daniel Tessier at 22:15