FANS WHO: Mission to the Unknown 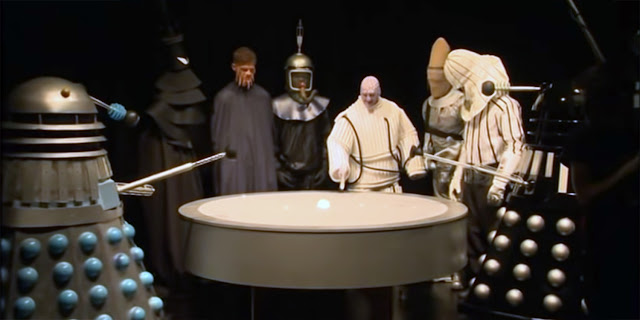 This has to be the great triumph of the Doctor Who fan film world. I guess Devious made a big name for itself, getting Jon Pertwee involved and all and making it as a DVD extra, but this is something special. A university drama project impressing the BBC enough to air on their official YouTube channel, with heavy coverage in DWM. In effect, this is now the official BBC version of Mission to the Unknown, given that the original is long gone and only exists as a soundtrack. The University of Central Lancaster has usurped the original episode, 54 years to the day.

Mission to the Unknown is a canny choice by . There are a lot of Doctor Who episodes missing from the archives, but this is one of the few that looks honest-to-goodness gone for ever. There's not a scrap of footage left, there's no indication that any copies sold abroad were retained by their buyers, and there was just less interest for many years since it doesn't feature the Doctor or his companions. This one is not turning up in someone's lock-up.

However, the very fact that this is such an oddity amongst Doctor Who episodes works in its favour as a fan project. There's no need to recast the Doctor or his companions, and barely anyone watching today has seen the episode's star Edward de Souza in the role as space hero Marc Cory. The fan production can really stand on its own.

The UCLan version of Mission really stands up. We can't see the original but, judging from what's left of the follow-up The Dalek Master Plan, the student version looks easily as good as the original. The starship set and the jungle of the planet Kemble look spot-on; yes, they're a bit minimalist and claustrophobic, but that was exactly what the sets were like in the 1965 Doctor Who. Black and white hides a lot of sins, and while this would look pretty cheap in colour, it looks classy in monochrome.

The video quality is a lot better now, of course, so the limitations of the monsters, faithfully reproduced, are going to show up a lot more. The Planetarians look cheap here, but that rather adds to the charm. They were cheap in 1965. This is a recreation of the original Dalek Cutaway, right down to Paul Stenton's hissing barrow boy performance as Malpha. Seriously, if anything, the original was more ridiculous.

Of course, the UClan crew have achieved a real coup getting Nick Briggs in to voice the Daleks. When combined with some excellent Dalek props, having the official Dalek voice artist makes these pepperpots the real deal. Briggs, to his credit, strikes a balance between recreating the idiosyncratic voices of the time and his tried-and-tested modern Dalek staccato. It's not the first time Briggs has recreated the Dalek voices for a fan production, of course, even since he became the Beeb's main monster modulator, but it still lends an air of authenticity to the production.

Then it's down to the human cast. Marco Simioni takes over from de Souza as Marc Cory, with Dan Gilligan as the long-suffering Lowery. Yes, they're a bit hammy, yes, there's some slightly wooden RP, but again, this calls back to the original episode. Listen to the soundtrack - it's hammy. You can't fault this for calling back to 1960s Doctor Who.

To think these students made this in just five days. Great work guys.

And those Varga plants are just the cutest.

Watch the episode here.
Posted by Daniel Tessier at 22:40