Catching up with my Doctor Who reviews, beginning with some comicbook releases featuring two very different Doctors. Titan has been publishing Doctor Who releases for a good few years now, with some of the best comicbook material for the Doctor in years. Their releases have included both ongoing and limited series for new and classic series Doctors. Lately I've picked up the third volume of the collected Thirteenth Doctor series and the collected Third Doctor miniseries.

The Thirteenth Doctor comics have been running for a little while, and I've dipped in from time to time, but it's this third collection, which was released in trade at the very end of 2019, that caught my fancy. Arriving on the planet Devivian with the fam, the Doctor is immediately arrested for crimes committed by another two-hearted, time travelling woman. Probing for a few more details, the Doctor discovers that a dark-haired Time Lady has stolen a powerful relic from Devivian. (Is that a reference to The Vivienne, or was I just watching Ru Paul's Drag Race UK too much while reading this?)

Naturally, she assumes this is Missy ("And she was doing so much better,") but when she gets on the trail of the thief, it turns out to be none other than the Corsair, making their first ever appearance in an actual Doctor Who story, rather than as a bit of background colour. In this incarnation, the Corsair is a beautiful, wild woman, an unrestrained swashbuckler. She and the Doctor have a brilliant dynamic; very clearly friends for years, with a hint of mutual attraction, even though the Doctor doesn't quite approve of the Corsair's methods. 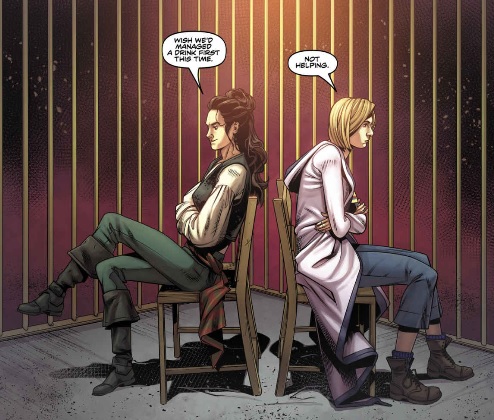 Jodie Houser nails the dialogue of the Thirteenth Doctor and her companions (for better or worse - the occasional clunkiness feels deliberate here), but she's clearly having the most fun writing for the Corsair. It's surprising that it's taken so long for the character to make a full-fledged appearance. "The Doctor's Wife" was back in 2011, and aside from Neil Gaiman's own potted history of the character in The Brilliant Book, the character has failed to materialise in anything official. The Corsair is much like the Doctor without the rough edges worn off, the Doctor who upped and stole a TARDIS and didn't care about the consequences. It's tremendous fun watching them share an adventure, even as there's an underpinning of sadness, as the Doctor knows that it can't be long in her friend's future that they die. (Going by the reproduced material about the Corsair in the appendix, this is probably the seventh incarnation of the Corsair, while the one who met his end by the House was the ninth. Please excuse the jumping between pronouns, by the way.)

Roberta Ingranata provides the artwork for the first three issues, with Enrica Angiolini supplying incredibly rich colours, and together they make the various planets visited absolutely beautiful. Rachel Stott takes over, with Tracy Bailey, for the closing issue, with a greater focus on strong, characterful line work that really captures the regulars. Altogether, it's a rather gorgeous book. I'd definitely be up for meetings between the Doctor and the Corsair, especially since the gender roles could be mixed up in a number of ways between the various incarnations. And the Corsair's TARDIS is disguised as a galleon, which is both impractical and awesome.


Placement: Between Resolution and Spyfall.