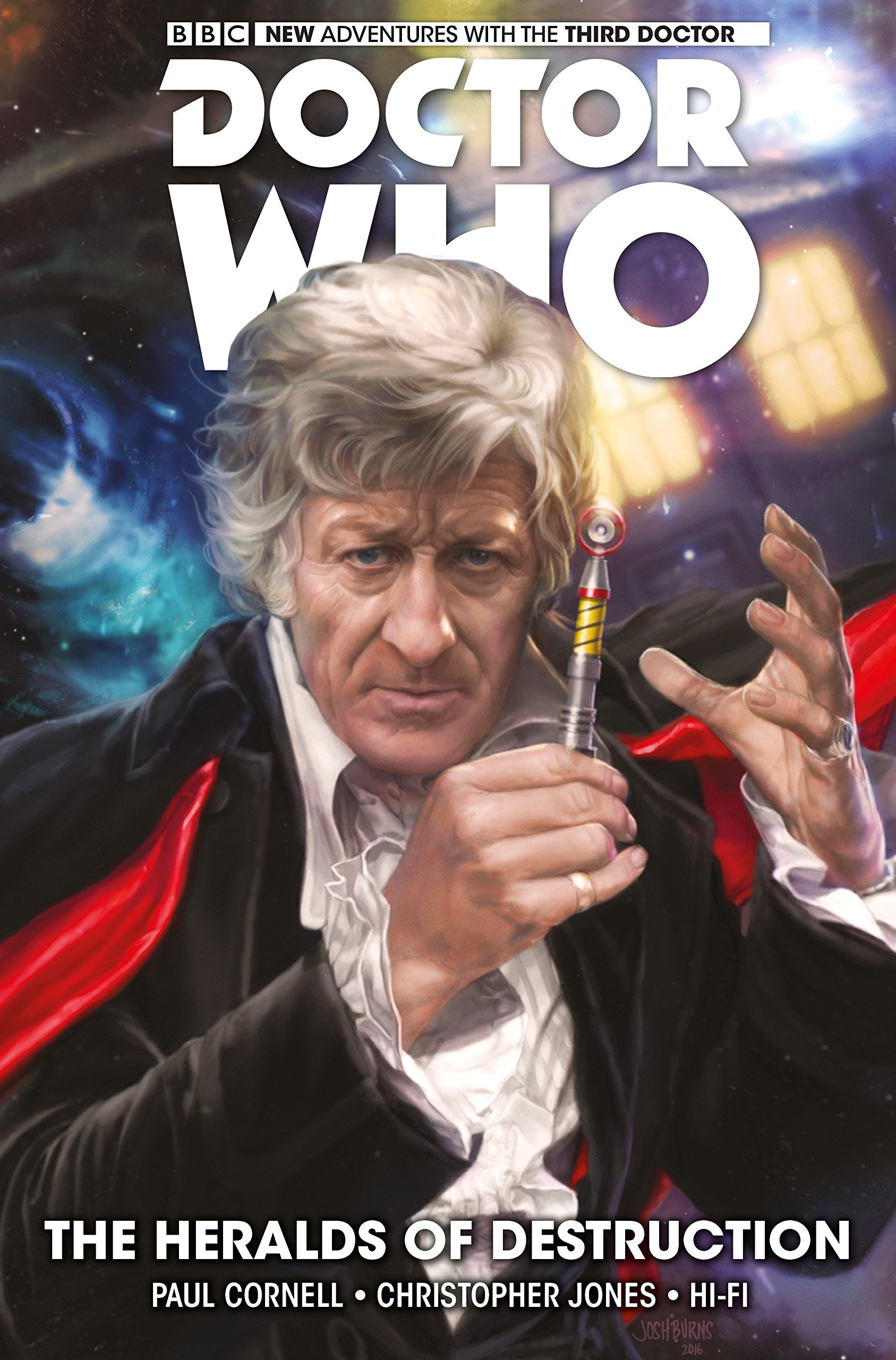 Paul Cornell was never very fond of the Third Doctor, according to most accounts, which made it something of a surprise when Titan Comics announced he would be scripting a five-issue run set during the Pertwee years. This came out in 2016-17, and I've finally gotten around to picking up the trade and reading the story. In interviews, Cornell said he had an idea that could only work with the Third Doctor, and he didn't lie. Although it's just possible that the central conceit of this comic could work with another Doctor, it would have been a rough fit. (If you haven't heard the twist or read the comic and want it to remain a surprise, scuttle off and don't read the SPOILER below.)

No, there was only one way to make the return of Salamander work, and that was to have him invade the era that followed his own. It's an idea that could have been brilliant if they'd tried it on TV in 1974, although it's almost impossible that the BBC would have run with it. After all, most viewers would have only dim memories at best of 1967 story by the time it came round. Who fans, on the other hand, understand the significance of The Enemy of the World and Patrick Troughton's dual role in the story. The rediscovery and release of the serial a few years ago makes this a particularly good time to bring back what had been an important but fairly obscure villain.

The story proceeds as a follow-up to The Three Doctors, except that the Second Doctor is not actually the Doctor's previous incarnation, but the villainous doppelganger in disguise. While we've had Doctors meet people whose faces he'll later wear (due to Colin Baker and Peter Capaldi being cast in the lead after making guest appearances on the series), we've never had a Doctor bump into someone who looks like a previous self. (OK, there's the Curator, but since it's heavily implied he's the Doctor anyway, that doesn't really count.) The Doctor meeting his double is one thing, but meeting the double of a previous version of himself creates a whole new level of meta-commentary on the nature of the series. This is Doctor Who doubling back on itself and biting itself in the arse.

The dictator of the World Zones originates from the same period that the comic was actually released, adding yet another layer of timey-wimey stuff to the set-up (a phrase that is now revealed to have been invented by Jo Grant, which is pretty perfect really). Of course, there's a convoluted backstory to explain how he survived the events of The Enemy of the World, but when your thrown into the Time Vortex, anything can happen. Salamander is more of a comic supervillain than even the Master, making him absolutely perfect for the story. Pitting him against the Doctor, UNIT, and a tenuous alliance with the Master is just about the most ideal Doctor Who comics idea that could be set within the Pertwee era.

Cornell gets all the regulars spot-on, including the Doctor, but he doesn't go lightly on him. In fact, he absolutely savages him at points. He even introduces him in a gentleman's club, going on about his old mate Pol Pot ("Polly, I said..."), a biting and very fair attack on his similar name drops of Napoleon and Chairman Mao. (Of course, much later we learn he's best buds with Winston Churchill, who from many people's perspectives isn't far different.) Nonetheless, he gets his fair share of heroic moments and, as Cornell notes in his commentary, a characteristic "moment of charm."

Christopher Jones is a fine choice of artist for the adventure, with a gently cartoony feel to his work that gives the story a colourful momentum perfectly in keeping with the era it pastiches. He delivers some brilliant set pieces, including a face-off between the Doctor and the Master and a voyage in the day-glo interior of Jo Grant's mind. I particularly enjoyed his depiction of Salamander in full-on supervillain costume, which makes him look a bit like one of the Dominators.

Cornell states in the commentary that this is his last Doctor Who story, and if that is the case, I'm pleased he stepped out of his comfort zone to provide a story for a Doctor we wouldn't normally associate him with. One thing that comes through very clearly is his love for the series, in any era. In fact, he's already bent his own rule by novelising Twice Upon a Time for Target, so maybe we'll be getting more original Doctor Who adventures from him after all.

Placement: Between The Three Doctors and Carnival of Monsters.