Planets visited: Klavdia 3 and Daled 4: Two planets with almost identical atmospheres. They don't look very pleasant from orbit, and we don't see the surfaces. Daled 4 has at least one inhabited moon (where Anya is from), and the planet is the homeworld of the allasomorphs. The planet completes one revolution per orbit, so it is permanently locked with one side in day and the other in night. The two sides have been at war for their entire recorded history. Salia's parents come from different sides of Daled 4, and so she is destined to reunite the two factions.

Allasomorphs: Shapeshifting beings whose natural form is a sort of glowing white ribbon of energy. Both Anya and Salia are allasomorphs, capable of shifting their molecular structure into that of other life forms. They've both taken human form for the voyage, Salia as a beautiful young woman, her protector Anya as a nasty old bag. Behind closed doors Anya turns into a serious fitty when she's trying to reassure Salia, then a sort of teddy bear thing that's probably supposed to be cute but is frankly terrifying. In sickbay, Anya decides she has to kill a contagious crewman and turns into a huge hairy beast, more than capable of overpowering Worf. She's a cocky bitch and thinks she's far more powerful than anyone on board (they could just beam her into space). When she threatens Wesley, Salia turns into an even bigger monster.

Shut Up, Wesley: It's a Wes episode. He falls head over heels in love with Salia the moment he sees her (I guess that's why they call him Crusher). In fairness, she's a beautiful girl who's into magnets, so she's a science nerd's wet dream. Wes gets so distracted he forgets to go to work, and spends his time asking various staff members for love advice. He then loiters outside her quarters until she comes out.

Amazingly, he manages to get somewhere with her. He woos her with chocolate, because while she's an alien, she's still a girl and girl's love chocolate, right? It helps that he's a total choco hipster snob. He takes her to see planets and asteroid belts on the holodeck, and continues to see her even after Anya and Picard both warn him off, but he treats her like shit when he realises that the pretty girl he's been snogging isn't her real form. He comes round in the end though.

Number One: Riker gives Wesley a crash course in romance, which consists of a series of nauseating lines that make him seem like a complete creep. He tries them out on Guinan, though, and she's totally into it. No wonder she got married twenty-three times.

Son of Mogh: His advice to Wesley is terrifying, but there's a hint that he's taking the piss. He begins by screaming at him, before suggesting that women throw stuff and claw at you, while men recite poetry and duck.

He's emasculated by Anya's ass-wipping of him, but develops huge respect for her and hopes to meet her again, to fight on the same side. (He should have looked her up during the Dominion War, she would've been handy then.) He says "the body is just a shell," and that you shouldn't be fooled by someone's appearance.

In Therapy: Troi can sense that the aliens are hiding something, and that their emotions don't match their outward appearances, but that's about as useful as she gets in this episode.

Stellar Cartography: By this time, only 19% of the galaxy has been charted. On the planet Thalos 7, they age cocoa beans for four hundred years.

Sexy Trek: Wil Wheaton got his first screen kiss here from Jaime Hubbard, who's ten years older than him. Good for him.

Space Bilge:  Riker says of Klavdia 3: "How could anyone exist in an environment so totally hostile to human life?" apparently forgetting that they're ferrying aliens. The crew also express surprise at how similar the atmospheres are between the two planets, which is surely the point. It wouldn't be much use sending Salia to a safehouse on a planet where she can't breathe.

Why does Picard continually open channels to Salia's quarters and then ask if he can turn the viewer on? Is he trying to catch her in the nip?

Everyone is stunned to meet a shapeshifter, who have apparently only been rumoured before, but even restricting to episodes broadcast before this Starfleet has documented shapeshifters including Vendorians, Excalbians and Antosians, and the Enterprise crew have met Q, for crying out loud.

The Verdict: Given that it's a Wesley episode, and Wesley romance at that, this episode isn't bad. In fact it's rather sweet. Still, anyone who thinks Wesley's life is wild and fascinating really has had a sheltered upbringing, and it can't be that hard to impress someone who's never tasted chocolate before.

2-11) Contagion
or
What's Yamato Wi' You?
or
Have You Tried Turning it Off and On Again?

The Mission: Respond to an urgent call from the Enterprise's sister ship, the USS Yamato.

Planets visited: Iconia, a legendary world located near the Romulan side of the Neutral Zone.

The Picard Maneouvre: Picard knows Captain Donald Varley of the Yamato on a first name basis, and he has a better sense of humour than his fellow captain (so Donald's a real sourpuss). He's been investigating the legends of the Iconians since he was a cadet, and insists on going down to the planet. He's short-tempered all episode, and doesn't take well to the idea that the Enterprise might have a design flaw. He seems much calmer once he's on the surface of Iconia actually doing some investigating, and feels in his bones that the Iconians weren't the evil conquerors of legend, knowing that history is written by the victors. He doesn't care where he ends up as long as he escapes the planet, even though he knows the odds of that are slim anyway.

Number One: He's not happy about the captain insisting on beaming down to the planet. He orders the crew to prepare for evacuation, knowing full well they won't be able to make it if the ship continues to break down, just so they can keep occupied and hopeful. He's a pretty empathetic commander in this episode. He's pinched "make it so" for when he wants to sound Picard-y.

Elementary, Dear Data: Sticks his arm through a hole in space to make sure it's not a hologram. Contracts a computer virus for his troubles, which blinds him and makes his speech erratic. He's still awesome enough to talk Picard through the Iconian systems just by description. He seemingly dies, but his system reboots and wipes his recent memory to purge the virus. 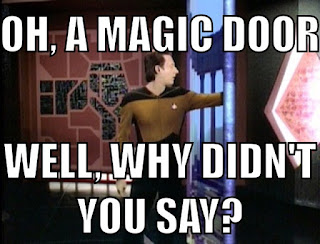 In Therapy: Troi's picking up on so much tension on the ship that she's visibly on edge.

Son of Mogh: He's mostly here to carry stuff in this episode, including Data.

Alien life forms: The Romulans: Commander Tauris of the Warbird Haakona shows up to see why the Enterprise is in the Neutral Zone, which is fair enough really. She claims the planet for the Empire which is completely illegal but since she can't do anything about it at the time it doesn't really matter. When it looks like her ship is destroyed she is comforted that she'll take Picard with her, and visibly annoyed when he escapes.

Future History: The Iconians are a legendary but very real civilisation that have been remembered as galactic conquerors and "demons of air and darkness." Their planet has been laid waste by their enemies but much of their (mostly inexplicable) technology survives. among the ruins is a "galactic Rosetta Stone" which allows Data to translate the Iconian language, which has influenced languages such as Dewan, Dinassian and Iccobar. They were a major power about 200,000 years ago.

The virus: Automated defenses on the planet launch a blue, spherical probe, crackling with energy, which scans any ship approaching and infects it was a computer virus that causes repeated and ultimately catastrophic systems failures. The Yamato is infected first, thwarting Varley's investigation into the Iconians, and then gets passed to the Enterprise. The antimatter seals on the Yamato fail along with all the safeguards, and it explodes. At first, the crew become concerned that the Galaxy-class ships have an intrinsic design flaw, until the Romulan Warbird suffers the same problems. It turns out you can fix it by turning your computer core off and rebooting it.

Iconian gateways: The Iconians travelled through the galaxy using technology centuries ahead of anything the Federation has now. The central console in the control tower opens up doorways in space that lead to other areas, including ones popping up on the Enterprise and the Haakona and others on various planets across the galaxy.

Future Echoes: Another Iconian gateway is found in the Gamma Quadrant in the Deep Space 9 episode "To the Death," showing just how far the Iconians ranged. The Iconians return, in the flesh, as the major villains in Star Trek Online.

Trek Stars: Carolyn Seymour plays Tauris. She'll be back as a different Romulan commander in season six in "The Face of the Enemy," and other roles in both TNG and Voyager. She starred in Survivors as Abby Grant and is a class act.

Cliche Count: Picard orders "Tea, Earl Grey, hot," for the first time, but the malfunctions cause the replicator to deliver a small potted plant. This is so like a Red Dwarf joke it's unreal. (Fun fact: I'm drinking tea, Earl Grey, hot as I type this! But then, I often am.)

The verdict: A solid episode with a good, tense atmosphere. Picard's in such a bad mood through much of that I half-expected him to leave the Romulans to the virus and let them blow up. The Iconians are a fascinating bit of galactic history that should have been followed up more on screen.