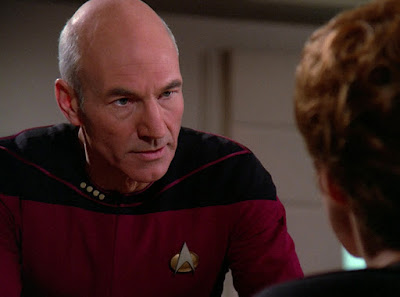 The Mission: Prove Data's right to choose in a Starfleet court of law.

Planets visited: Not one.

Starships and Stations: Starbase 173 has been established near the Romulan Neutral Zone in response to the recent Romulan contact and the devastation along the front, soon to be discovered to be the work of the Borg (see TNG 1-25). There seem to be Anticans on the station. There's an office of the Daystrom Institute and the sector's JAG office on the station, the latter run by Philippa Louvois. She's the only legal staff member at the moment since they're still staffing the station.

Elementary, Dear Data: Starfleet has evaluated Data and concluded he is not a sentient being (which isn't really in line with hints in earlier episodes). Bruce Maddox of the Daystrom Institute has ordered him reassigned to Starbase 173 in order to be disassembled. He looks genuinely alarmed by this idea, and doesn't trust Maddox not to cock it up. 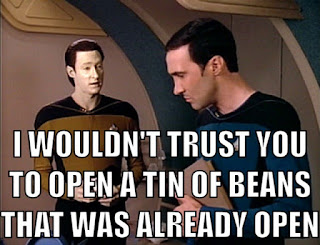 Since he can't simply refuse a reassignment (and an appeal would take too long to be useful, no doubt) Data decides to resign his commission, which Maddox intends to block on the basis that the android is the property of Starfleet. The senior crew hold a goodbye party for Data. He keeps quite a lot of old tat in his room, including a book that was a gift from Picard and a hologram of Tasha. He seems quite embarrassed when asked why he keeps this, and clearly still has feelings for her, even if he can't quite articulate them. He believes that he must protect Soong's dream by staying alive and intact (this will change as the years go by).

Maddox calls Data "it" and doesn't treat him with respect. Louvois calls him a toaster, but comes round eventually. Data is magnanimous enough to agree to work with Maddox in the future, which is pretty damned big of him.

He's never played poker before, and he's not very good at it yet. He's very easy to bluff. He holds the Legion and Medal of Honour and the Star Cross. His brain can hold 800 million bits of data (this isn't actually terribly impressive compared to the human brain, the capacity of which is unknown but estimated to be at least a thousand times more than this). He has an off switch in his arm, which is easily detachable.

The Picard Maneouvre: Picard shuts down Louvois's flirtation straight away and really hasn't much time for her. To begin with he tries to see both sides of the argument for Maddox's work, but soon realises how dangerous this is. He realises how Maddox is refusing to respect Data's rights as a person, and the risk of mass-produced androids becoming a slave caste. He speaks of a whole group of androids being a race - both of these things eventually come to pass in Star Trek: Picard. He successfully forces Maddox to confirm Data's sentience accrding to his own definition. He still values Guinan's counsel and takes it on himself to defend Data, eventually winning the argument and securing his right to choose.

The edited version of the episode available today states that Picard's first posting was on the starship Reliant.

Number One: Louvois assigns Riker as the nextmost senior officer to act as counsel for the prosecution. he immediately refuses, but since this would forfeit the trial and make Data a loser by default, he agrees. He puts in serious work as prosecutor, doing his best to portray Data as an object, but is clearly torn by his loyalty.

Geordi Shore: Geordi doesn't get a lot of screen time but is clearly cut up by Data's resignation. He should have had a chance to defend him in court though.

Lady Bones: She's present at Data's goodbye party and has clearly changed her mind about him. Data has some respect for the doctor.

Hat-tastic: It's Guinan who gets Picard to consider the horrifying ultimate result of Maddox's mission.

Sexy Trek: Philippa Louvois is an old shag of the Captain's from years ago, who still has a thing for him, although he remains pissed off with her for when she prosecuted him with zeal for the loss of the Stargazer. She says he's "still a pompous ass and a damn sexy man."

Cliche count: This is the first appearance of the now traditional Enterprise-D poker game. The players in this episode are Data, Riker, Pulaski, La Forge and O'Brien.

Future History: This is the first mention of the Daystrom Institute, named for Richard Daystrom (see TOS 2-20). It'll be mentioned many times throughout TNG, DS9 and VOY, and finally appear in Picard.

Future Treknology: Maddox has built a positronic net but it's not up to scratch. He plans to continue Soong's work and use Data's brain as a model to create an improved net and thereby build more androids. He says there are negligible risks to Data but no one believes him.

Future Echoes: This episode will have huge repercussions in Star Trek: Picard, with events on Mars happening almost twenty years after this.

Best lines: "Starfleet was founded to seek out new life. Well there it sits - waiting!"

"I'm sick to death of hearing about rights!"

"Pinocchio is broken; its strings have been cut."

The verdict: An exceptional episode, one with real impact and relevance today. While we're nowhere near the point where we'll have to have these discussion about artificial intelligence, the treatment of one group of people as lesser, disposable or a commodity is never far behind. It's vital that this story is told again and again, through whatever metaphor.

Making Riker the prosecutor is contrived, although it leads to some effective scenes. Wouldn't it have made more sense to make Dr. Pulaski the prosecutor if they were set on having a regular character do it? In either case, there's an obvious conflict of interest.

Nonetheless, this episode is a brilliantly written piece of science fiction drama held up by an excellent performance by Patrick Stewart and fine support from Brent Spiner and Jonathan Frakes. One of the all time greats of TNG, it's hardly surprising that it became the basis of Picard. The extended modern edition is particularly worth watching for some nice extra scenes.