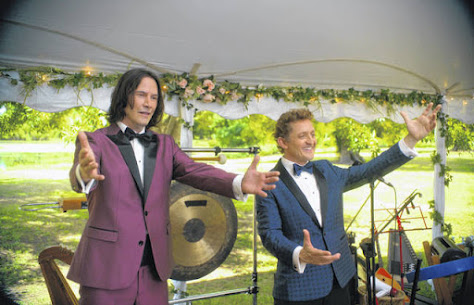 The original two Bill & Ted films are among my favourite go-to feelgood movies. Bogus Journey, in particular, I absolutely love, even though conventional wisdom has it that it's weaker than the first. Well, Excellent Adventure has more George Carlin, but it's not got William Sadler as Death, and the ending of the second film is such a beautifully uplifting crescendo that it cannot help but bring a happy tear to my eye.

So to hear the third film announced after all this time brought both excitement and trepidation. On the one hand, I couldn't wait to see the characters again (fondly remembered animated series and recent Boom! Studios notwithstanding, it's been almost thirty years). On the other, could a new film really capture the glorious late-80s/early-90s slacker magic of the originals, especially since the leads are now well into their fifties.

The solution is a stroke of genius – have Bill and Ted as middle-aged washouts. I always find it kind of embarrassing seeing ageing rockers performing reunion gigs or taking part in the Royal Gala. There's a point at which you just can't recapture your successful youth, and it just looks sad. Which is exactly the story to Bill & Ted Face the Music. While they're ostensibly fighting to save the future of the universe, it's their own lives and futures Bill and Ted are really fighting for. Not only are their wives (recast again) on the verge of leaving them, they risk losing the love of their kids as well. The script was apparently being worked on as long ago as 2010, but the extra ten years makes it all the more effective.

Of course, this film does undercut the ending of Bogus Journey. That movie ended with Bill and Ted having mastered their art, married to the princesses and with Little Bill and Little Ted in tow. The alien scientist Station, their good robot selves and Death himself were part of the band. Wyld Stallyns performed their first triumphant show, broadcast worldwide, kick-starting not only an illustrious career but also peace throughout the universe. To have that ending cut down is galling. No wonder Bill and Ted feel as lost as they do, nearly thirty years on, their careers down the pan and having still not written the song that unites the world. Not only is the utopian future, founded upon their music, under threat, but the paradox is causing all of space, time and reality to collapse. Just to up the stakes.

Normally we'd rely on Rufus to help save the day, but the great George Carlin sadly died twelve years ago. He does have a presence in the film, thanks to a rather touching moment where his hologram appears next to the time-travelling phonebooth as an object of historical interest (with a decent impersonation of his voice to allow some new dialogue). I still think Pam Grier should have played him, but we can't have everything.

Fortunately, Rufus's daughter Kelly (named after Carlin's own daughter, a huge deal in her own right, who makes a quick cameo in the movie) travels back from the 28th century to lend her aid to the Stallyns. It would have been easy to cast a man to play a pastiche of Carlin's Rufus, but Kelly, played by Kristen Schaal, is a different sort of saviour. It also happens that her mother (played by Holland Taylor with imperious arrogance) is the Great Leader, the ruler of the universe, who will stop at nothing to nip the problem in the bud, even if this means killing Bill and Ted to kick off a posthumous hit.

Winter and Reeves are still perfect as Bill and Ted. They were never the world's greatest actors (let's be fair here), but they never had to be to make the pretty shallow characters work, and here they give them just enough new depth to make the shallows all the more loveable. Their own solution to the problem – to travel into their own futures and get the song after they've written it – is as ingeniously stupid as they've ever been. Unfortunately, they have to drop the princesses in the middle of marriage counselling, triggering the final collapse of their relationships. Not only do they have to deal with increasingly warped and bitter versions of their own selves as they travel forwards in time, but Joanna and Elizabeth eventually get hold of the time booth and travel into their own past to try to find a better life themselves. The mission to save their marriages becomes even more important to Bill and Ted than the stability of the space/time continuum. It helps that Elizabeth and Joanna (Erinn Hayes and Jayma Mays, respectively) are given some actual character this time round, and you can't help but root for them as well as they try to find a version of reality where they can be content.

The best thing about the movie, though, is Bill and Ted's daughters. Billie Logan and Thea Preston, aka Little Bill and Little Ted, are the absolute stand-out characters and carry much of the film. Predictably, there were plenty of loud-mouthed idiots on the internet complaining about forced diversity and SJWs and the like, because how dare the creators of the franchise decide to make two characters who were briefly, arguably, presented as male into women? (Anyway, as writers Chris Matheson and Ed Solomon pointed out, the babies in Bogus Journey were girls.) Making the second leading duo of the film women adds some balance (as does giving the princesses some personality), but more importantly, Billie and Thea are brilliant characters. Thea is played by Australian star Samara Weaving, while Billie is played by up-and-coming NB actor Brigitte Lundy-Taylor. They're excellent characters; essentially like their fathers, but smarter, more proactive, and unstoppable in their mission to form the greatest band in history to support their dads' ultimate song. 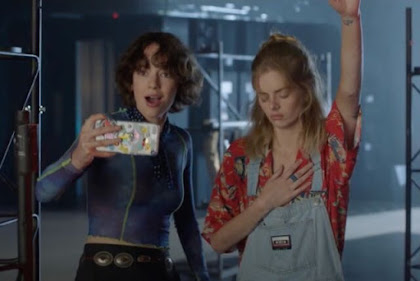 Billie and Thea steal every scene they're in, and add a freshness to a film that could otherwise easily have been nothing more than a nostalgia fest. They're gorgeous, hilarious women who manage to be Bill and Ted perhaps even more than the older Winters and Reeves. Lundy-Taylor in particular is magnetic and somehow manages to completely recreate the Reeves's performance from the originals – she's even perfectly performs his walk – while adding something totally new. The girls make their own trip, backwards through time, recruiting some familiar and not-so-familiar faces from music history. This strand of the movie is the most like the first film, without ever feeling like a retread.

Unfortunately for all concerned, the Great Leader has sent a killer android after Bill and Ted, but he isn't very good and ends up killing pretty much everyone who gets in his way. Dennis Caleb McCoy (for that is his name, and I fear I'm missing some reference there) is a weird character. He's brilliantly performed by Anthony Carrigan, but he seems to belong to a different film. In the end, though, this just makes the neurotic robot seem more of an outsider, and he becomes a surprisingly sympathetic character. Multiple deaths by laser bolt naturally leads to everyone being sucked down to Hell, where eventually the Stallyns reform, after Bill and Ted make up with Death, who's been sulking since they kicked him out of the band over a law suit and forty-minute bass solos. The only character really missing from the band is Station, but Kid Cudi (as himself) oddly fills the genius otherworldly scientist role.

The entire film is visually astonishing, but the finale is spectacular. The climax to the story is both utterly predictable (the reveal of the great song and its performers is obvious from very early on) and truly satisfying. It's not quite the feel-good ending of Bogus Journey, but it's not far off, and yes, I shed a little tear of nostalgia-tinged happiness. Bill & Ted Face the Music doesn't quite hit the highs of its predecessors, but it's still a most excellent adventure.