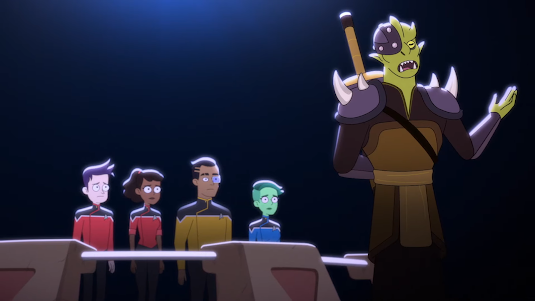 This is a series that relies a lot on in-jokes, but for the most part, they've been balanced out by character moments and adventure. The last couple of episodes have been almost too full of plot, and now we have an episode that has multiple embedded plots, and yet still seems like an excuse for packing in as many references to old Trek as possible . The result is certainly pretty funny – I honestly laughed aloud at some of the sillier references – but it's ultimately a bit unsatisfying.

The entire episode is built around a pseudo-Klingon court scene, heavily riffing off Kirk and McCoy's trial in Star Trek VI, but with extra unpleasant punishments in store, mainly involving eels. An alien named Klar (a fine performance by veteran actor Kurtwood Smith) has the Lower Deckers in the dock, demanding they give accounts of a series of seemingly unrelated events, while their superiors are held in stasis.

The result is each of the core characters giving us a brief flashback to a silly mini-adventure. They all revolve around the Romulan Neutral Zone in some fashion, and any one of them could have probably been expanded to a full episode's plot. The best are easily Rutherford and Tendi's stories, which see the two characters each take on a death-defying mission with huge swathes of material missing. In Rutherford's case, this is because he was unwisely ordered to install a software update, causing him to reboot periodically in the midst of the action, each time coming to in a different, ever more outlandish scenario. Tendi is mistaken for "the Cleaner" in a top secret mission with Ransom, but any potential embarrassment is avoided when she gets to seriously kick ass.

Mariner's story isn't as exciting, but they're still pretty diverting and hint at bigger stories to tell. In her telling, Boimler manages to be completely out-of-his-depth in a bridge assignment when the ship faces some alien insectoids, called the Clickets. That said, neither Mariner nor Captain Freeman come out too well in that scenario either. Boimler rounds off the testimonies by pointing out that just because they seem incompetent and have no idea what's going on, that doesn't mean they're not Starfleet material. He then gives a rundown of various times the bridge crew were completely lost, including the much-anticipated appearance of Q on the Cerritos, with John de Lancie himself making a special guest appearance as the superbeing. It's a joy to hear his voice, but it's a cameo with little point. The little asides of Ransom accidentally dating a salt vampire, or Dr. T'ana thinking she's stepped into a parallel universe when she boarded the wrong ship are a lot funnier.

In the end, it turns out it's not a trial after all, and the punchline is... really not very satisfying. Klar's real story ties all the little plots together, but the jokes it's too arbitrary a reveal to work dramatically and too lame a joke to be funny. So the episode boils down to a lot of references and side gags for fans hung on a flimsy story, while the interesting stuff all happened just before they got there.

Boimler and Mariner argue over who's the best genetically-enhanced supervillain, Roga Danar or Khan Noonien Singh, and the fact that only the biggest TNG fans will even have heard of Roga Danar illustrates how much they're aiming this episode at the hardcore fans. He was the rogue trooper from the third season TNG episode "The Hunted," which is pretty good, actually.

The line about there being nothing to do on Earth "except drink wine and hang out at vintners and soul food restaurants" is a very funny pop at what our favourite bald captains do on their down time. Q seems equally fed up at Picard only wanting to make wine these days... except that this is 2380, so Jean-Luc's still captaining the Enterprise-E. Maybe this version of Q has nipped back in time from the era of Star Trek: Picard?

Rutherford's covert mission includes a huge bunch of classic ships, starting on a Vulcan shuttle, entering a ship museum displaying a Ferengi shuttle, a Jem'Hadar fighter, a Klingon Battlecruiser, the T'Plana-Hath from First Contact and a Tholian webspinner, and the classic 23rd century Romulan Bird-of-Prey that they then steal. There's some very nice footage of Romulan Warbirds to follow, as well.

Rutherford is forced to do one of Uhura's, um, "alluring" fan dances, referencing one of the more embarrassing moments from Star Trek V.

Oh, and after recently learning that Boimler's full first name is Bradward, we find out that Rutherford's is Samanthan.

The missus LOL'd at Chief Engineer Philips's line, "Tasha, no! The garbage bag's behind you!" a decent summing up of the first season TNG episode "Skin of Evil."

Lots of TOS monster fun this week, as we not only see a salt vampire (not extinct, it turns out, whatever "The Man Trap" might have us believe) but a whole wedding party of Gorn.

Possibly a reference, maybe just a coincidence, but the Clickets, huge arthropods who get very angry when people are politely grateful, reminded me a lot of the Pa'uyk, belligerent arachnids from W. R. Thompson's 1996 TNG novel Infiltrator.

Trek stars: As well as John de Lancie returning as Q, we have two other Trek alumni returning. Kurtwood Smith previously played Annorax in VOY: "Year of Hell," Thrax in DS9: "Things Past," and the Federation President in Star Trek VI. Kenneth Mitchell plays several roles here, including the Clicket captain, but was previously Kol, Kol-Sha and Tenavik in Star Trek: Discovery.