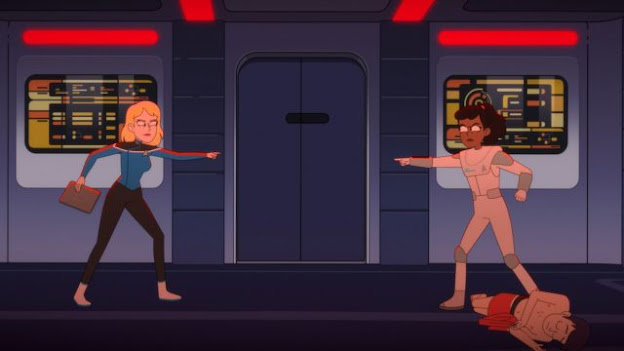 The fifth episode of the series is, for me, the strongest so far, balancing three distinct story threads during its short runtime and getting away with it. This is a very funny episode, that balances the Trek-references, slapstick, character humour and story drama very well.

Everything revolves around the Cerritos' rendezvous with the USS Vancouver, a clearly more advanced and up-to-date starship. (Mariner can't see the difference, but it looks like the next step up from the Cerritos on the design chain, rather like the Excelsior-class compared to the Constitution.)

The A-plot deals with Boimler's new girlfriend Lt. Barbara Brinson, science officer on the Vancouver. She's fallen inexplicably in love with the young ensign, who will not shut up about her and how they're a thing. Mariner can't accept how Boimler is batting so far out of his league, and comes to the conclusion that Brinson's some nightmarish threat in disguise with horrifying plans for Brad. This is a deeply paranoid side to Mariner we haven't seen before, but it stems from a terrible incident in her past when she was stationed on the USS Quito: we get a fun flashback where her friend's boyfriend turns into a shapeshifting monster and eats her, so it's understandable she's got some hang-ups.

For his part, Boimler realises he's punching above his weight, and is sent into jealousy-mode when Brinson is hanging out with Jet, the "second-coolest guy" on the Cerritos, who is, of course, tall, buff and handsome. Boimler tries to impress his coolness on Brinson in increasingly desperate ways, while Mariner tries to gain evidence for whatever kind of monster she is, leading to a series of farcical scenes throughout the episode.

Meanwhile, T'endi and Rutherford are lusting after the superior technology on the Vancouver. There's a fun scene where they geek out over a new kind of tricorder-like instrument, the T-88. They get the opportunity to engage in a little healthy competition to see who will win one of the devices – in reality, by gaining a transfer to the Vancouver. In a nice touch, they draw, earning them both a transfer, but they're not sure they're ready to move away from the Cerritos, especially when it turns out that the transferring officer is desperate to get off the more advanced ship because of the endless high concept missions. It's a fair point; life on a ship like the Enterprise or Vancouver, with its weekly life-threatening scenarios, would be unbearably stressful for most people.

Meanwhile again, Captain Freeman and Commander Ransom must work with the natives of the Mixtus system to try to solve the problem of an errant moon, which is due to collapse and rain down fiery death onto Mixtus Three. The simple solution is to implode the moon, except that the various Mixtan factions all have reasons to stand against this, be they economic, religious, or sheer paranoia (the whole things a hoax to control our minds! Sound familiar?) This requires some serious diplomacy from Freeman, who is well up to the task, but she is then stymied when it turns out that saving Mixtus Three will doom Mixtus Two. It's great to see the captain really showing us what she's capable of, after previous episodes have made her look pretty incompetent. She's great here, never backing down from her impossible problem, and though the final solution is a jokey one, the storyline itself shows us her worth as a commander.

Everything comes to a head as each storyline is resolved at the episode's close. I can't help but feel sorry for Boimler, who loses his girl after all. It'd have been nice for the geeky guy to get the girl for real – after all, there's more than a few of us geeky guys watching. As fun as the main thread is, I wonder if there was a better way to approach it. Brinson turns out to be completely human, but it could have been wonderful if she wasn't, but Brad just didn't care. Mariner could have done her investigating behind her back, and dramatically revealed to him proof that Brinson was a shapeshifting alien, just for Boimler to go, "Yeah, I know. So what?" Still, the storyline shows the deep friendship Mariner has for Boimler, and there's just a chance it'll develop into something more as time goes on.

A very good episode with a great guest spot by Community's Gillian Jacobs as Barb Brinson.

Things Mariner accuses Brinson of being: a salt succubus, a Suliban, a rogue hologram, a shapeshifter, a reptoid, a surgically altered Cardassian or Romulan spy, a transporter clone and a parasite.

The USS Vancouver is a Parliament-class starship. Mariner's old posting, the USS Quito, is an Olympic-class ship, like the USS Pasteur seen in TNG: "All Good Things." We see it docked with Deep Space Nine, the first appearance of the station since DS9: "What You Leave Behind."

There's a bit of confusion about the Mariner's background as seen in the flashback. She and her shipmates talk about the events of TNG: "Descent" like it was recent, which would place the flashback in 2370. This would mean Mariner has been in Starfleet for at least ten years, which isn't impossible, given her ability to get herself promoted and demoted frequently. However, she and her shipmates are wearing the grey-shouldered uniforms that first appeared in Star Trek: First Contact, meaning the scene can take place no earlier than 2373. On the other hand, Mariner probably isn't the most reliable of narrators when it comes to details.

As well as the Suliban, Trip Tucker gets a name check. I always like it when Enterprise gets a reference. This is the second post-Enterprise character reference, after Captain Archer was briefly mentioned in Star Trek: Discovery.

There's a Phylosian (from TAS: "The Infinite Vulcan") serving on the Cerritos.

Best line: "It's so stressful. It's so epic. It's all, 'Tow this space station and calibrate the Dyson sphere. Go back in time and kill the guy that was worse than Hitler!"