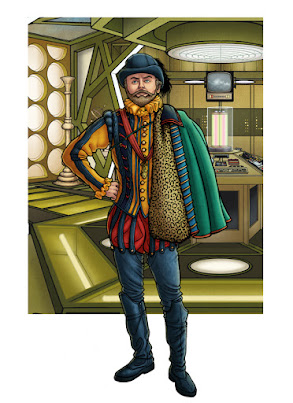 Obverse Books hae announced that their new unofficial Doctor Who anthology Forgotten Lives is now available for pre-order. I'm sorry to say I wasn't involved in this - god, I wish I had been - but it looks like something really exciting and I'll definitely be reviewing it. Plus, all the profits to Alzheimers charities which is an excellent cause.

Forgotten Lives features stories about the mysterious "Morbius Doctors," the eight faces seen in the mind battle during the Tom Baker serial The Brain of Morbius. During that scene, the two Time Lords fought with their minds, and on a monitor we first saw the face of Morbius, followed by the Doctor's. Then, as Morbius forced him "back... back to your very beginnings!" the images went through Jon Pertwee, Patrick Troughton and William Hartnell... and then further, to show four other men in various period costumes. These were all backroon boys including writers and directors, and while it's possible to interpret them as faces of Morbius's earlier incarnations, it takes a willful misreading of the scene to do that. They were always meant to be earlier Doctors, the people responsible for the scene (who put their own pictures up) said as much. But, this is very difficult to reconcile with the rest of the series, and it's vague enough to explain away as Morbius.

But some of us always believed these mysterious men were Doctors, and finally, this year in "The Timeless Children," we got seeming confirmation that these were earlier faces of the Doctor before they got their memories wiped. I think this project started before that revelation, but it's a handy back-up and makes this more relevant than it otherwise would have been.

The authors include Lance Parkin (who had to be included, as the Morbius Doctor's novel champion), Simon Bucher-Jones, Philip Purser-Hallard and more excellent authors. Plus, Paul Hanley has made a project of illustrating the mysterious Doctors, taking the glimpses we saw on screen and beyond and creating whole looks for them to tie into the stories. You can see the pictures and read about the process on his Patreon, which includes a free blog. I adore these new pictures, each one giving each new Doctor their own personality and hinted at backstory. The Gallaccio Doctor has a Dr. Doolittle-esque style to him; the Camfield Doctor is a romantic adventurer all in purple; the Hincliffe Doctor (always my favourite) is a glam rock Cavalier; the Barry Doctor is a mix of Jimi Hendrix and Elizabethan courtier; the Holmes Doctor is an Enlightenment-era swashbuckler with a gleam in his eye; the Banks Stewart Doctor looks like some kind of Renaissance natural philosopher; the C. Baker Doctor is a Georgian astronaut; and the Harper Doctor is such an amazing story of deduction, creativity and thrown expectations that you should really just go and see for yourselves.

And all that's "just" the artwork. Imagine what the stories are like! Forgotten Lives is available to order from Obverse Books for £16.95 (plus shipping).