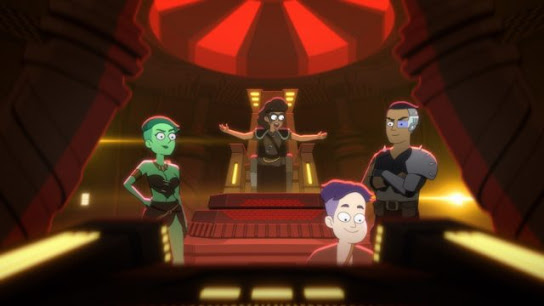 "Screw the Prime Directive!" I've waited a long time to hear a Trek character say those words. The penultimate episode of Lower Decks' debut season hits the ground running, with Mariner busted by Captain Freeman for overthrowing a twisted society where a race of rat people rules over and eats a race of lizard people. Freeman's angry at her daughter for violating the Prime Directive, while Mariner isn't going to let something like that stop her from saving people from being eaten. It's a pretty vicious swipe at Discovery's Kaminar storyline, where Starfleet was reluctant to get involved in the Ba'ul eating the Kelpiens for generations.

Naturally, this leads to a fight between the mother-daughter team, so Freeman books Mariner in for therapy. "It's the eighties, dude, we don't have psychological problems!" It looks like this episode is going to town on TNG. It weirdly hadn't occurred to me that setting this series in the 2380s might be a nod to TNG's beginnings. The 1980s were the only decade when a series would put a therapist on the bridge of a starship. It's particularly odd considering Roddenberry's view that humans in the 24th century would be paragons of self-awareness and would have no interpersonal conflicts. Frankly, the Great Bird would be horrified by this episode and that's no bad thing. Even a comedy series gets that interpersonal conflict is essential to drama.

But that's just the opening teaser. The main episode is a scathing but ultimately affectionate parody of the Trek movies. Boimler, you see, has developed a holodeck simulation of the ship and its crew (the ethics of this, particularly his breaking into private logs, is briefly touched upon), in order to prepare for a job interview with the captain. Mariner commandeers it and creates her own Lower Decks movie. Right from the get-go, it's an affectionate pastiche of the Trek movies from The Motion Picture to Beyond, pushing at the fourth wall the whole time. Boimler wants to get on with his interview prep, but Mariner, Tendi and Rutherford all have roles as badass space pirates who attack the Cerritos.

It's an episode that an anyone who's enjoyed a Trek film can get something from, but if you're a dyed-in-the-wool fan it really sings. The music that opens the film is an appropriately cinematic upgrade to the usual theme, leading into a long bit of starship porn that references Kirk and Scott's even longer Enterprise flyby from TMP. From there it's all out, poking fun at the lensflare obsession on the Abrams movies to the tendency of the Enterprise to crash land or be otherwise gutted in the films. It even ends with a very silly use of the characters' signatures that homages the cast's autographs at the end of Star Trek VI. But the line that really got me was Mariner calling Boimler "kind of a Xon," which is a deep cut reference if ever there was one. I roared with laughter, but no one else got it.

Mariner gets violent with the crew very quickly, and my, she's got issues, but it's not until she faces down her own holographic alter ego that she gets to work some of these issues out. I really think this is a great therapy idea – I feel that a good punch-up with myself would let me work out all sorts of stuff. Mariner actually ends the episode a more in control, better developed person than she started. I really enjoyed both Rutherford and Tendi's stories too. Rutherford, an altogether more positive character than Mariner, uses the simulation to figure out his issues too – but his big deal is his burning admiration for Lt. Cmdr Billups. It's a beautiful bromance – can't Sam just switch to "emotional honesty" mode and be truthful to his boss?

I loved Tendi's turn as an Orion pirate (and there'll be a fair bit of fan art about that outfit before long, I'd wager), but I really love that she also found it really problematic. We've had Orion characters in Starfleet in the Abrams movies, but Lower Decks is the first prime timeline production to do that. Other than Tendi, the only positive Orion character on TV must be Devna from TAS. The dialogue makes light of it, but it's a genuine problem for Tendi that everyone thinks of Orions as pirates and slavers. We might actually see the Orions get some of the rehabilitation the Ferengi received on DS9 should this series continue down this route.

The episode ends with Boimler finding out the big secret about Freeman and Mariner from the holographic captain, leading in to the series finale. It's quite right that this smaller scale series focuses on a personal crisis rather than a galactic one as its endgame. A cracking episode that's hopefully leading to a successful finale.

"It's a movie! You can do all sorts of beaming stuff in a movie!"

"When you get to Hell, tell the Pah-wraiths that Shaxs sent ya – special delivery straight from Bajor."

"This isn't my first overpowered space lord, and it won't be my last."