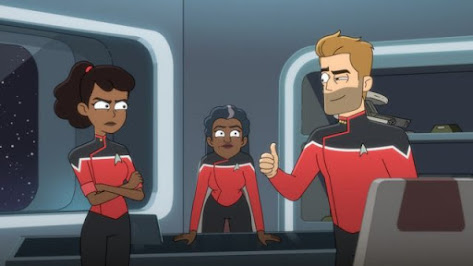 Well, I called it. SPOILERS from here on out, so...

But yes, I totally called it. With all the namedropping of the USS Titan earlier in the season, I just knew that Riker and his shiny new ship would show up, especially given Jonathan Frakes's longrunning association with the franchise in its various forms. I was not disappointed, with the Titan storming to the rescue of the Cerritos to the stirring tones of the TNG theme tune, along with Marina Sirtis as Mrs Deanna Troi-Riker. It's the least surprising but most satisfying way to end the season.

Before all that, though, Lower Decks gives us an incredibly strong season finale. While I was pleased before that the writers were going with a personal crisis to end the run – Boimler finding out Mariner is the captain's daughter – this is balanced out by both an action-packed catastrophic attack and a philosophical debate on the nature of Starfleet's interaction with other cultures. Again, while occasionally this series can get a little too busy, it's really impressive just how much the showrunners can cover in a half-hour episode.

The episode uses its cold open very effectively, pitching the Cerritos to the planet Beta III, a callback all the way to 1967's TOS episode "Return of the Archons." It turns out that the inhabitants of Beta III have reverted to worshipping their god-computer Landru, although they've at least not gone back to their Purge-like Red Hour. This cleverly sets up a running thread of how Starfleet, in spite of their non-interference directive, actually does interfere, but just enough to solve the problem today. What happens once they've gone on their way, to the planets and cultures they left behind?

At the same time, Mariner and Boimler are breaching protocol by beaming down to Beta III without permission, leading to a hilarious moment when Boimler accidentally broadcasts their conversation to the entire ship. I've often wondered how the communicators know who's supposed to receive the transmissions, other than dramatic necessity, and it's surprising this hasn't happened before. (Come on, if Reg Barclay hasn't done that at least once, I'll eat my Remco Spock Helmet.) Now the entire crew knows Mariner is Captain Freeman's daughter, leading to a complete change in attitude towards her.

The resulting storyline ties in both Boimler and Mariner's attitudes to advancement, deals with the mother-daughter team making peace with their two very different approaches, and takes Starfleet to task for not following up on its first contacts. The big joke of the series – that the Cerritos only goes on follow-up missions – is shown to be the essential message. Starfleet has a responsibility to follow-up its interventions in the greater galaxy.

The story addresses two one-off TNG species, to see how things can turn out differently. Tendi's storyline focuses on her welcoming new crewmember Peanut Hamper aboard. She's an exocomp, the robot race who achieved sentience in TNG: "Quality of Life." Starfleet has taken its responsibilities seriously with the exocomps (who were admittedly created by a Federation scientist), and now they are free to live as please and join Starfleet. Peanut Hamper turns out to be a bit of an ass, but there we go, at least she has the freedom to be an ass, and let's be fair, if she was a model officer they wouldn't have sent her to the Cerritos. 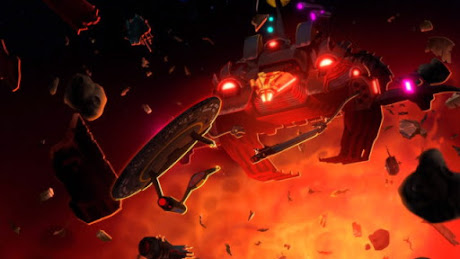 On the other hand, the Cerritos is drawn into a trap by none other than the Pakleds, the notoriously rubbish tricksters from TNG: "Samaritan Snare," who have spent the intervening decade-and-a-half perfecting their technique of capturing and cannibalising other races' ships. The characters themselves admit that they consider the Pakleds a bit of a joke, and this refusal to take them seriously has meant they've been happily preying on space traffic and have now amassed a deadly fleet of cobbled-together starships. It's totally fitting that Lower Decks ends its first season with such a laughable villain as big bad, but makes them into a genuinely deadly threat. In the frenetic climax to the series, the Cerritos crew are forced to fight to the death, with both Rutherford and Shaxs showing what they're made of. Both of them suffer heartbreaking fates, but at least there's some hope for Rutherford. Bringing Badgey back is a nice touch, part of how the season has tied together, although I do hope we've seen the last of him now – joke characters become less funny each time you seen them.

As a finale, "No Small Parts" absolutely nails it, combining action, pathos, character development, big laughs, deep cut references and a scathing critique of the parent shows. Ending with Captain Freeman and Mariner mending their relationship and beginning their own, personal mission, season one has been a great success as a show for Trek diehards, although it's probably pretty impenetrable for more casual fans or newcomers. As a dyed-in-the-wool Trekkie, though, I can't wait for season two.

The USS Titan NCC-80102 makes its canon debut, with the fan design that has graced the covers of the Star Trek: Titan novel series making it onto screen at last. In universe, the Rikers have been married and commanding the Titan for only a year, but we've been waiting to see the Titan onscreen since 2002.


Jonathan Frakes has now appeared as Will Riker in a remarkable number of Star Trek series. From his regular appearance on TNG, he's since had guest spots on Voyager, Picard, Enterprise and now Lower Decks. In all but his Voyager appearance he appeared alongside Marina Sirtis as Deanna Troi, although she made two apperances in that series separately. Still, Frakes pips her with his appearance as Will's transporter duplicate Thomas Riker in DS9. I loved how Riker is still watching holodeck recreations of the Enterprise NX-01 crew, as in the Enterprise series finale, the dreadful "These are the Voyages." "Those guys had a long road, getting from there to here."


Mariner's massive stash of contraband includes a tribble ("for personal use"?!), a Klingon bat'leth, mek'leth and mace, a Ligonian gauntlet (from the terrible TNG episode, "Code of Honour"), a Remco toy "Spock helmet" from the 1970s and a booze stash including Romulan ale, Saurian brandy and Klingon bloodwine.


Riker's first officer is a Saurian, of the same design as Linus in Discovery.


The Titan crew are still wearing the grey uniforms introduced in First Contact, so perhaps the more colourful ones from this series are unique to California-class vessels? Of course, the real reason is that having everyone in grey wouldn't be very visually striking on a cartoon.


Commander Ransom refers to the 2260s as the "TOS era" – TOS standing for "Those Old Scientists." He has a PADD which shows an image of Kirk and Spock, taken from the 1970s Animated Series.


Lt. Levy on the Cerritos is a conspiracy theorist nutjob, who thinks the Battle of Wolf 359 was an inside-job and that "Changelings aren't real and the Dominion War didn't happen." I'm sure he'd refuse to wear a mask during a plague as well.