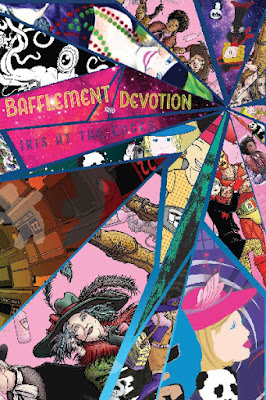 Stories by Iris creator Paul Magrs include "Bafflement & Devotion" itself, the tete-a-tete between Iris and the Eighth Doctor originally published in Doctor Who Magazine; "In the Sixties," originally printed in Walking in Eternity; "Being an Extract from The Amazing Adventures of Iris Wildthyme on Neptune," originally printed in Tales of the Solar System; "An Unearthly Palaver," originally written for the "G'Day for the Doctor" convention; "Hospitality, from Iris: Abroad; "Entertaining Mr. O" from Perfect Timing and "It's Raining Again," with Stewart Sheargold, originally from Perfect Timing 2.

Stories by other ne'er-do-wells include "Iris Explains" by Lance Parkin, featuring the Eighth Doctor and originally included in Missing Pieces; "No Place Like Home" by Stuart Douglas, originally printed in Shelf Life; "Iris Wildthyme and the Spider from Magrs," by Alan Taylor, and "Cabinet of Changes" by Philip Purser-Hallard, originally in Walking in Eternity; "Deleted Scene from The Key Lime Pie 2 Time" by Cody Schell from a bonus ebook for Iris: Abroad; and "When Iris Met Tommy" by Stuart Douglas, from A Second Target for Tommy.

Other stories have never been in print before, including "Faking It" by Philip Marsh, the mysteriously unattributed "Lost, Presumably Illogically Ignored," and my own Ninth Doctor and Iris story, "A World Apart."

You can order the paperback for £16.95 here, but I don't know how long it will be available so best get on it, chuck.