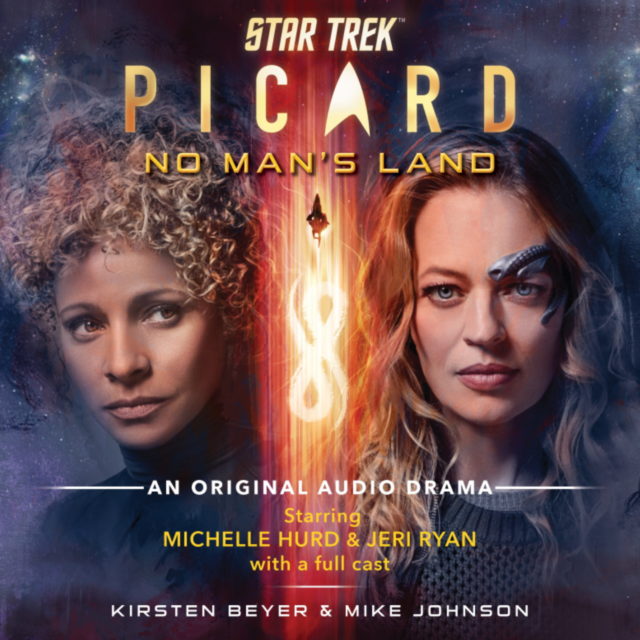 Whetting the appetite for Picard's imminent second season, No Man's Land is a rare foray by Trek into the medium of the full-cast audio drama. Given that other franchises, most notably Doctor Who, have created huge and successful lines in audio, and that Trek audiobooks (as in readings of prose rather than actual audioplays) are an established product, it's odd that there have been so few of these over the years.

Given how well it works, No Man's Land could very well kick off a whole new direction for Trek fiction. Picard and Discovery writer, and Pocket Books author Kirsten Beyer joins with comics writer Mike Johnson to work in this new medium. At just over an hour-and-a-half long, it's nicely paced, and a good deal happens, with plenty of audio-only action and tension. First and foremost, though, this is a personal drama, focusing on character relationships, primarily the two leads. Michelle Hurd and Jeri Ryan star as Raffi Musiker and Seven of Nine respectively, picking up their screen roles and building on them. Much of this is to do with their tenuous new romance, teased at the end of the last episode of Picard's first season.

While it was good to see a same-sex romance on Trek, especially between two older women (a rarity on television still), it did seem to come out of nowhere, especially as Raffi and Seven hadn't interacted all that much on screen before then. No Man's Land redresses the balance, exploring their feelings for each other and convincingly portraying the two women as nervously falling for each other. It's no whirlwind affair; both Raffi and Seven are damaged by their previous experiences and are cautious in making new connections. Much of Raffi's personal background was hinted at on screen, and explored in more detail in the Picard novel The Last Best Hope. Seven's post-Voyager life, on the other hand, remains quite mysterious, and while the audio sketches in some details, there's plenty of room left for the TV series to explore more without worrying about contradiction.

The lack of visuals really hammers home just how different Ryan's performance is to her Voyager days. She simply doesn't sound the same after twenty-plus years, and the older, more human but even more guarded Seven is a distinctly different, yet recognisable, version of the character. Aside from exploring her reluctant attitude to relationships, the story delves into her history with the Fenris Rangers, the still virtually unknown power that has taken over some of the Romulan Empire's former sphere of influence. While they remain quite mysterious after this, the impression we get is of a loose alliance of various life forms trying to keep some sort of order in a dangerous region of space.

The plot concerns the Rangers bringing Seven back into service to help them track down a figure from her past, who, inexplicably, appears on galactic records going back centuries. A brutal Romulan warlord, one of many vying for power in the region, is stopping at nothing to discover his secret, and the Rangers are trying to prevent him gaining more power and destabilising the quadrant further. We're introduced to some fun characters in the Rangers' employ, including Deet, who comes across as quite a Star Wars-style character with his peculiar voice and language. The authors generally resist the urge to have characters over-describe what they're seeing – a common mistake in audio – which pleasantly leaves the alien characters' appearances up to the listeners imagination.

In spite of a strong performance by the remaining cast, this is solidly Seven and Raffi's story, and the plot exists to service the emotional storyline as the two women work out what it is they want from life and each other. If there's a complaint, it's that the music is sometimes intrusive, but largely the sound design works well and helps make the production recognisably Star Trek. While it's not essential listening, it's an enjoyable and satisfying story that is, fundamentally, about love.