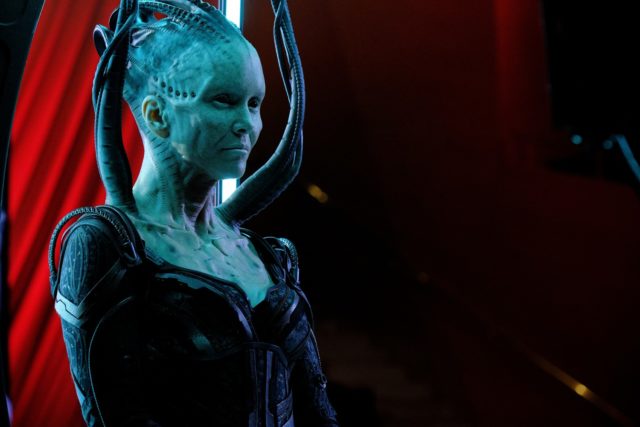 Picard storms ahead with another belter of an episode that barely gives the viewer a chance to take in what's happening. The episode leaves you breathless, but under the excitement and strong performances, it's not as solid as it appears.

Resolving last week's cliffhanger by barging us into a different reality altogether, “Penance” acts like a second introduction to the season that, on the face of it, has little to do with what went before. “The Star Gazer” set us up with the characters in a new dynamic, and with a mystery surrounding the Borg's strange new behaviour, before essentially blowing it all up and starting over with a new story about Q and his interference in the timeline.

Q's scene with Picard is a highlight of the episode. Stewart and de Lancie have the same great antagonistic chemistry they had back in the TNG days, but overlaid with an angrier, more impatient drive, made fierier by the fact that the streaming platform doesn't need to watch its language for primetime. “I don't have time for your bullshit!” snarls Picard at Q, and you feel him. It's two old men lashing out at each other after years of furious history. Picard insists that Q has gone mad, but perhaps he's just lost his patience as well – who knows what bizarre pressures are playing on him?

This new reality, not a parallel universe like the Mirror Universe but an altered timeline, is well-realised, a dark, fascist state where humanity rules with cruelty and brutality. Some of the details are chilling – First Contact Day replaced by Eradication Day, famous aliens slain by the ruthless General Picard, Romulans as slaves and no ban on synthetic servants – but others are harder to understand. After introducing the Stargazer, Rios is now captain of La Sirena again, now a warship for the Confederation of Earth. Annika Hansen is the President of Earth, never having been assimilated by the Borg and changed into Seven of Nine. It's a bit too neat.

Of course, there's the question. Is this really an altered timeline, or some huge fabrication of Q's? On the other hand, given Q's apparent insanity, is something else going on? Has something else changed history in 2024 (only two years away from our present, but also notably the year of the crucial turning point of the Bell Riots in Trek lore)? If that's the case, Q must be pulling strings somewhere to have put everyone (except the unfortunate Elnor) in positions of power that allow them to escape and travel back.

The bigger question, though, is: just how is this different from the Mirror Universe? Aside from Q pointing out it's not an altered rather than alternative reality, this is the Mirror Universe in all but the details. The Confederation instead of the Empire, Nazi-esque black instead of imperial gold. In the Mirror Universe humanity was overthrown by its subject races, while here its still in power and ready to wipe out Vulcan and execute the last of the Borg. Really, though, that's just pushing things forward by a century or so. We still have versions of the regular characters, however unlikely that would be after centuries of divergence, but twisted to become utter bastards. Why not just make it the Mirror Universe and be done with it if you're going to be that clichéd?

Still, it's hard to worry too much about that when it leads to such a gripping thriller as this. Where this works, while the Mirror Universe episodes of Discovery didn't, is that it keeps things moving and focuses on the “real” characters instead of mincing supervillains. Stewart is impressive, of course, convincingly frightening when he pretends to be the cruel General Picard. The most effective part of the episode, though, is President Hansen waking up, with Jeri Ryan beautifully portraying the slow realisation that she is no longer Borg, testing her reality to make sure she's not dreaming it. It's a shame the trailers spoilt the reveal, because it's a wonderful moment when we finally see she has no implants.

On the Borg side of things, Annie Wersching's new iteration of the Queen is also a triumph. Whereas Alice Krige played her as oily and creepily sexual, and Susanna Thompson with a sort of twisted maternal instinct, Wersching's Queen is the most inhuman, twitching and insectoid and more concerned at the change in time than her own imprisonment. The idea of forming an uneasy alliance with the Borg Queen as she's the only one with the brains to calculate the trip back in time is a brilliant one. Making these scenes even better is Alison Pill as the entirely out-of-her-depth Dr. Jurati. Agnes obviously never got parallel universe training and is terrible at undercover work, but watching her wing it is hilarious.

As fun as it all is, I'm glad that it looks like we're on our way back to the past in the next instalment. Just like the Mirror Universe proper, this new evil empire could outstay its welcome quickly. I'm more interested in seeing how all this ties together than spending time in fascist central.

General Picard keeps the skulls of his most high-profile vanquished foes on stands in his trophy room. They include Gul Dukat, General Martok, Ambassador Sarek, an unidentified Ferengi (but probably the Grand Nagus, given the staff included), a Borg and uncertain reptilian species (update - it's a Saurian!)

Brilliantly, we learn that the Ferengi have bones in their ears.

General Sisko is namechecked. I would have loved just a quick cameo from Avery Brooks, if only to punch Q in the face again.

The Queen says Annika was assimilated in 2350. That was actually the year of her birth, and she was assimilated when she was six, so in 2356 or '57. Still, the Queen was having an off day.

Apparently, the Queen can hear her counterparts in other realities through higher dimensions.

The Magistrate/First Husband is played by Jon Jon Briones, the father of Isa Briones who plays Soji, which may well end up being significant (or not).

Picard even has a synthetic body in this reality, as unlikely as that seems, thanks to a nasty altercation with Dukat.