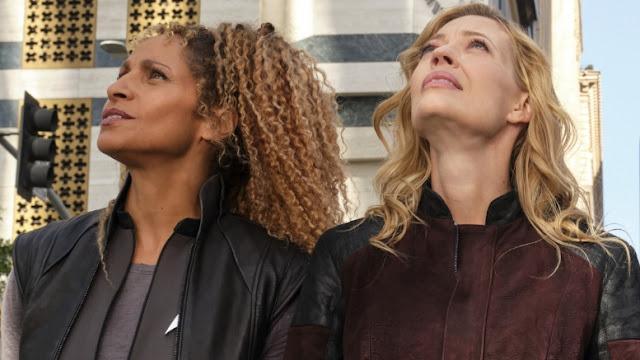 Another solid episode which pushes the story onto what seems to be its main trajectory – setting the path of history right back in the 21t century. After a gripping (and pretty bloodthirsty) intro, La Sirena is catapulted back in time in a classic slingshot round the sun, just like in the good old days before Red Angels and tachyonic subspace rifts. It's not as trippy as The Voyage Home, but it's still a pretty cool sequence as the ship heads back in time under the Borg Queen's control.

Time travel episode are, of course, common as muck in Star Trek, and trips back in time to roughly contemporary settings are nothing new either. It's an obvious idea, of course, letting the characters comment on our way of life directly, but Trek has been running so long now that the present is catching up with the future. DS9's classic two-parter “Past Tense” was set in San Francisco in 2024, just a stone's throw from LA. There are hints towards it in the rundown homeless area that Raffi materialises in, and plenty of commentary on how we live in a society on the brink of collapse.

Raffi has a rough episode all through, first seeing Elnor die and then being thrown into, from her perspective, a primitive society. And she's understandably furious at all this, especially as Picard prioritised the Queen's survival over Elnor's. Seven fares better in the 21st century, suddenly “liked” by people she meets instead of being met with fear or awe. Seemingly because she no longer has Borg bits on her face, she's not threatening, by I wonder if she's actually different in this timeline; if not having her implants has changed her physiologically and mentally.

Seeing Raffi and Seven doing the couple-y thing is fun, of course, and aside from some odd lines (“You and 2024 should get a room,”) they have great chemistry in this episode. Among the storylines in contemporary America, though, it was Rios's plotline that I enjoyed the most. Having Chris, a Hispanic man who commands a starship, suddenly thrown into the world of immigration raids and back alley medicine illustrates the brutality and injustice of our society more effectively than having Raffi pass judgment on the homelessness crisis and beat up a mugger. Sol Rodriguez is a great addition to the cast as Teresa. She has excellent chemistry with Santiago Cabrera and will no doubt be our present day point of contact for the story. More of an Edith Keeler than a Rain Robinson though...

It's interesting that the Queen remains as a major character in the series. I was expecting them to just leave her in her self-induced coma. Wersching's Queen, now that she has her marbles back, seems more like Krige's than before, manipulative and insidious, but has a sassy arrogance that's all her own. Alison Pill gives her best performance ever as Dr. Jurati, as she very inadvisably links with the Queen to try to kickstart her and get data off her. There's definitely a lot more to come from this strange pairing. Really, the only character who doesn't come off well here is Picard, who's perhaps proving too single-minded and inflexible for his crew. I'm wondering just what sort of test Q is running him through.

One more niggling element is the inconsistent attitude to their presence in the past. They worry about “butterflies” but simply being present on Earth in their own past is inevitably changing events. I'll be frankly surprised if it doesn't turn out that Picard and co's interference isn't the very thing that sends history down the wrong path. At least Agnes is thinking about causal loops, even if no one else is.

It's a great episode, the pacing settling down a little since the frenetic opening episodes. The direction, by time travel sci-fi veteran (and huge Trek fan) Lea Thompson and strong performances by the cast make this is a gripping instalment.