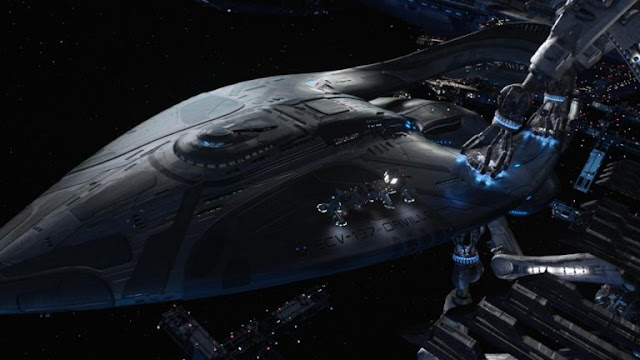 Contains major spoilers for the opening episode of The Orville season three.

The Orville has, after much delay, returned to our screens for its third season, now sporting a nifty subtitle, New Horizons. During its three years away, the series has jumped from Fox to Hulu (available simultaneously on Disney Plus in many territories outside the US), and it has not been time wasted. Seth MacFarlane has reworked his show, bringing it further in line with what, I imagine, was his original vision of a bespoke version of Star Trek.

When it first started, The Orville was an outright comedy, a Trek parody that, while it worked, wasn't anything spectacular. Rapidly, though, MacFarlane and his writing team began to introduce more complex and challenging ideas into the episodes. The balance of humour, drama, action and allegory was a tricky one to get right, and while the first season had some great material, it wasn't until the second that it really clicked into place. Now, having broken away from its original network, MacFarlane is free to make The Orville what it always could have been: serious science fiction.

While we're only two episodes in at time of writing, and there may well be funnier episodes to come, the season is off to a very serious start, with a powerful opening episode in “Electric Sheep.”

The climactic and devastating battle against the robotic Kaylon during season two has, gratifyingly, major consequences. If you missed that battle, or you just can't remember that far back, then don't worry, because there's an action-packed recap to bring you up to step. In a nice touch, it's revealed that this is a dream sequence, a nightmare experienced by young Marcus Finn (BJ Tanner) as he struggles to cope with the aftermath of the attack. Marcus is in a difficult position, emotionally, as his mother, chief medical officer Dr. Claire Finn (Penny Johnson Jerald) still harbours feelings for Isaac (Mark Jackson), the Kaylon officer who betrayed the ship before turning against his people to save his crewmates. Feeling betrayed by Isaac, Marcus is unable to get used to the Kaylon still working on the ship.

It's not only Marcus who is angry that Isaac is still there. Other crew members leave the mess hall when he enters. New transfer, Ensign Charley Burke (a very likeable Anne Winters), the last survivor of the USS Quimby, is the only one with the guts to say to his face how everyone is feeling about his presence. Refreshingly, the senior staff aren't uniformly on Isaac's side, with Gordon Malloy (Scott Grimes) admitting to Charley that he agrees with her and is angry Isaac is still onboard. Captain Ed Mercer (MacFarlane) struggles to justify his decision to keep Isaac onboard and his plea to the top brass that the android doesn't pose a threat, when many members of his crew justifiably can't trust him.

It's strong material, weakened only by coming too late. The two-part episode that saw Isaac's about-face and the Kaylon invasion, “Identity,” was five episodes before the end of season two, and dealing with the fallout seems overdue. However, in an unexpected way this is a strength, as it gives the script a chance to deal with the long-term repercussions of Isaac's presence and the crew's attitude to him. When the word “Murderer” is scrawled across his laboratory wall, it seems that things have come to a head, and the revelation that young Marcus is the perpetrator is powerful.

All through this, though, Isaac has passively absorbed the vitriol thrown at him. The only response that he gives that even verges on emotional is a detached curiosity at the human phenomenon of hatred. This makes it all the more infuriating for the human crew members who are expressing that hatred: there's no satisfaction is the object of your hatred isn't affected by it. The drama of the episode appears to revolve around the damaged crew dynamic and the strained relationships between the (mostly) human characters.

Until Isaac kills himself.

It's an astonishing moment, all the more powerful for how quiet and understated it is. Isaac, alone in his lab as usual, sets up a precision EMP that fries his systems and memory. The crew now wrestles with the aftermath of this, with both the ones opposed to his presence and those in favour of it wrestling with guilt, anger, sadness and relief.

It's a powerful exploration into the motives behind, and warning signs of, suicide. In so many cases, suicide comes as a shock to those who knew the deceased, seeming to have come out of nowhere. Isaac, displaying no emotion, gives no indication of the turmoil inside that leads him to take his own life. There are those of us, due to our upbringing, our neurodiversity, or simply the way we're wired, who aren't comfortable showing honest emotion. Isaac displays no emotion, but clearly, beneath the surface, he is breaking.

Of course, Isaac allegedly operates on a basis of pure logic. This is the part that really gets to the core of why people commit suicide. Isaac calculates that it would be better for him and the the crew if he died. That's what it's like to be suicidal – the clear, honest conviction that everyone would be better off without you.

The episode plays with the notion that Isaac will stay dead for an admirably long time, but the inevitable occurs. This is sci-fi after all, where even flesh-and-blood characters don't stay dead. Engineer LaMarr (J. Lee) comes up with a one-in-a-million chance to restore Isaac's consciousness from a fragmentary back-up. Only new whizz Charly has the four-dimensional skills to reassemble his quantum bits and pieces, an obvious contrivance but one that is played extremely well when she refuses to help. Ultimately, she complies with the order, and Isaac is restored.

While I wish MacFarlane and the creative team had the guts to actually kill Isaac off, his resurrection is ultimately played well, positioned as a near-miss attempted suicide. Once he's out the other side, Isaac is able to begin adjusting to the feelings – or his electronic equivalent – and start to work through it. That's perhaps the most important message of the episode: that if you can get through that one, terrible, end-of-the-road night, the next day you may have the strength to keep going.

“Electric Sheep” has its flaws: it's a little overlong, the sideplot involving the Orville's new fighter shuttle, the Pterodon, takes up too much time away from the main storyline, and some of the plot contrivances are a little too neat. It's still a remarkably brave story for the series to run, exploring grief, guilt, hatred and forgiveness honestly and unflinchingly.

Email ThisBlogThis!Share to TwitterShare to FacebookShare to Pinterest
Labels: reviews, The Orville