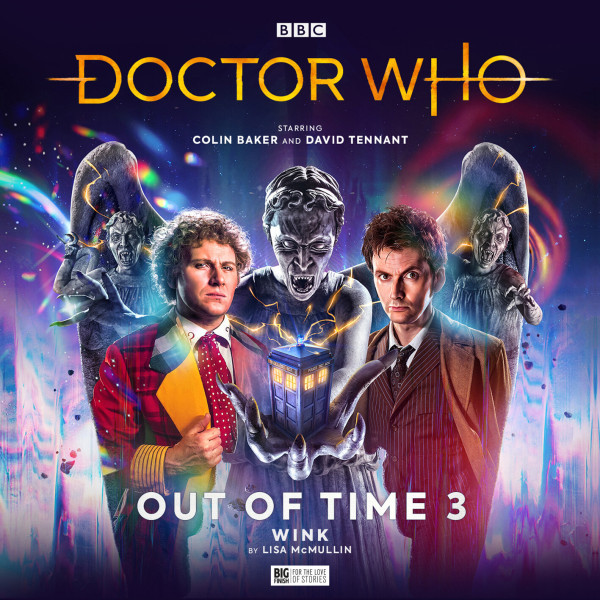 The third, and officially final, release in Big Finish's Out of Time series (although I'd be astonished if Tennant doesn't return with McCoy, McGann or Even Eccleston in the future), is "Wink," a clever response to the 2007 classic "Blink" and subsequent stories featuring the Weeping Angels.

Having faced the Daleks with his fourth incarnation and the Cybermen with his fifth, you might expect that the Tenth Doctor would face another classic Who monster alongside his sixth self. However BF instead pit them against the Angels, further  cementing their status as the top monster created for the revived series. It's not the first time BF have used the Angels, and they still seem a difficult and strange choice for audio.  Lisa McMullin's "Wink," though, utilises them in a genuinely inventive and effective way.

The story sees both Doctors arrive on Lucidus Silvara, a planet that is bathed in all-encompassing white light that blots out everything else, rendering anyone who arrives there essentially blind. The colonists on the planet have therefore developed into a civilisation that doesn't even have a concept of sight. McMullin puts real thought into how such a society might function, including a fascinating art gallery based entirely on immersive soundscapes. The people's use of a vague, undefined sense called "intuit" is a bit of a handwave though. Props, though, for crafting a script in which the dialogue is as natural as it is here, without any of the "point and describe" style that Big Finish so often falls victim to.

Such a place would seem like a perfect hinting ground for the Angels, but it's more complex than that, and the beings are fleshed out in some interesting ways. The Angels have been drastically overpowered in return appearances, but "Wink" makes some of the these abilities a strength, notably including their use of a dead victim's voice in a far more dynamic and effective fashion than originally managed in "Flesh and Stone." We're also given a fascinating insight into the Angel's reproduction, a cleverly high-concept development from their previously seen abilities.

Putting the Sixth and Tenth Doctors together was bound to result in something of a stand-off. Pitting the Sixth Doctor against the only incarnation who's more full of himself than he is could have been explosive, but Six behaves with remarkable restraint. Baker gives a strong performance, while Tennant occasionally veers into the self-parody he was guilty of in his alter episodes. It does lead to some fun sniping between the two incarnations, who are more similar than they might like to admit.

Together with fine support from Joanna van Kampen and Ayesha Antoine as one-off companions Estra and Padilla, and Clive Hayward as the Angel Dax, "Wink" works very well and is ultimately the strongest of the Out of Time line.

Placement: The Tenth Doctor appears to be on his runaway side-trip between The Waters of Mars and The End of Time, but isn't spouting on about Time Lord Victorious stuff so probably nearer the latter. For the Sixth Doctor, more uncertain, although Ten gives him the idea of dressing in blue so before he first does so in Real Time. Given that he's travelling alone, perhaps just before he meets Evelyn in The Marian Conspiracy.