Who here watched Attention Scum! back in the early days of this century? Oh, just me then. Nonetheless, I feel moved to speak of my enjoyable evening in Hove, on perhaps the very point, nebulously defined, whereapon Brighton and Hove meet and intermingle, and the one becomes the other. Sorry, I went to see Simon Munnery last night, and his mode of speech does rub off on one after a while. It was a very enjoyable hour or so of peculiar stand-uppery at The Old Market Theatre, made all the more special by our meeting him briefly in the pub beforehand, and watching the second half of the Ajax-Man Utd match (although he did miss the last ten minutes or so, what with having a show to prepare). It was a fairly short gig, but I'd prefer something brief and hilarious to something that drags on for hours on end to diminishing returns. And, though there was a fair amount of old material, it was his finest old material, old favourites such as the legendary Sherlock Holmes monologue, along with such new treats as a punk rock musical depicting the fate of the airship R-101.

What else has occurred in my life of late? Very little blogworthy, I'm afraid, being for the most part too uninteresting to speak of, and happily, just occasionally, far too unseemly for polite conversation. I'm lagging behind appallingly in my writing, owing all sorts of pieces to a number of people, to whom I apologise. I ask you not to fret, I've a week off coming, and plan to cram in as much typing as I can, although my birthday celebrations will no doubt take up a good deal of my time. 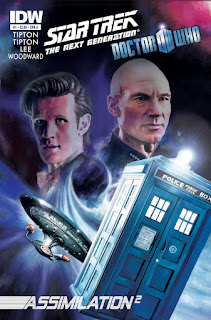 Who geeks and Trek geeks alike pop in to see this blog's bloggings, and will no doubt be aware that IDW have announced a new crossover title. Well, it had to happen eventually. As far as I know, there has never been an official, licensed crossover between Doctor Who and Star Trek before, although fanfic and cheeky meta-references abound. Now that IDW hold the comic rights to both, it's hardly surprising that they've gone for it at last. They've gone a bit crossover happy altogether recently. I'm not entirely sure that the current TARDIS team and the crew of the USS Enterprise-D are best suited to each other. I'd have thought the Doctor would fit in better in the more colourful bridge of the original Enterprise, but the classic crew have already crossed over this year with the Legion of Super Heroes. What's more, both Doctor Who and Star Trek have referred to each other as fictional creations. Still, with holodecks and Lands of Fiction around, this needn't matter at all, assuming they don't simply ignore the problem completely. Has there ever been a Trek-Wars crossover done officially? Surely that's the next step, and what with Star Wars happening a long time ago, in a galaxy far, far away, a short trip in a wormhole could easily bring the franchises together; and I'm sorry, but it has to be Kirk in that one. I love Jean-Luc, but I can't see him swinging a light sabre.

And what of my other favourite show, my latey-neglected Red Dwarf ? Series Ten is in the works, set to air on DAVE later this year. I'm trying to remain optimistic, but the last outing, Back to Earth, was very hit-and-miss, with too much miss and far too little hit. Hopefully getting the show back to an ongoing series and back in front of a live audience will revitalise it, but I'm not sure. It has, however, made me realise it's high time I got the original run on DVD (my dusty old videos have pretty much had it now). I still feel that the best future for Red Dwarf is on audio. Big Finish should get the rights, get a couple of new writers on board to shake things up. It doesn't matter how old the cast gets, and there'll be no wasting time and money on visual effects. Half hour episodes for the radio and download purchase, released in twos or threes on CD. Get it back to being a proper sitcom in space; focus on the Lister-Rimmer relationship. It could really work.
Posted by Daniel Tessier at 17:24