Time for another CAPTAIN'S BLOG! This time, we've stepped back in time a hundred years to the original Star Trek, and watched original pilot episode, The Cage, the second pilot, Where No Man Has Gone Before, and the first regular episode recorded, The Corbomite Maneuver. Pure command gold. 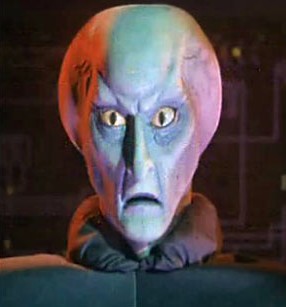 1.0) The Cage
or
‘Captain Pike vs the Bumheads’

Planets visited: Talos IV, in the Talos Star Group, where an Earth ship went missing eighteen years ago…
Also, we see illusory images of Earth (just outside Mojave), Rigel VII and one of the Orion Colonies. The first two are from Pike’s memory, but the third is from his imagination, so may not be ‘realistic.’

The Mission: Heading to Vega for the hospitalisation of injured crewmembers, the Enterprise answers a distress call.

Alien Life Forms: ﻿
The Talosians, aka the Bumheads, are humanoid but have small, weak bodies with huge oversized crania. They have incredible powers of telepathy, allowing them to create convincing illusions, although there are limits to their power. The veins on their scalps throb unpleasantly. The production uses male voices but female actors, giving an uncanny effect. The Talosians destroyed their own civilisation and left their planet a wasteland, and now wish to breed a new working caste to rebuild their society.

Rigel VII is home to huge, hulking brutes called Kaylar, massive warrior men with fangs. Orion women are green and apparently “like being taken advantage of.” The cages on Talos include a hairy, ape-like beast and a vulture-like bird-creature (actually both partial costumes from The Outer Limits).

Space Bilge: THE WOMEN! Why does Spock keep shouting? Did Nimoy not notice that everyone else was talking at normal volume? Space girl Vina is a showcase in bad acting. Why are they taking casualties from Rigel to Vega? They’ll pass directly by the Solar System. Why not just go back to Earth?

Sexy Trek: Where to start? This is one sexy episode! Pike is paired with Vina, the only surviving human from the spaceship crash, in order to breed a new human workforce for the Talosians. She’s a blonde in a tiny metallic minidress, but takes a turn as a gyrating green Orion slave girl in an illusory sequence. When Pike is reluctant to settle down to a life in captivity with her, THE WOMEN! are taken from the Enterprise as reserve choices. Number One fantasises about him secretly, while Yeoman Colt is described as having “unusually strong female drives.”

Future Treknology: They don’t have phasers yet - they use laser guns, and an impressively enormous laser cannon.

Future History: Later episodes date this episode to eleven or twelve years before the main series, i.e. about 2254.

Captain Christopher Pike: I love Captain Pike. Jeffrey Hunter is amazing in this. OK, so he’s a bit earnest and old-fashioned, but Pike shows a humility and sensitivity that Kirk rarely does, showing that he really cares about all the lives he puts at risk.

Green-blooded Hobgoblin: Spock is very different here. He’s young and enthusiastic, comfortably displaying emotion. The character was revamped for the series proper, and it’s clear that a lot of the personality of Number One was reworked for him.
Famous Firsts: First ever recorded episode of Star Trek. First appearances of Captain Pike and Mr Spock. First appearance of Majel Barrett in the franchise.

1.1) Where No Man Has Gone Before
or
‘Captain Kirk vs His Best Mate’

Planets visited: Delta Vega, a barely habitable planet far from inhabited space, with only an automated refinery in the way of civilisation.

The Mission: To probe beyond the edge of the Galaxy, where no man has gone before.

Spatial Effects: The Galaxy is revealed to be surrounded by an energy barrier, that damages ships passing through it. Those humans displaying ESP ability are killed, except for a particularly gifted few, who develop powerful psychic abilities. Also, their eyes go silver and they go nuts.

Sexy Trek: Mitchell is the incorrigable flirt that Kirk will later become. In the big fight at the end, Kirk is already showing flesh. Starting as he means to go on. 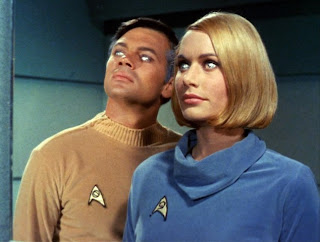 Funny Bits: Spock is still shouting when he’s on the bridge. Do the bridge systems do something to Vulcan hearing?

Space Bilge: The effect used for the energy barrier - a swirly pink band - does make it look like the Enterprise could just go round the thing.

You’ve also got to wonder, in the light of travel times in later series, how the Enterprise could even get to the edge of the Galaxy in less than a matter of decades. However, it’s possible they aren’t travelling to the actual edge (around 30,000 light years from Earth at its closest point), but to the maximum extent of the matter above or below the galactic plane (a comparitively modest 2000 light years or so).

Future History: The Valiant, an Earth spacecraft, probed beyond the Galaxy’s edge some time after being launched in 2065, two hundred years before this episode. That’s only two years after the first warp flight, according to Star Trek: First Contact.

Captain James T: He’s put through the ringer a bit here, losing his best friend to madness and being forced to fight him to the death. He’s already getting quite chummy with Spock. The gravestone Mitchell makes for him has his name as James R. Kirk.

Green-blooded Hobgoblin: Admits that he “felt for him too,” when speaking to the Captain about Mitchell. Spock isn’t affected by the energies of the barrier; retrospectively, this is odd, given his powerful telepathic abilities in later episodes.
Famous Firsts: First appearances of Captain Kirk, Sulu and Scotty.
The Verdict: Classic. Mitchell and Dehner are introduced as if they’re main series characters, which makes it all the more affecting when they’re killed. There’s a genuine sense of the mystery and danger inherent in exploring space, but the scientific elements never outway the emotional. This is a great start to the series. Pity they didn’t actually start the series with it.

1.2) The Corbomite Maneuver
or
‘Captain Kirk vs the Spaceballs’

The Mission: Chart an unexplored area of space, home to unkown dangers.

Sexy Trek: Kirk starts the episode topless and sweaty, working out in sickbay. He even walks the corridors of the ship like that. You’d never catch Pike behaving like that. 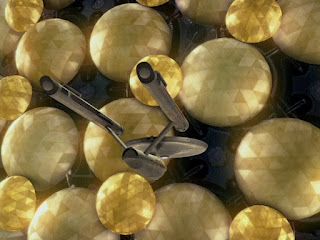 The Enterprise encounters a warning buoy in space, a coloured cube that blocks the ship’s way and emits lethal radiation. It’s destroyed easily enough, but they are next confronted by the Fesarius, a mile-wide spaceship from the First Federation. It appears to be composed of hundreds of interlinked yellow spheres, and is apparently capable of annihilating the Enterprise. Some of these spheres split off to form a tiny pilot ship, which is capable of towing the Enterprise behind it.

Alien Life Forms: The First Federation is an advanced civilisation in this area of space. The only individual we see, Balok, at first appears to be a gaunt, grey-skinned humanoid, but this is revealed to be a puppet. The real Balok looks like an ugly little kid with bad teeth and fuzzy eyebrows, with an adult voice, and is much, much creepier than the decoy. He reveals all the talk of destroying the Enterprise has been a test of the crew’s character.

Given the smoke-and-mirrors tactics of Balok here, it’s questionable whether the First Federation are as powerful as they appear.

Space Bilge: Stressed-out navigator Bailey’s breakdown on the bridge starts effectively enough, but it soon becomes hard to keep a straight face. Balok pronounces his name as Bay-lok, but everyone else says Bal-ock.


Captain James T: Pretty awesome in this episode, facing down an unknown and powerful intelligence with a poker face and keeping his cool in the face of apparently imminent destruction, although he does lose his temper with Bones.

Green-blooded Hobgoblin: Much more like the Spock we now know, superior to his fellow crewmen but capable of banter with Kirk and some classy put-downs.

The Real McCoy: Hurrah, Bones is here at last! The good doctor isn’t afraid to go head-to-head with Kirk over Crewman Bailey’s treatment, and treats the captain harshly in his medical. He sticks him on a salad only diet, probably just to annoy him.
Famous Firsts: First appearances of Dr. McCoy, Uhura and Yeoman Rand.

Verdict: The first regular episode of the series is a bit of a belter, surprisingly so considering that it’s basically a bottle episode and very little actually happens. It’s all down to the tension in the regulars’ performance, giving a real sense of jeopardy. Bailey’s a weak link, but he’s supposed to be. Kirk, Spock, Sulu, Bones and Uhura are all there; the crew we love is coming together.