Here at House Tessier we've decided to set up a semi-regular telly treat. My sister Becca and my good friend Louise, and anyone else who happens to be sucked in, are going to sit through Star Trek: The Next Generation. All of it. Eventually, anyway; Louise has Season One on DVD and we'll get hold of the rest as we go through the series. To go with this latest view-a-thon, I've decided to little mini-reviews of each episode (I should have done this for Buffy and Angel. Too late now). I know Trek can get bloody po-faced at times, but don't worry, I'm going to keep this light-hearted. Trek is best approached like that anyway; the three of us hardly stopped laughing at - sorry, with - these first few episodes.

I'm calling it CAPTAIN'S BLOG, and each piece will be broken up into little chunks addressing different aspects of the episode. I'll try to keep the entries reasonably consistent, but I'll fiddle with the structure throughout, probably. Enjoy this first entry, and I'll have the next one up whenever our next Trek session comes along.

1.1) Encounter at Farpoint
or
'The One With Q and the Space Jellies'

Planets Visited: Deneb IV, a grubby old dustbowl of a planet. It's described as being on the edge of explored space, which makes sense, since Deneb, or Alpha Cygni, is a mighty long way away. Then again, in Where No Man Has Gone Before, Gary Mitchell mentions a trip there with Kirk in their youth. The natives are called the Bandi.

The Mission: Assess the Bandi's amazing Farpoint Station for use as a base in return for Federation protection; solve the mystery of its magical powers; and prove to Q that humanity is more than just a "savage child race."

Alien Life Forms: Q, a superbeing from a higher continuum. John de Lancie is fabulous as Q from the outset, descending like a god but constantly taking the piss, mocking Picard while he freezes annoying crewmen. The space jellyfish are pretty cool, although space-dwelling aliens will become a Trek cliche before long. The Bandi of Deneb IV are the vaguest of all alien races.

Sexy Trek: The sexual tension on this bridge! Troi and Riker are past lovers, flirting telepathically while the captain speaks to them, while Picard and Dr Crusher have a mysterious past together too.

Funny Bits: "Permission to clean up the bridge!" snarls Worf the angry Klingon while Q hangs around.

Space Bilge: Seriously, Worf and Yar are a bloody liability, both trying to start a fight with an omnipotent superbeing. Yar goes immediately into "I'm as good as any boy!" mode, while Worf grunts and nearly shoots a hole in the viewscreen. Meanwhile, Troi sepnds the entire time looking gormless and wittering on about 'great pain and sorrow,' instead of using her powers to come any useful conclusions.

Future Treknology: Amazing as it must have seemed at the time, Geordi's VISOR now looks bizarrely cumbersome. In fact, it's now rather odd that he'd even have a machine to cure his blindness, considering that we'll probably be able to grow replacement eyeballs in the lab within the next decade.

Cross-references: Admiral McCoy turns up for the symbolic handover, making racist comments about Vulcans just like the good ol' days. It's poignant to watch now, with DeForest Kelly no longer with us.

The Picard Manoeuvre: Jean-Luc is clearly having a bad first day at work. He bitches at Worf, treats Riker like an unawanted work experience student, and tells Dr Crusher he'll have her transferred off the ship! Then he randomly tries a saucer seperation at high warp, and orders Riker to do it manually just to test his nerves. Damn, this man needs a cup of tea.

Verdict: Just bizarre. Watching it now, Encounter at Farpoint barely feels like TNG. There are some cool ideas on offer, and the new crew are immediately an interesting bunch, but it's all very slow and worthy. The mystery of the station shouldn't take them so long to work out, and nor should it prove to Q that humans have evolved beyond their savage past. The Q scenes liven things up, and get decidely surreal at times, particularly in the mocked up courtroom full of jeering dwarfs.  It's certainly an odd experience, enjoyable enough, but there's a lot of work to be done here.

1.2) The Naked Now
or
'Sex Trek: The Next Penetration'

Alien Life Forms: Some kind of intoxication virus that doesn't show up on scanners.

Sexy Trek: Blimey, everyone's getting it on in this episode. Troi comes on strong to Riker, who is forced to be all responsible and behave himself to save the ship, while Picard and Dr Crusher almost get in a clinch in sickbay. But it's Yar that tops it, slinking down the corridors, snogging some random crewman, and then taking Data's cyber-virginity. She disappear's for a bit after that. She's probably sat in her quarters replicating vibrators.

Funny Bits: Picard and Crucher's drunken exchange is genuinely funny, thanks to great performances from both of them. The happy Chinese enginner, playing Jenga with computer chips, gives me the giggles. Data's steals a scene with a dirty limerick: "There was a young lady from Venus, whose body was shaped like a - "

Space Bilge: Everyone is acting randy and adolescent, except for the only actual adolescent around, Wesley Crusher - who takes the opportunity to lock himself in engineering and play at being captain. He's even made himself a sort of Picard toy, that gives him orders in the captain's voice. What an incredible prat.

Future Treknology: Dr Soong programmed Data with sex moves, the dirty old bastard. And how the hell does an android catch a virus anyway? 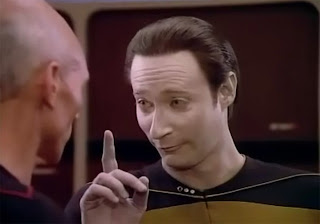 Cross-references: This episode is a sequel-of-sorts to the original series episode The Naked Time, and includes a name check for the original Enterprise and Captain James T.

Verdict: Absolutely hilarious. Really, this episode's a riot. However, you can't mistake that for it actually being any good. This is pap, but entertaining pap. Chief Engineer McDougal is the only convincing character in the whole episode, and we never see her again.

Planets Visited: Ligon II, AKA the Planet of the Black People.

The Mission: Conduct diplomatic talks with the Ligonians in order to get medication for a deadly plague sweeping a Federation planet.

Alien Life Forms: The Ligonians are primitive natives from deepest, darkest Planet Africa, with a hint of inscrutable orientalism thrown in.

Funny Bits: Geordi teaching Data about jokes is funny if you like crap jokes. Fortunately, I do.

Space Bilge: Not only do the Ligonians make their women fight for the right to be the king's main bitch, their weapon of choice is a metal boxing with nails sticking out of it. Poison-tipped nails, that kill instantly even if you're just an extra who happens to brush past them accidentally.

Future Treknology: But even killer boxing glove poison is no match for Dr Crusher and her hypospray. Death: now curable.

Verdict: Just terrible. A nasty taste of racism and sexism sours this whole episode. Sure, we laughed, but only in a "Oh my god, I can't believe they're doing this" kind of way. This one would have been embarrassing even in the original series.