OMFG are produced by October Toys. It's a crowd-funded project, with character designs chosen from a vast selection sent in by members of October Toys' forum.  Series One came out last year, and Series Two has just arrived - well, I got mine a bit later, what with shipping times from the States and all.

Each series consists of five characters. S1 has the Crawdad Kid, King Castor, Multiskull, the Phantom Shithouse (!) and Stroll, while S2 features Grimm Gourd, Shirtle, Cuddlehard, Cry-Borg and the delightfully named Puke Knight. Originally I was going to keep them in their boxes, but I decided no, they're made to be displayed properly. Here's all ten, plus a ZOMBIE Ape (also from October Toys) for comparison: 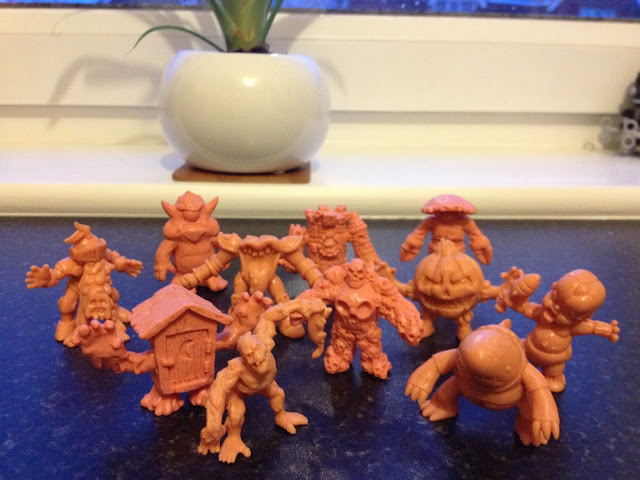 My favourite from the first series was Multiskull, due to the impressive level of detail on the sculpt. Out of S2, I'm a little torn. They're all more imaginative than the S1 monsters. Puke Knight is actually two figs that fit together, which is a nice touch, and I like how Cuddlehard acts like the personification of the OMFG logo. However, I think it's the half-shakr, half-turtle Shirtle that is my overall fave. He's just so adorably stupid-looking.

Small quibble: I've got the standard flesh-coloured sets, which are the basic sets for those contributing to the crowd-fund campaign at a low level. It's a bit annoying that the S1 and S2 flesh colours aren't quite the same. OK, it's a petty, pedantic niggle, but we collectors are petty, pedantic people. I'm tempted to buy a set of the exclusive colours, but there are so many to choose from. This is a sure-fire way to waste money... 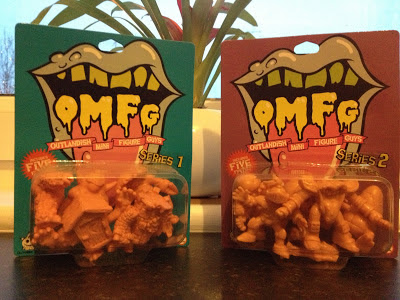 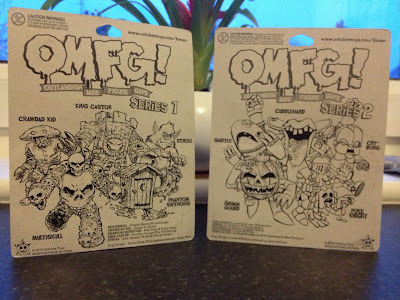